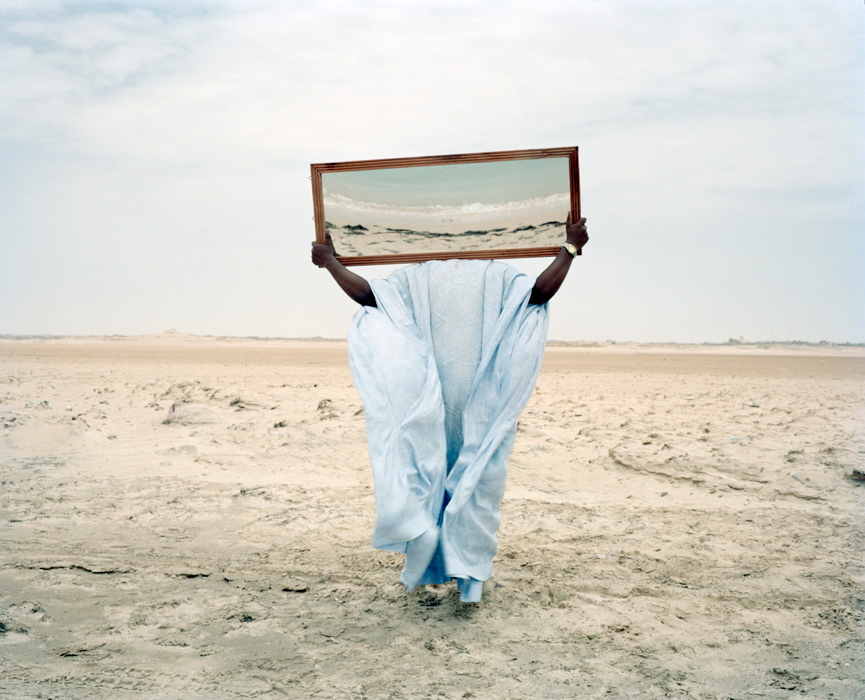 Dawit L. Petros’ “The Stranger’s Notebook” is the first of a trilogy of works in which the Eritrean artist investigates “migration as a key constituent of modernity.” Consisting of large-scale color photographs and a number of videos and recorded sound, the exhibit documents Petros’ 13-month journey throughout West and North Africa, as well as to Italy, Germany, France and the Netherlands.

Petros lives in New York City. “The Stranger’s Notebook” references Albert Camus’ famous 1942 novel “L’Etranger (The Stranger),” in which the French philosopher wrote about “the experience of outsiderness.”

Another of Petros’ key touchstones was “About the Author’s Journey,” a travelogue by the 19th-century Eritrean writer Fesseha Giyorgis, who wrote, among other things, about the Eritrean occupation under Italy. Giyorgis’ text, written in early Tigrinya (the main native language from Eritrea) has changed so much linguistically that Petros could not totally decipher Giyorgis’ words. The incomplete understanding of Giyorgis’ writings led Petros to create deliberate gaps in understanding related to works in his show; e.g., video screens obscure other video screens, and certain actions in the videos are unreadable, as in “The Shop.”

Twelve beautifully mounted photographs of the sea and ocean are the first images the viewer sees when entering the gallery.  Most of the photos are of churning, frothy waters which appear to be from a variety of different areas.  It’s not necessary to know the theme of Petros’ work to feel the possibility of danger in these pictures, which crowd on the wall like a liquid abyss.  Many migrants have drowned on their desperate journeys from Africa and the Middle East to Europe, including thousands of Eritreans, and these photos suggest how unmerciful water can be.

Three of the images depict calm waters, with a shoreline in sight, implying the potential safety of a new land.

Another striking montage is “A series of complicated ambivalences, Bamako, Mali,” 12 images of men  carrying prayer rugs or prayer beads walking in front of blue and white signage. It is visually impressive and, as in most of Petros’ photos, we see no faces.  By focusing on what the unidentified men are carrying, Petros ensures, subtly, that we take note of the importance of faith in this country.

Two triptychs — “The Green March (Beyond the conclusive logic of monumentality), Tamougrite, Morocco” and “Indigo (Beyond the conclusive logic of monumentality, Part II), Cap Spartel, Morocco”— defy their unwieldy titles to pose dramatic images of colored cloths floating breezily in the skies. Once again, these photos are exquisite but, as with much of Petros’ work, the viewer must work hard to decipher the artist’s intent.

“Act of Recovery (Part I), Nouakchott, Mauritania” (2016) must be one of the most dazzling marine photographs ever. Ten men, backs to the camera, stand on a beach while contemplating the shipwreck of a small sailing vessel.
Beautiful and tragic simultaneously, this image calls to mind the great sea and shore paintings of the 19th-century French artist Eugene Boudin, who was characterized as “the king of the skies.” In this work, as in many others, Petros’ picture of the sky is as cosmic as it is literal.

Eritrea, located in the Horn of Africa, has one of the worst human rights record in the world, and the least freedom of the press.  It also has compulsory military service, which is one reason why so many men try to escape, primarily to Italy. Petros’ art is ambitious, thoughtful and visually arresting.  It aims to tell stories about regions and ways of life most of us know little about.  Regrettably, the imagery in this show touches the intellect and the eye, but the heart is barely acknowledged. We miss the personal in Petros’ art, and he works in an arena that is nothing if not gut wrenching.