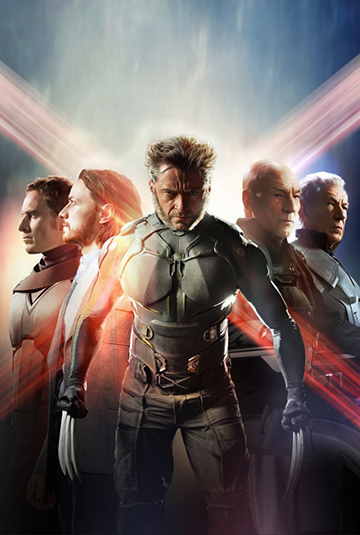 Right out of the gate, it is imperative that, if you are a super hero fan and you are not yet sick of the unrelenting onslaught of hero-themed films filling our eyeballs these days, stop reading and go see this movie. For real. I’ll wait.

While many seemed to enjoy X-Men: First Class (2011), I on the other hand was extremely disappointed. I loved the premise, most of the cast and small portions of the film, but in the end, I felt like it was an unbalanced attempt to re-spark a film franchise that miserably failed its fans with X-Men: The Last Stand. Just my opinion. However, holy crap snacks! X-Men: Days of Future Past is light-years superior to both those films and is a high-contender for one of the best films this summer.

Directed by Bryan Singer (as you may remember, the director of X-Men and X-Men 2) and loosely based on a 1981 two-issue storyline (issues 141-142) in the pages of the Uncanny X-Men, Days of Future Past is a highly-engaging, high-concept summer flick that should satisfy hardcore and mainstream audiences alike. With a returning cast which includes Hugh Jackman, James McAvoy, Michael Fassbender, Jennifer Lawrence, Halle Berry, Ellen Page, Patrick Stewart and many more, this film has raised the bar in terms of balancing a large cast while telling a interesting story.

To be honest, I am shocked at how good it is.

The film in a nutshell:
The future is bad. Real bad. Mechanized, mutant hunting peacekeepers called Sentinels have evolved and nearly wiped out both mutant and human populations. It seems in our government’s attempt to control fear, that fear became realized and backfired. Now, only humans with no trace of a mutant strain are allowed to exist. The last of the X-Men are trying to survive and, in a last ditch effort to save the future, Wolverine must go to the past, bring friends, now enemies back together and stop an event that triggered the domino effect of hate. Effin’ Groovy!

The Good:
First and foremost, the best part of this film is how the mutant powers are showcased. Leaked onto the Web near a month ago, audiences were allowed to watch an opening sequence where six X-Men try to hold off a Sentinel attack. I wish I never saw that. Seeing it on the big screen is fantastic and I spoiled it for myself. Fluid and seamless, the X-Men each showcase their skills as a team in a gorgeous way that had never been shown in this franchise. A huge standout is Bingbing Fan’s Blink and how the director and writers choose to show how she uses her abilities for herself and her team.

Speaking of powers – Quicksilver is flippin’ wonderful! While his costume in the released promotional photos looks ridiculous and sad, Evan Peters’ portrayal is both fun and another shining moment for the film. Not even close to the arrogant, snobby, aristocratic Quicksilver I grew up with in the comics, this different take on a young mutant is a ton of fun. I really enjoyed how he was used and, in comparison to First Class, why he as a character was relevant to the overall story – a problem I have with most of mutants showcased in that 2011 film.

And that’s just stuff that happens in the first half of the film. I haven’t even gotten to how well Hugh Jackman carries this film or how, in comparison to X-Men Origins: Wolverine (2009) and The Wolverine (2013) the character of Wolverine is able to be highlighted and well represented. Nor have I even mentioned how the rest of this all-star cast, regardless of the amount of screen time, add to an excellent movie-going experience.

Yet, even with all of that, the best thing about this film is the story. An issue that has plagued this genre of films for a long, long time. Our summers have been sunburned too many times by effects-driven movies with too little substance. From any of the three already released Transformers films to the last three Spider-Man films to the Man of Steel, an inconsistent representation of super films have been allowed to be released and, in my opinion, damage the importance of comic book lore to our popular culture. Turning Days of Future Past into a film was already a difficult feat, but delivering such an outcome this solid is amazing and should prove high box office results that will last throughout this season. The idea of mutants is already a stretch for some audiences to get behind, but time-traveling consciousness with ripple effects to a time stream makes it that much harder, and while other franchises like Doctor Who and Terminator have proven success, they have also failed at times (mostly Terminator). The writing team behind Days of Future Past should be commended for being able to take a core story, breaking it down into understandable chunks and then piecing it back together in a way that never talks down to the audience and remains entertaining throughout the entire film. Well done.

The Not So Good:
While not perfect, there are a few things in the film that, in my opinion, could have been represented just a little differently. Mainly in regards to the the Sentinels. There are two versions shown in the film. Why they are different is a story point so I won’t get into that, however, in the 1970s the design of the Sentinels just bugs me a little. I wish they looked a little more clunky and bulky like they did in the comic books. On screen, they have a very sleek, high-design that seems more technologically advanced for that time period. The look of them seemed out of place in my opinion.

Along with that, while I am fan of Peter Dinklage and I think his portrayal of Dr. Bolivar Trask (the developer of the Sentinel program) is well done, his motivation as a character seemed forced. In the original Days of Future Past story, the core character was a Senator whose platform against mutants was born from a hate and negativity for their differences. Clearly a metaphor for race relations in the late seventies and early eighties. Here however, it seems he is driven more by a fear/need for peace that while, in the wake of the Vietnam War is relevant to that moment of our history, seems more a statement based on our current events. The theme of hatred and bigotry against mutants has always been the backbone for why the X-Men are necessary and I wish in this film that theme was more in the foreground – like it was in X-Men (2000). As a character in this film, I never really dislike Trask like I did (and still do) Senator Kelly and so, for me, that was slightly lacking.

But honestly, that’s it.

A fun, smart super hero film that uses every ounce of its talent, X-Men: Days of Future Past is the film to see this summer. In the wake of an average (yet disappointing) Amazing Spider-Man 2 and a super-sized Godzilla, this is the kind of epic, big-budget summer film every one should see. Quality from start to finish, Days of Future Past is well worth the cost of admission and is a huge push in the right direction for more mutant films. Like I said, I was shocked at how much I enjoyed this film and that is coming from a highly opinionated X-Men snob who only has liked X2 thus far in the film franchise.