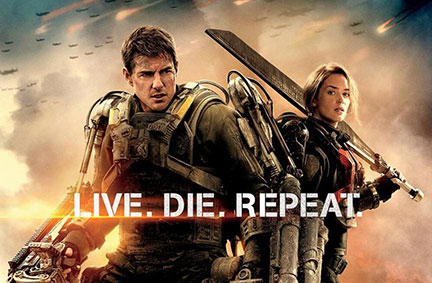 Pure popcorn munching, soda-fueled adrenaline racing goodness hits movie screens this summer with Edge of Tomorrow, Doug Liman’s latest action/adventure. Featuring money-magnet Tom Cruise partnered with a badass Emily Blunt, this film is perfect viewing on the soon-to-be-sweltering summer days. Visually stunning with a compelling (never boring) story-arc, Edge of Tomorrow does something that most films have failed at lately – blow lots of stuff up and be really loud, while remaining a coherent, interesting time at the movies.

Based on the 2004 novel All You Need is Kill by Hiroshi Sakurazaka, Edge of Tomorrow follows an American soldier caught in a time-loop where, every time he dies, he is made to relive the experience over and over again. Set prior to an all-out strategic offensive to halt an alien invasion, the soldier uses his experiences to become a better warrior and, eventually, learn why he has been blessed/cursed with this ability.

While it will be easy for many people to dismiss this movie as just “Groundhog Day with guns,” the combination of strong direction mixed with excellent visuals and two solid lead performances help it stand alone and hopefully will allow it be praised (and criticized) on it’s own merits. Honestly, I was surprised at how much I actually enjoyed this film. I am a fan of both Cruise and Blunt and I have enjoyed the past films of Liman, but to be honest, I’m just getting tired of watching stuff blow up. As a super-hero geek at heart, that’s a difficult thing to admit, but after watching New York, San Francisco, one of the Hawaiian Islands and Washington D.C. get torn to pieces, the idea of more explosions and debris just seemed like a sensory overload. To be fair … Edge of Tomorrow is that, however, it luckily comes in specific doses which help keep the experience balanced and the story an important part of why the action is occurring.

While Edge of Tomorrow does fall into well known and established Hollywood cliches along its way, the partnership of Cruise and Blunt keep the film from ever going too cheesy. With a strong chemistry and presence, the audience is never disengaged from their combined plot-line and, as the film progresses, the two characters are made to change their relationship in a way that feels seamless, sensible and natural. Cruise is, as always, a dynamic character to watch. Clearly, just as Liman commands the visual aspects of the film, Cruise commands the audience. Charismatic, charming and heroic, at every point in the film you are on his side and you want him to succeed. The same can also be said for Blunt. Presented as the stoic war hero, she quickly shreds a portion of the coldness and makes a stereotypical character into much much more. At the same time, I really appreciate the fact that the film never really allows her to ever become a “damsel in distress.” Too many times, the lead female character falls into this tired trope of needing her heroic male counterpart to save the day. Not here. While there is some softening, she remains the brave, strong, intelligent soldier that she is a presented as start to finish.

Along with the strength of the acting, the visual effects are phenomenal. While not as emotionally draining as Saving Private Ryan, following Cruise into combat was a fantastic rush that continually felt hazardous every time it had to occur. With a grittiness to the overall look of the film, weaponry, set pieces and alien life forms all reside perfectly beside one another. I was fortunate to view this in 3D, and while I am not a fan of the 3D experience, this film uses the technology well and uses it’s special effects to immerse the audiences in the more perilous moments. At the same time, the Mimics – the alien menace – look and move so beautifully that when viewed up close they are glorious. Organically scary, they are far removed from humanoid and are presented in a way that make each and every one of them feel beast-like, unpredictable foes.

However, while there a ton of things this film gets right, there are also a few things that, in my opinion, could have been delivered a little better. There are aspects of the film that feel very forced that essentially “dumbed-down” the experience. One character in particular is used to help explain the phenomenon that Cruise is experiencing and it just feels too convenient. All the details could have been ironed out in a more useful manner with less exposition and more creative storytelling. At the same time, while most of the film is well balanced in terms of action to story, there is a portion of the third act that highly resembles a section of The Matrix: Revolutions and quickly dissolves into loud bangs and flashy lights. Lastly, while I was still satisfied overall, I was slightly disappointed with the ending – but I won’t get into that … spoilers.

Overall, Edge of Tomorrow is a fantastic summer film. It’s not over-bloated with too many characters, the special effects are used well and the acting greatly enhances the experience. Condensed and focused, the story stays true to itself and presents an engaging ride that can go from harrowing scenes of war to funny mistakes Cruise’s character makes at any given time. While there are a few plot-points that I feel are not as strong as they could have been, Edge of Tomorrow is far better than I expected and a worthy contender for the best summer blockbuster this year.

4 out 5 minivans with trailer hitches