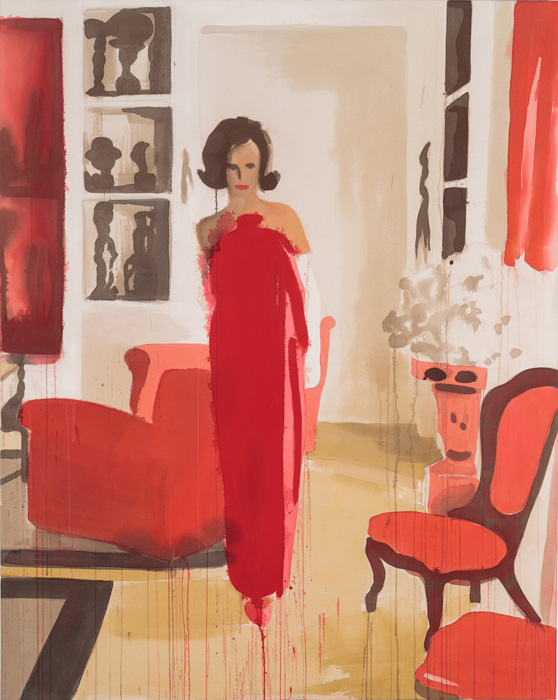 Nerman exhibit peers behind the facade of American normalcy.

Some of the seven examine sentiments surrounding family, home, and “domestic” as it relates to labor and immigration. Others explore discursive and even mythic modes of storytelling that reflexively focus on the process of image making and sometimes peripherally on something domestic.

“Storage” shows the front of a car that’s been backed into a garage or storage unit. The tight space is congested with shelves, wood, tarp and other detritus one might find in any similar space. That the car — so vividly present — solidly confronts us feels personal and meaningful. The bright shaft of light that rakes the left side of the painting imbues this car in this space with a certain solemnity, and the tarp draped across the front suggests that there is unfinished business.

Bollinger is known for his autobiographical paintings, and “Storage” may refer to his father’s car-part business, which, like many family-owned businesses, was shuttered by the crushing impact of big box stores on small businesses. “Dad’s Home Office” features an empty desk chair rolled back from the edge of a desk where a cigarette still burns in the ashtray. Light from the computer illuminates the chair seat, focusing attention on its owner’s absence. This and Bollinger’s other paintings are emotionally dense with the pathos of family and memory.

In unpeopled graphite drawings of quotidian spaces and things, Sean Lyman expresses here-and now-ness, of how we are simultaneously present — traces of human activity are in every piece — and absent. Despite their exquisite detail, these shadowy drawings of bathrooms, hallways, sinks and toilets are dreamlike and secretive. Why is a bathroom stall door detached from its hinges? What has happened or is about to happen behind half-opened doors? Or what is down that hallway? Lyman’s drawings are concrete images of place, and yet psychologically charged spaces of illusion and poetry. Dialectics of inside and outside co-exist, as we are visually inside these confining and tautly drawn spaces, and yet we exist physically and psychically outside of them.

In the monumental “American Gardeners (After David Hockney’s American Collectors, Fred and Marcia Weisman 1968),” Gomez inverts the celebrated British artist’s attention to the wealthy couple and paints instead the unnamed gardeners and workers who immaculately maintain the property.

“TENOVERSIX” is possibly another iteration of life on the outside margins of the American Dream. The laborer is bent over his broom in a way that renders his body headless. Not only is he unknown to us, but he is disembodied, perhaps suggesting his deep disenfranchisement. The sketchy painting style Gomez uses for the figure’s body is a telling contrast to the hard-edged, sharp paint style of the hot pink storefront. The sidewalk in front is an endless stretch of grey, perhaps echoing endless drudgery. In “Pacific Design Center #1,” the building and the lawn dwarf the groundskeeper who mows that lawn. The lawn seems as infinite and soul crushing as the sidewalk in “TENOVERSIX.”

In large color images Kiefer captures dozens of soaps, wallets, gloves, water bottles and other items that were seized during illegal border crossings and thrown out by customs agents. The groups of items are painful to see, as they are sad stand-ins for their owners. Yet the photos’ studied artistry — the soaps and wallets are artfully arranged to be visually appealing — diminishes their potential political impact and dilutes the documentarian element crucial to the series’ effectiveness. His aesthetic of loss, to borrow a phrase from writer bell hooks, may seem to fetishize, and therefore undermine, personal and collective suffering.

Springfield, Mo. artist Julie Blackmon’s unnerving hyper-realistic photographs of children in various stages of leisure suggest the many weird things about being a child: disorganized play and home life, the strange ways we come together with family and neighbors, and an often-chaotic family environment.

Blackmon’s photographs feature no adults (or only their legs), lending a messy sensibility to these photos, as if the children precariously ramble about or play in a pool with no adult supervision. In “Night Movie,” children are scattered around the dark back yard while “The Sound of Music” is projected onto a huge screen. The scene is the pivotal one where the Captain performs “Edelweiss” for his mesmerized children. Only two of the children in Blackmon’s photo are similarly mesmerized. The rest wander the back yard, play, or stand in front of the projector, creating a silhouette on the screen. It’s a touching and funny scene.

The “Flag Cake” children share a similar disaffection. They roam the back yard engaged in solitary pursuits: cartwheels, swing set playing, etc. A hula-hoop, soccer ball, roller skates and other toys lie around the weedy back yard. Blackmon’s composition leads us through the image toward the faraway shadows. This and her other scenes are at once pleasurable and discomfiting, as if we are anxiously waiting for something bad to happen. In her staged photographs, Blackmon intensifies that which is easily recognizable into dramatic and theatrical presentations of “real life.”

Liz Markus’s paintings of society women C.Z. Guest, Lee Radziwill, Slim Keith and others posing in highly abstracted interiors, are a sharp contrast to the more contemplative work in the exhibition. Markus relies on old magazine spreads for her root imagery, abstracting and breaking down the elements in the room, from the furniture to the clothing to the figures. The women, painted in minimal gestures on unprimed canvas, which allows the paint to bleed, drip, and spread, feel as temporal as time and fame itself, in a critique, perhaps, of the way celebrity culture invades our domestic spaces.

Ezra Johnson explores the formal relationships between paintings and films, straddling and uniting the spaces between, creating a circular journey. In the short film “Stranded in a House,” a morphing, abstract painted figure oozes across interior photos Johnson has culled from catalogues and magazines. Johnson continually constructs and deconstructs the figure throughout the film, emphasizing the figure’s and the medium’s plasticity.

The confluence of paint and animation disrupts specific narrative, instead creating a disjointed poetic journey that exists outside of any relatable measurement of time and place. The figure acts upon the interiors, blobbing across the photographed pages, while the soundtrack of footsteps and other ambient noises helps to push the figure along until the film and the figure’s denouement.

“A Time of Tall Statues” also features Johnson’s stop-action animation, accompanied by music and text. The fast-paced energy and imagery — odd and abstract figures, a car wreck, stacked logs, packaged grocery store meat — accrete into mythical otherness: a world that exists outside of linear narration and narrative painting, but is devoted to filmed painterliness, and disrupted, relentlessly morphing storytelling.  o