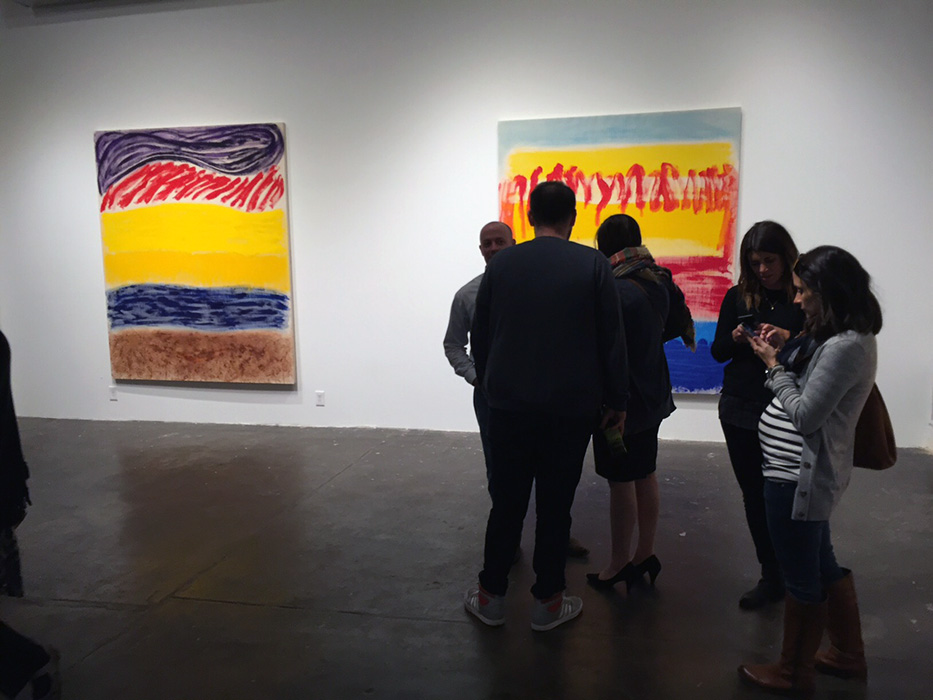 It looks like a high-end New York gallery show from the street, and things only get better inside. Abstractionist Don Kottmann’s “Primary Matters” exhibit of new paintings at Todd Weiner Gallery builds on the recent works that won him a prestigious Joan Mitchell Foundation grant last year, and one of them, the turbulent 2014 canvas, Lazarus Green, can be seen in the back room.

The five large banded abstractions in the front gallery evidence a calmer, more meditative demeanor than Kottmann’s Mitchell grant works, as if the artist had unraveled the looping gestural swipes of Lazarus Green and subjected them to a new painterly order. Weiner has the Mother Painting that birthed this shift on the premises; the bands of the new work are latent in the stacked and layered forms at the Mother Painting’s center.

On the one hand, Kottmann’s compositional simplification throws the reading of the new paintings, which all move from earth and sea hues at the bottom to sunset hues at the top, toward landscape. But the bands also serve to highlight the deftness and diversity of his paint handling, which includes long swipes and watery veils, stitch-like areas of gesture and grainy textured zones.

The unity of the series gives the exhibit a captivating gestalt that seems to follow an almost narrative line. The earliest paintings, Trois Bleus and Grey Matters, comprising ethereal floating bands with soft, luminous edges, declare an affinity with the canvases of Mark Rothko.

Then things start rocking. A wave-like motion begins to animate the painted zones, as if the artist had subjected his compositions to an electric shock. The hues become darker and more saturated, and gesture reemerges, most strenuously in the figure-eight swirl of purple above a red zone of multiple parallel strokes that tumble rightward like a row of dominoes in the canvas Yellows Central.

For all the intimations of impending breakout, Kottmann maintains the discipline of his more minimalist commitment. Yet stripe paintings these are not, and the artist, who divides his time between Kansas City and a teaching post in Canada, is no formalist. The works are richly symbolic in an understated way.

Kottmann says the show “is a tribute to the layers, complexities and harmonies that constitute our core.” He creates this tribute to the inner self with a visual appeal to the outer world of sun and sky, rolling waves, looming clouds, naked earth.

The changes enacted from one painting to another endow the series with the feel of a time-lapse sequence that captures the vagaries of the seasons, the span of a life, the evolution of a world view, or the ever-evolving human core—“that place,” Kottmann says, “where every action, thought, dream, and fear, has settled and where hope continues to soar.”

The metaphoric scope he achieves in these five large paintings—and there are two smaller Untitled ones mounted in a rear space—exemplifies the way abstraction can encompass both the workings of consciousness and the field it comprehends.