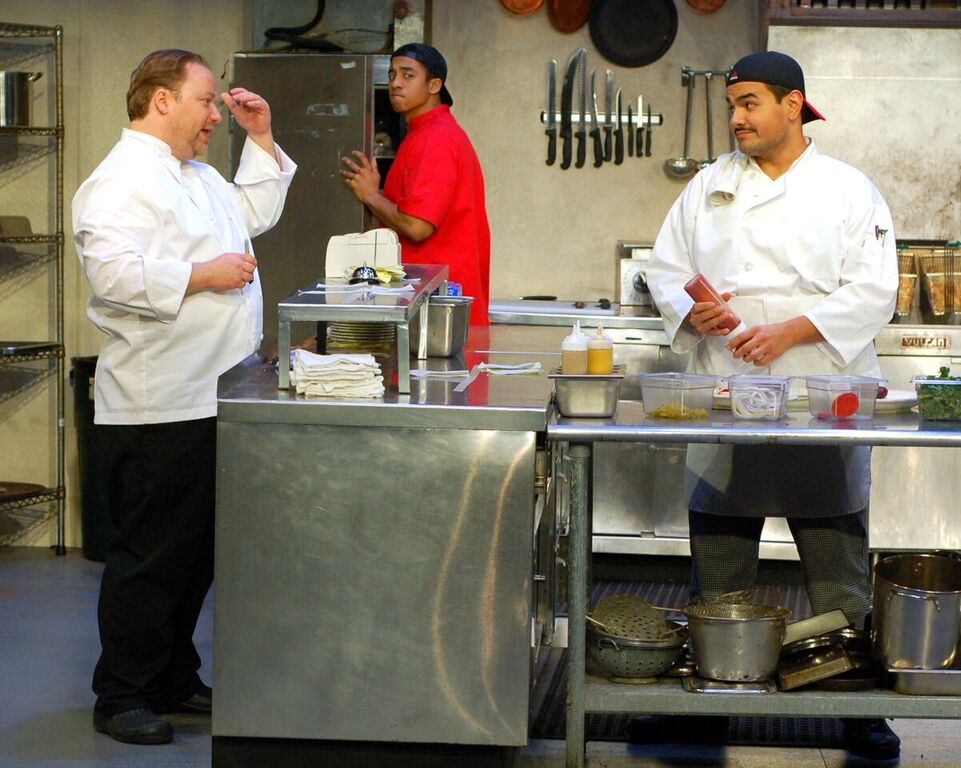 Anyone who has ever worked in a restaurant kitchen, struggled with addiction or faced a spiritual crisis will find plenty to relate to in Will Snider’s “How To Use a Knife,” a serious, provocative and often comic play receiving its Kansas City premiere at the Unicorn Theatre.

Snider’s long one-act — it runs an hour and 45 minutes without an intermission — provides a glimpse into the behind-the-scenes, multi-ethnic world from which hot meals come to restaurant patrons who give little thought to the people who actually prepare the food.

Snider’s play comes from the National New Play Network, a consortium of small theaters that includes the Unicorn. This is one of the NNPN’s “rolling world premieres”  that will introduce Snider’s play to regional audiences in different parts of the country in a series of independent productions. First staged in Sacramento, it opened earlier this month in Indianapolis and following the Unicorn production will be staged in Philadelphia. Each production is created by an entirely different cast and crew.

The Unicorn staging, directed by Sidonie Garrett, showcases a strong cast that collectively steers the show from the rowdy humor of its opening section to what the play is actually about — a sober (and sobering) meditation on addiction, ethics and redemption. Set in a restaurant serving denizens of Wall Street in lower Manhattan, the play unfolds entirely in the kitchen created by scenic designer Gary Mosby with a functioning stove and sinks with running water. This level of realism is a novelty, but it grounds the play. The two line cooks prepare food in full view of the audience.

The show opens with Michael, the sleazy restaurant owner played by Brian Paulette, introducing his new chef, George (Matthew Rapport), to the kitchen staff — two Guatemalan cooks, an East African dish washer and young white waiter/busboy. The cooks, Carlos (Justin Barron) and Miguel (D’Andre McKenzie), often converse in Spanish, although they understand English quite well. Steve (Damron Armstrong), the dishwasher, keeps quiet in the early part of the play. And Jack (J. Will Fritz), the chronically exasperated waiter, can’t find a way to fit into this little multinational group.

We learn that Michael is giving George a chance for renewal after a rough patch. George, by his own account, torpedoed a promising career through drinking and drugging. Now he’s sober but shaky and tries to whip the kitchen staff into shape with a maniacal fervor. But the heart of the play resides in the relationship that evolves between George and Steve, which obviously isn’t the African worker’s real name. Steve asks George to teach him how to cook; in return Steve will guide George to a spiritual place of serenity and acceptance.

It becomes apparent that Steve may have been involved in the Rwandan genocide and the civilian massacres that later took place in the Democratic Republic of Congo. When an immigration investigator (Carla Noack) visits the restaurant in search of a war criminal who may be using an assumed name, Steve becomes the logical suspect.

One can question the credibility of certain plot points, but the actors are so committed that they successfully sell this story. Top honors go to Armstrong, whose performance as Steve is subtle and complex. Steve comes to this little kitchen-world from a philosophical plane occupied by no other character in the play. His direct experience has prompted deep reflection on the morality of war, revenge, guilt and forgiveness. I haven’t seen all of Armstrong’s performances, but I’ve seen quite a few, and this ranks as his finest work.

Rapport’s essentially sweet nature serves him well as a comic actor, but he seems an awkward fit as the tormented George. George is filled with rage, guilt and remorse and Rapport struggles to tap into those dark emotions. Nonetheless, the interplay between Rapport and Armstrong is generally superb. The relationship between George and Steve provides the show’s most absorbing moments.

Barron as Carlos and McKenzie as Miguel are fascinating to watch. Their acting skill is evident, but these guys are actually working — slicing vegetables, frying burgers — for extended periods. The way they go about the work is utterly convincing. Carlos and Miguel tend to view the antics of the other characters with skepticism and the actors manage to convey a work ethic cloaked in cynical humor.

The immigration investigator is really a utilitarian role, but Noack brings poise and professionalism to her relatively brief performance.

Snider was inspired to write this piece by his own experience working in a New York restaurant. So the script feels authentic for the most part. This is a unique play attempting to capture a version of reality we seldom see on stage.