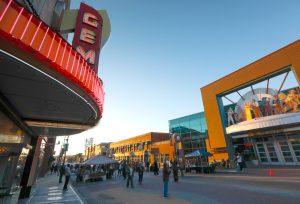 First Fridays are a cultural experience of music, art, food, and shopping on every First Friday year round. Shop local artists and a diverse array of food trucks – all here on the Vine. All of the neighbors in the Historic 18th & Vine Jazz District present lively entertainment! Stop in to the American Jazz Museum and Negro Leagues Baseball Museum, check out live music at the Juke House, Blue Room, Mutual Musicians Foundation, and Vine Street Studio, and dance at Kansas City Friends of Alvin Ailey or our own Steppin’ on the Vine. In the Spring, Summer, and Fall, enjoy First Fridays between Vine and Woodland with outdoor jazz, blues, and neo-soul. by In January, First Friday moves into the Gem Theater and the Lincoln Building at 18th & Vine to keep First Fridays hot even if the weather is cool.

Shane Lutzk studied with, and was mentored by Professor Russell Ferguson at the Kansas City Art Institute. Through their study and discussion on artistic philosophies, Russell and Shane discovered a genuine creative connection. Russell and Shane also discovered a personal level connection through Shane’s cousin, Ted Seligson. Ted was best friend’s with Russell’s father, Ken Ferguson.

The Ferguson-Lutzk collaboration further developed when Shane entered graduate school at Arizona State University. Shane’s ceramic work incorporated influences of Arizona’s extraordinary landscapes. Russell and Shane discovered as a team, how Russell’s artistic expressions through his intricate drawings, integrated with Shane’s ceramic vessels, into unified artistic messages that are powerful. This collaboration expresses the narrative between the landscape and figures, and needs to be shared. The forms Russell and Shane created are featured by sitting on uniquely designed wooden structures, further expressing their messages.

Russell and Shane enjoy their close friendship, and creating this unique collaboration to communicate their artistic philosophies, has been a fantastic experience.

The KCAI Crossroads Gallery: Center for Contemporary Practice is pleased to present Red Dirt Rug by Rena Detrixhe. This ephemeral, site-specific installation invokes the inherent stories within Oklahoma soil, repetitive processes, and found ubiquitous forms. Born in Kansas, Detrixhe received her BFA at the University of Kansas. Since then her work has been presented in numerous solo and group exhibitions. Detrixhe participated in the Charlotte Street Foundation Studio Resi­dency Program in Kansas City and is a current fellow at the Tulsa Artist Fellowship in Tulsa, Oklahoma. “This rich red earth is the land of the Dust Bowl, the end of the Trail of Tears, land runs and pipelines, deep fault lines and hydraulic Fracturing. There is immense beauty and pride in this place and also profound sorrow. The refining and sifting of the soil and the imprinting of the pattern is a meditation on this past, a gesture of sensitivity, and the desire for understanding.”

Dale Eldred joined KCAI in 1959 exerting his influence until his untimely death in 1993. This selection of works by acclaimed sculptor and former chair of the KCAI sculpture department display the process and personality of his monumental landscape projects. Eldred’s material, environmental ambition included phenomena in clay, steel, wood, water and light in various landscapes and urban-scapes. “To be a sculptor means I occupy all the spaces between an architect, a paint­ er, fabricator, agronomist, contractor, nurseryman, and environmentalist … “

Explore craftism and casual conversation by checking out a set of handmade dishes in a woven backpack and documenting your experience. 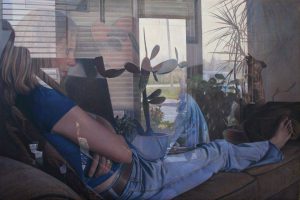 Yeqiang Wang was born in Sichuan China in 1965. He earned his BFA degree at Sichuan Institute of Fine Arts in China in 1991 and taught watercolor at the same institute for seven years. While in China he was known for painting cornfields. In 1998 he moved to Canada and earned his MFA degree at the University of Windsor in 2000. He has focused on painting “Reflection” series since 2001, using glass window as metaphor and figures as the subject to suggest his perception of Western culture as a diaspora. Recently he has been focusing on a new series of photography and painting project called “Return to Classicism”, using masterpieces as inspiration from the 15th-19th century in Europe. His paintings have been involved in a lot of exhibitions in China, Canada and the States and won numerous awards. Awards include Bronze Award in the 3rd and 4th Chinese National Watercolor and Gouache Competition in 1995 and 1998, Bronze Award in the 7th Chinese Watercolor Competition in 1997, Third Place in the Eighth National Juried Art Exhibition in Liberal, Kansas in 2005, Award of Excellence in the Northern National Art Competition in Wisconsin in 2006, Anita Bengtson Memorial Cash Award in Kansas Watercolor Society Great 8 Exhibition in 2006, Best of Show in 2016 National Juried Exhibition at Buchanan Center for the Arts in Illinois, First Place in Texas National 2017 at Stephen F. Austin State University in Nacogdoches Texas and Best of Show in the National Juried Exhibition in Overland Park Kansas in 2017. He is now an Associate Professor of Painting at Washburn University in Topeka Kansas. 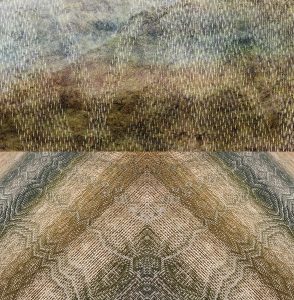 “SANCTUARIES is a series of works that explore concepts of refuge: constructed and naturally occurring via the lands and spaces we inhabit and create for ourselves, rituals, and the resonate narratives that articulate our experience of being. Through sound, weavings, and print, sisters and KCAI alumni Kristine Barrett and Debbie Barrett-Jones create work that seeks deeply, navigating the intersections of darkness and illumination, ancient traditions and contemporary technologies, and personal and inherited narratives.”

Emily Nickel is a ceramic sculptor from Saint Louis, Missouri. She has exhibited her sculpture throughout the US, from Baltimore to Montana to Las Vegas. She is passionate about art’s power to impact the community, and has taught classes and led service learning projects for nine years across the US. She was a 2016 artist in residence at Watershed Center for the Ceramic Arts in Maine, and presented a panel at the 2016 NCECA conference in Kansas City. She recently traveled to Japan to study photography.

Also opening at Leedy-Voulkos on Friday… 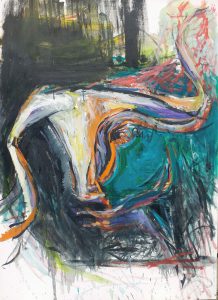 Troy Swangstu is a local artist currently based out of Paola, KS. Originally from Bettendorf, IA, Troy received formal training in painting at the Kansas City Art Institute. Shortly after, he continued to gain relevant experience exhibiting with other professional artists and by working closely with the Nelson-Atkins Museum of Art. In the years since, he continues to gain recognition as a prolific exhibitor at local and regional galleries. As well as his career as an artist, Swangstu has since relocated to Paola, KS to embrace a rural life of grazing cattle. Drawing upon his passion for regenerative farming practices, Swangstu employs the imagery of his daily life, his livestock and the surrounding landscape, as the primary visual subject of these paintings. Each painting created exclusively for this exhibition features abstracted grazing animals; most notably, bulls, rams, and antelopes.

When viewed collectively, the individual characteristics of each painting exudes from within their compositions. Some of the paintings dance across the massive landscape of canvas in brilliant hues of red and yellow; while others remain static, but no less active, in somber tones of monochromatic blue and grey. The quick, frenetic application of paint is done in loose blocks of colors that are juxtaposed against highly gestural strokes. These strokes create movement that trace the forms of the abstracted and segmented beasts. Imbued with a sense of freedom, these creatures are figural representations of the artist’s present state of mind. By painting with such vigor and abandon, Swangstu is emphasizing his newly discovered freedom as an artist. Lest one begins to view Swangstu’s paintings as pastoral archetypes, these works are not intended to be a direct reference to livestock, nor is that the artist’s central narrative. Instead, the subject matter is meant to reflect and incorporate the years Swangstu has spent working with cattle. The hidden subject, as it were, is the paint and canvas. The canvas serves as the vehicle for the artist’s intensive search for true authenticity, while the gestural strokes of paint emphasize his search for a new perspective. In this process of pursuing his own artistic individuality, Swangstu has successfully blended his training as an artist with his passion for sustainable farming.

M-AAA is pleased to present work by regional artist Chiyoko Myose, opening for First Friday September 1 from 6:00–8:00 p.m. at 2018 Baltimore in Kansas City’s Crossroads Arts District. Myose is featuring a collection of work from two of her painting series: Sojourning and Iridescence.

Using a common element of threads, the paintings and installations in this exhibition explore various perspectives into a search for meaning within the sojourner’s journey. Two of the installations, A Thread X A Thread and Gift, explore the sojourner’s relationships with people from different aspects with the material of threads. They are inspired by the fact that the threads are serving as a connecting agent in these pieces; and also the verbs related to thread, such as to tie knots, to cut, and to get tangled, are used idiomatically to express the condition of relationships in the Japanese language.

Visit M-AAA at 2018 Baltimore to see this work, and even participate in placing a piece of thread as an expression of treasuring the moment of meeting people. The exhibition will be on view for First Friday on September 1. Gallery hours are 6:00–8:00 p.m., with other public viewings by appointment only through September 21. 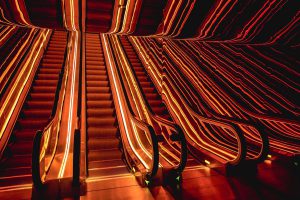 Come together for the art and people, stay for the live music and experiences! You are invited! Let’s meet in a new gallery, photography studio and performance space for something different!

MILOCA, transcendental music from all genres and eras! 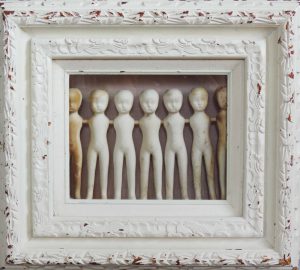 We are proud to announce our third featured veritable artist, Linda Sackin. Linda’s dedicated practice allowed us to choose a variety of work, ranging from works on paper to large sculpture. Her work always emotes a nostalgic tone luring the viewer to a space wholly created by Linda. In her drawings we discovered this quote, that perfectly sums up her work and her practice; “…a person creates their own world, a universe a part, to withdraw to when one gets tired and wishes to get away from the chaos into a simpler world…” – Samuel Beckett

The classic musical fantasy gets the Spinning Tree-tment. The score, “one of the most enduringly delicious ever concocted for an American musical” (New York Times), includes “Old Devil Moon,” “How are things in Glocca Morra” and “Look to the Rainbow.”