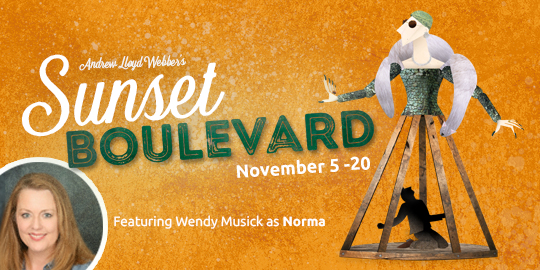 Sunset Boulevard weaves a magnificent tale of faded glory and unfulfilled ambition. Norma Desmond longs for a return to the big screen, having been discarded by tinsel town with the advent of ‘talkies.’  Her glamour has faded in all but her mind. When she meets struggling Hollywood screen-writer Joe Gillis in dramatic circumstances, their subsequent passionate and volatile relationship leads to an unforeseen and tragic conclusion.

The role of Norma continues that dramaturgical lineage of strong women. Norma Desmond is a woman comfortable in commanding men, and exerting her will power to entrap them in her fantasy that the world still idolizes her, even though she vanished from Hollywood twenty years earlier with the arrival of talking pictures.  We chat with Wendy Musick, the brave actress conquering this empowering role in the upcoming production of Sunset Boulevard at The White Theatre.

Wendy, what was it that made you want to take on the role of Norma Desmond?

Taking on the role of Norma Desmond in Sunset Boulevard is quite a daunting task.  Ultimately the lure of the beautiful musical themes throughout the Tony Award winning score, the opportunity to work with many familiar faces and the chance to explore a character who Gloria Swanson portrayed in such glorious fashion in the original movie was just too much to pass up.

How do you approach those signature numbers (“With One Look” and “As If We Never Said Goodbye”) and iconic quotable lines (“Alright Mr. DeMille.  I’m ready for my close up.”)?

I began my approach to those signature moments in the show with researching others who have performed the role before me.  The first thing that I noticed was that they all brought something very different to the character. Then, I focused on Norma and her mindset during those moments.  For her, life was a silent film.  Every emotion and thought were expressed only with her face.   So, I think it’s essential that you not only hear the words, but you see them in her expression as well.  Beyond all that, I place my trust in the director and know that he saw something in me that he wants to be brought to the character.

What was the biggest challenge Norma Desmond presents as a character? Did you watch the film?

When you are attempting to step into a role that has been played, by Gloria Swanson, Patti LuPone, Glenn Close and Betty Buckley it can get pretty intimidating, pretty quickly.  For me, the most challenging aspect has been to think and react in a way that is completely opposite of my own personality.  Norma is unable to see things from anyone else’s perspective.  She has little regard or recognition for anyone else’s thoughts or feelings.  In my own life, I attempt to be a person who puts others before myself, so being a diva has been both challenging and fun!

I have absolutely watched the original film.  For this show, I think it is essential.  I’ve also been trying to research and understand silent films and their stars.

How do you identify with Norma?

Norma and I are very different.  However, I think that Norma desperately wants to be loved, which is something that I think everyone can identify with.  Unfortunately, her inability to understand reality makes it impossible to know what love really is.

What is it about Sunset Boulevard that audiences should not miss?

Audiences will not want to miss Sunset Boulevard for many reasons.  It’s a Tony award-winning musical by Andrew Lloyd Webber based on Billy Wilder’s award-winning Hollywood classic film. Combine that with fascinating set design, the stunning costumes, and an absolutely wonderful cast and crew, and I think you have the makings of a great night out on the town.