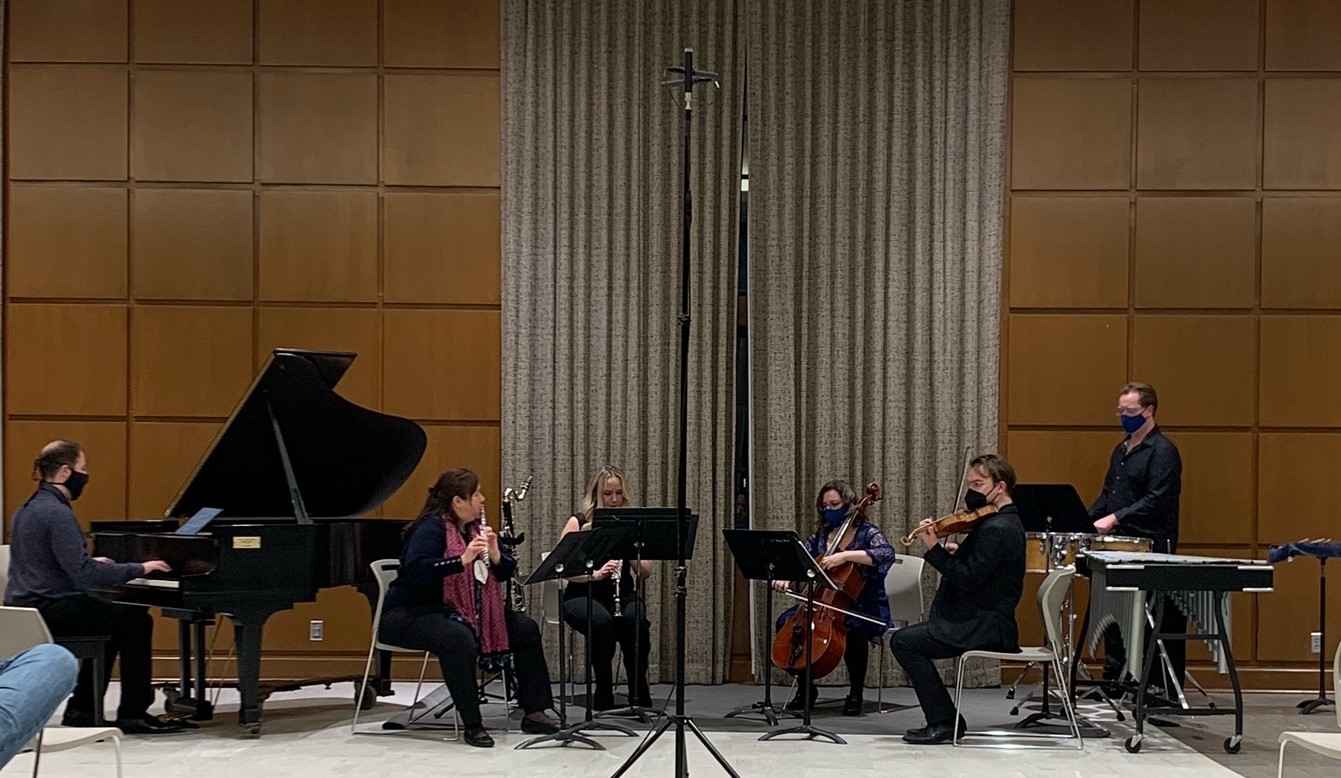 “Tell me where you’re from” can be a loaded question. You can list a series of residences, but the question really asks “what made you you?” Rather than a demand, the query is more often than not an opportunity to newly know someone.

This point of connection, this getting-to-know, linked the works for newEar Contemporary Chamber Ensemble’s third presentation of the season, in the Parish Hall of St. Paul’s Episcopal Church on Saturday night.

This 29th season, in the return to in-person performances, has the overarching theme of catharsis, of connection and transformation, moving from the dark stage of the 2020/21 season into the hoped for possibilities of 2022.

Though these pieces focus primarily on origins and identities, the pieces themselves displayed fractured, disjunct elements, sections pieced (or melded) together, in the same way, perhaps, that our foundational environments–family backgrounds, homelife, childhood–combat with subsequent experiences as we define and redefine who we are, in ourselves, beyond those boundaries.

Christopher Cerrone’s “New Addresses” was written and premiered in 2020, during the height of the pandemic. It’s a driving, pulsating work for flute (Christina Webster excelled in a punishing part), bass clarinet (Sharra Wagner), violin (Zsolt Eder) and cello (Sascha Groschang). The persistent rhythms, harsh timbres, and nether-reaching range created a creeping sort of dread, which contrasted weirdly to the academic stillness of the audience.

“American Haiku,” by cellist/composer Paul Wiancko, best demonstrated this concept of identity as holistic (you are all of what make you you) as opposed to division (part this, part that). Pulling inspiration from both Appalachia and Asia, as well as years of experimental performance, the piece navigates from familiar to far reaching to dreamlike: broad unison strokes, a striking rhythmic pattern slapped on the cello, or a tuneful, fiddly melody. The audience responded warmly to the excellent performance, with Groschang on cello and Boris Vayner on viola.

Echolocation is the phenomenon of orienting yourself by listening to sounds as they bounce off the surroundings and back to you. For Aleksandra Vrebalov’s indeterminate work, “Echolocations,” groups of musicians (a string group, wind group, and percussion/piano/guitar group) were set up in three locations of the hall to produce a “surround sound” experience, (though the left half of the audience had a lopsided semi-surround, at least until the volume and reverberations filled in the gap).

While the sweep of sound and interplay of musicians was of interest, and somewhat meditative, there is a predilection, or perhaps habit, to create an arc: build, peak, peter out. In this case, I would have much preferred the tangle of mid-work chaos to suddenly cut out, leaving echoes ringing and the audience suddenly thrown off guard. In the notes and presentation, more time was spent explaining indeterminacy–a concept that’s been in western classical art music around 70 years or so–than in explaining how this piece pertained to Vrebalov’s identity.

Allison Loggins-Hull’s work “The Pattern” is at turns hostile and somber, representing some of the outrageous antagonism Black Americans have endured in this country. In aggressive passages string and winds sounded like hordes of vindictive mosquitoes, inescapable, with equally aggressive interruptions; the winds shriek and percussion rumbles; the piano’s ostinato became trodding, oppressive, the strings in searing, persevering lines. In the center was a lovely flute line, yet even that was undercut by apprehension.

Lastly, newEar presented Ben Stevenson’s “Lore,” one of the winners of their 2020-2021 Composition Contest. The piece, for Pierrot ensemble, is “a soundtrack to an untold story,” said newEar artistic director Scott Steele.

If so, it seemed a somewhat macabre story. This is what it brought to mind: the soft string opening like wind across the plains, the piano the thrum of an incoming storm, the winds like twining vine (around what? a wooden post? an old gravestone?). The piece progressed, the music portraying loss, conflict, then, in the way a sudden fright leaves a residue, a sort of low grade tremor. Primarily, the work gave a feeling of apprehensive calm…nothing wrong right now, but surely not for long.

In a way, that feeling of apprehension floods all of the concerts of the season, newEar or otherwise. We’re glad to be experiencing music together, but hesitantly, realizing that this is an era that will shape and transform us, a splice in our evolving identities, individual and collective.