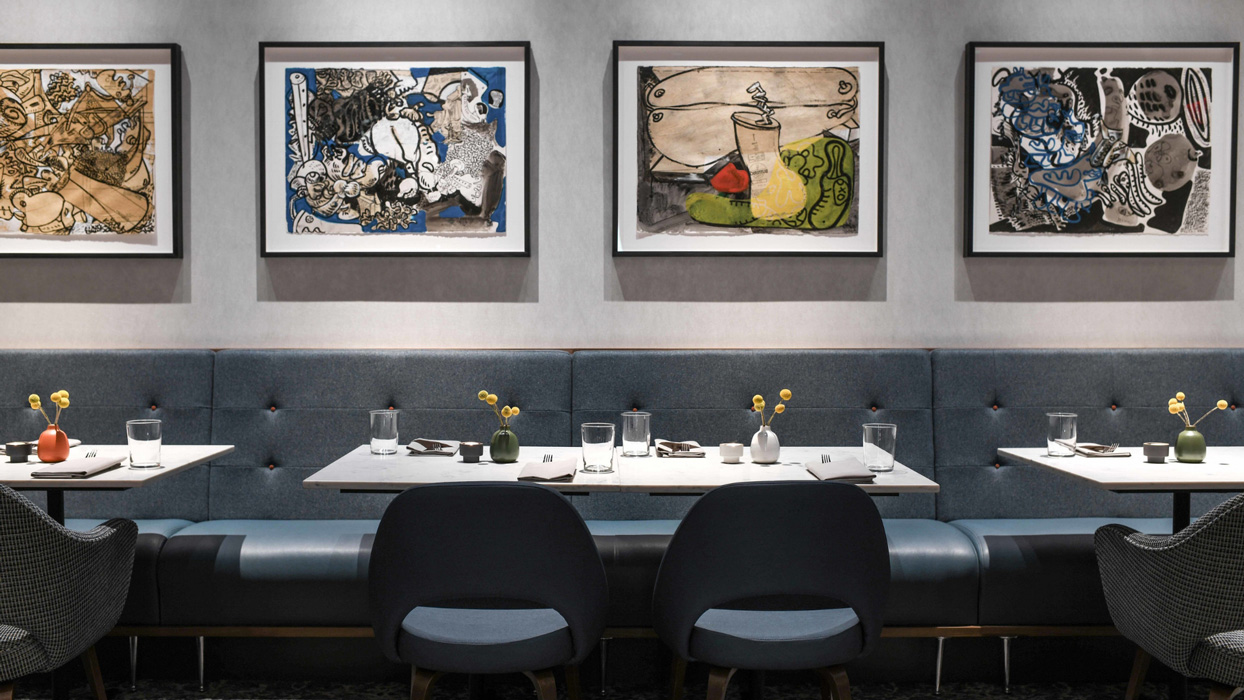 For a one-two culture punch, The Restaurant at 1900 offers performance space as well as fine dining with the luxurious convenience of having both in the same building. Built in 1967 for Lee Jeans and with a distinctive modernist design, this intimate restaurant marries Steve Karbank’s passion for music with the desire to share a great meal following a performance. The hall beneath the restaurant holds about 200, with another, cozier hall nearby. Karbank owns the restaurant with his three siblings, and it’s truly a family affair. The funky salt and pepper shakers lining the walls were taken from late mother Rose’s vast collection. Award-winning chef Linda Duerr’s inventive menu is fresh, seasonal and peppered with savory surprises. (Lobster pop tart, anyone?) Local wine celeb Doug Frost mans the extensive list of vino, and soft drinks are made in-house. Best to check the specials before ordering, but you can’t go wrong with the crispy sea bass and crab salad or the veal scallopini.

If you’ve got tickets for a Friday or Saturday night performance, you’ll find Chez Elle Creperie and Coffeehouse open in the converted Summit theater building, making it a perfect spot to dash in for sustenance. The lobster bisque is rich and creamy, but also check out the soup special. Savory crepe selections include caramelized green apple with fig compote and brie (yum), and chicken with pepper jack cheese and red pepper sauce. The Nutella and banana crepe is the perfect sweet to split before you split, and will have you dreaming of the Left Bank. Up the street at the Westside Local, where you have thoughtfully made a reservation, start with the Green Dirt Crostini Trio (they’re not kidding when they say “local” — this cheese is the real deal) and try not to hog the chili garlic bacon jam. Add salmon to the Westside mac & cheese or go for the sausage & mushroom penne — make it vegan by subbing more veggies for the sausage. Or check out the original La Bodega on Southwest Boulevard for a culinary trip through Spain. Share a few tapas: meatballs in a spicy cream sauce, beef tenderloin crusted with Spanish blue cheese, or rosemary-scented white bean puree and roasted red peppers.

With downtown as your destination, The Savoy at 21c checks the boxes for both art and good food. Restored and reimagined, this historic spot served Harry Truman and Theodore Roosevelt in its heyday and now has a dynamic new energy. Revolving exhibitions in adjacent galleries are perfect to wander through with a cocktail; in the dining room, executive chef Joe West plates up American classic cuisine with a fresh twist, like escargot tortellini and Alaskan halibut cheeks. If the Power & Light District is your destination, the revamped and renamed Bristol Seafood + Steak + Social is a must try. The cocktail menu features punch bowls that are perfect when you’re with the gang; try the sparkling blackberry — it’s delicious as well as Insta-worthy. The 48-hour clarified milk punch is a delight, adapted from a 150-year-old recipe. The three-course, prix fixe menu is new and perfect when you’re on a tight timeline, but the heirloom tomato salad with fresh mozzarella and basil ice cream is a stellar starter. Social hour runs till 6:30, so if noshing is your jam, get the crispy chile cauliflower and grilled artichoke dip for a satisfying meal, supplemented with a few oysters on the half shell for a buck each.

Planning ahead and making a reservation is the right move at Voltaire in the West Bottoms, a cozy place with a hopping bar. The Pomme Pomme is a refreshing concoction combining Lillet Blanc with apple brandy. There’s a respectable pakora, or try the wild striped bass with roasted sunchoke. If your carnivore is showing, the recently refurbished Golden Ox is a charming step back in time. The dry-aged KC strip and the fork-tender Haw filet are juicy and rich. Go classic and get the fluffy baked potato and grilled asparagus. If you’re feeling funky, head over to The Ship and wander through the maze of rooms to get a good seat and a meal that’s better than you’d expect. The Ship opened between Oak and Locust just after the repeal of Prohibition in 1935 and was the chi-chi place of that era; it was relocated to the West Bottoms when Ilus Davis Park edged it out, reopening in 2014. Wines run the gamut from house white to house red; as the menu says, you didn’t really come here for the wine, did you? Be sure to check the specials, but the Cubano is mighty satisfying. And breakfast is served all day at The Ship, so pancakes are an unexpected option.

The River Market teems with dining choices. At boozy bookstore Our Daily Nada, libations languish with literature, so check out the best sellers while sipping craft cocktails like Sal Paradise, a heady blend of tequila and blood orange liqueur. Dinner pickings are light; think quinoa salad and avocado toast. But Tribe Street Kitchen, a few doors down, has the goods. Founded by a world traveler who longed to see his favorite global street foods on one menu, the international offerings include crispy cauliflower (India — and addictive), beef short ribs (South Korea), shrimp tacos (Thailand), and for the less adventurous, a burger with white cheddar and pickles (USA, of course). All dishes are shareable, so go with someone you like. With advance planning, snag a reservation at Brown & Loe on the iconic street corner (with the River Market sign) that once housed a Chinese market. The cornmeal trout with creamed sweet corn is divine, and the outdoor patio encourages lingering over coffee, so keep an eye on the time. But if you opt for Harry’s Country Club, know what you want to drink beforehand. You have a show to get to, and the liquor selection is robust. The fish tacos are a good choice; others say the steakburger is the best in town. And it’s easily split, leaving you the option to start your meal with fried green tomatoes and pimento cheese. Win win.

There are lots of choices in the Crossroads, but let’s imagine it’s a Friday night after an uber-stressful work week. What sounds better than sinking your tired bones into one of the chic couches at the XR Café in the lobby of the new Crossroads Hotel? You’ll revive as soon as there’s a glass of Prosecco in front of you. Get a smoked trout dip to share, and put your order in for a crispy pizza, served sizzling hot from the wood-fired grill in the corner. Or enjoy a killer view of downtown Kansas City at Percheron, the hotel’s rooftop bar, along with Lamb Merguez and a tomato cucumber salad on the side. Depending on when your show starts, the spectacular sunset will be a fitting prelude. Across the street at The Jacobson, flask service is available (imbibe freely only if your week has been impossible). The Hemingway is bourbon, lemon cordial and muddled orange, and the large flask serves four cocktails, which easily erase lingering work anxiety. The espresso-rubbed pork confit will make your world right again. And don’t forget the old faithfuls in the Freight House District; a crispy schnitzel at Grünauer or a creamy carbonara at Lidia’s are never wrong choices.

If you’re headed to the Southmoreland neighborhood for a performance, there are some excellent culinary choices nearby, especially if you’ve planned ahead. It’s not difficult to snag an early dinner reservation at Rye on the Country Club Plaza, and you’ll be greeted by a chill vibe that encourages ordering a fruity rosé sangria or a Jade Mule with lime-thyme vodka while you peruse the menu. The hanger steak and roasted quail are solid choices, but it’s hard to pass up Chef Colby Garrelts’ shatteringly crisp fried chicken with homemade pickles and ham gravy. Try to squeeze in a slice of Megan’s luscious banana cream pie before curtain. If last-minute phone calls kept you late at the office (no judgment — we’ve all been there), zip into Made in KC Marketplace and grab a meatball sub at the hyper-local Bay Boy Sandwich stand inside the door. Pop over to the bar in back for a local craft beer to wash it down. For a quick but unique bite, try Stock Hill, located in the former Kansas City Board of Trade building south of the Plaza. Pair a dirty martini with a short rib and BLT slider duo. Enough to fill you up but not so much you’ll be snoring by the end of the first act.

If you’re convinced the most exciting cooking in America is happening somewhere else, you owe it to yourself to head to The Antler Room in the Tower East neighborhood. The accolades are impressive: “Bon Appétit” magazine named it one of the best new restaurants in 2017. “Food & Wine” included it on a list of the 15 most important natural wine bars in the country. And executive chef Nick Goellner was nominated for a prestigious James Beard Award in 2019. Get there early enough to savor a sparkling wine spiked with pear brandy. Then dig into some small plates. Charred broccoli with kimchi dressing. Burrata tortellini. Ramp spaghetti with caramelized scallop butter. Take your dessert box of strawberry marshmallows, orange shortbread cookies and Russian teacakes to go. Because, you know, curtain time. Perhaps you didn’t think ahead and have no reservation. No worries, we’ve got you. Try Brewer’s Kitchen, a new hangout at 31st and Gillham Road. Owner Chris Riggins is from Des Moines but now calls Kansas City home. Barn planks cover the walls and the reclaimed light fixtures give the place a homey, rustic feel. The burger-heavy menu also offers salads and appetizers, with local craft brews to wash everything down.

For a big night planned in the Jazz District at 18th & Vine, Soirée Steak & Oyster House New Orleans Bistro sets the mood nicely. This African American-owned soul food restaurant offers traditional flavors of the Deep South with contemporary flair. Chef Anita Moore combines her love of Cajun and southern comfort food in realizing her long-held dream of opening her own restaurant, first in Smithville and now at 18th & Vine, and filling it with the mouthwatering aromas that make it feel like home. Set the stage with fried green tomatoes and seafood ravioli. The gumbo is authentic and hearty enough to make a meal, but the charbroiled oysters might be calling you, and they’re just two bucks each. The pecan-crusted trout or the Creole chicken and shrimp offer deep flavor, but this is a steak house, so you are totally within your rights to get the Jazz District Strip. Added bonus? You are just steps away from your show. Or make a reservation at Novel in the East Crossroads. Chef Ryan Brazeal previously operated the restaurant in a century-old house on the Westside and re-opened in this sleek new home on McGee Street with polished concrete floors and a semi-open kitchen. The menu is uber seasonal but still has the crispy egg so many customers crave.