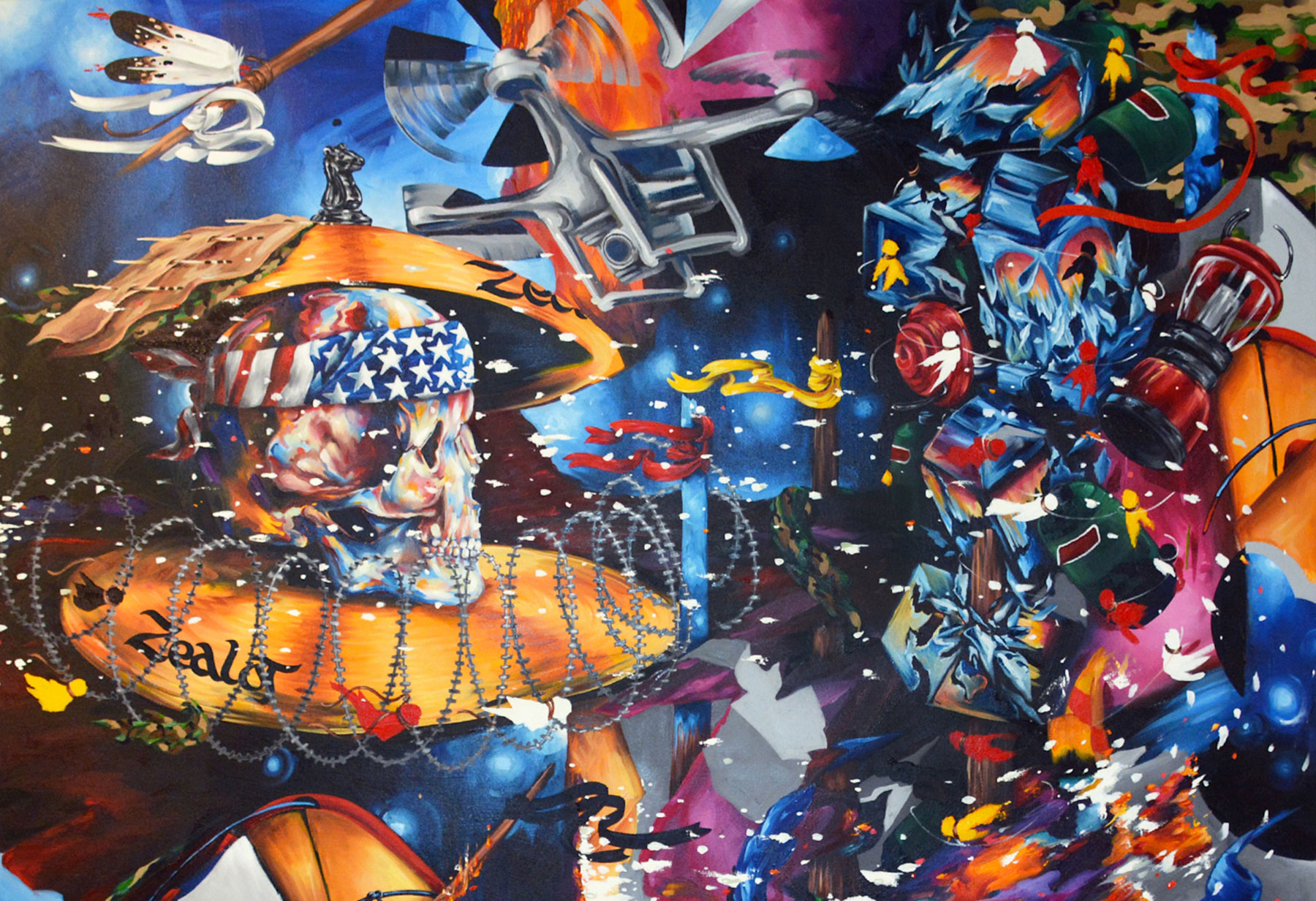 Travois First Fridays, featuring exhibits by North American Indigenous artists selected by a panel of art experts and American Indian artists, continues this season with a full roster of talent.

Opening Nov. 1 is “Playing with Fire,” an exhibit by Osage, Creek and Cherokee artist Yatika Starr Fields. Fields, a painter and muralist who trained at the Art Institute of Boston, is now based in Tulsa, where he received a Tulsa Artist Fellowship in 2017. His work was featured in the acclaimed 2018-19 exhibition, “Art for a New Understanding: Native Voices 1950s to Today,” at the Crystal Bridges Museum of American Art.

Fields draws from nature, urban experiences (he has lived in New York City and Seattle) and the traditions of his people in works that have moved from abstraction to his own unique brand of representation incorporating vivid colors and swirling motion that encourage viewers to draw closer and consider his message.

“In the past few years it’s become more evident in my eyes, that global political actions are increasingly on the rise,” the artist has said. “Land, water, mineral, housing and many more obtrusions are taking away human rights as well as human dignity and acknowledgment.”

Fields’ Travois exhibit will include “America Realized,” a tangled mélange of broken and shredded objects and forms alluding to militarism, climate change, surveillance, incarceration and survival. A skull wearing an American flag headband surveys the destruction through a looping coil of barbed wire under a hovering drone. A shallow depth of field causes the brightly colored images to press up against the picture plane, heightening the sense of urgency.

The painting’s imagery includes colorful tents, which have served the artist as a potent metaphor since his 2017 “Tent Metaphor, Standing Rock” series, inspired by his participation in the Dakota Access Pipeline protests.

He explains, “From refugee camps, land occupation from pipelines to homeless encampments, tents have transcended the weekend leisure usage to a symbol of hope and economical degeneration — survival is first, fight to survive and bring change for the future.”

Activism meets optimism in Fields’ work, which he describes as a “search for freedom.”

Above: “America Realized” (2017) (detail), a six by six-foot oil on canvas painting by Osage, Creek and Cherokee artist Yatika Starr Fields, will be part of his exhibit, “Playing with Fire,” opening Nov. 1 at Travois.