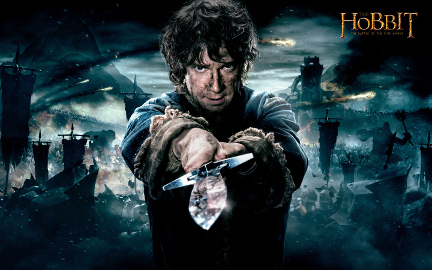 To say that I am a huge fan of Peter Jackson’s oversized homage to J.R.R. Tolkien’s classic books is by far an understatement. While I have never been a fan of the original books, the Lord of the Rings Trilogy and now The Hobbit Trilogy have been magnificent undertakings that are, in my opinion, some of the most quality movie going experiences audiences have received over the past few years.

However, in comparing the two trilogies against one another, The Lord of the Rings wins out whole heartedly. In terms of characters, development and wonder, The Hobbit films have just seemed lacking. Not because the actors and actresses have not delivered on their marks and not because the director has not given it his all. In my opinion, it’s all about relevance.

Just looking at the current hashtag attached to the final movies trailers – #OneMoreTime – it’s clear that audiences may just be over watching a Hobbit walk and walk for three hours. With a source material that is far smaller than any of the its following tomes, The Hobbit films thus far have been full of bloat that clearly has watered down its overall effectiveness in the opinions of critics and even the most die-hard of fans.

Did we learn nothing from The Matrix: Revolutions?

While full of visually appealing moments and fantastic fight choreography, ultimately, this film is nothing more than a building block bridging the gaps between Bilbo getting back to the Shire and then handing the ring off to Frodo.

With little character development for anyone other than Bilbo and Thorin Oakenshield, it’s difficult to find a compelling argument to care anymore. That statement may be over-simplifying it too much as, of course, more characters do experience arcs that add to their overall appeal. However, in essence, more than half the Dwarfs remain background noise and the “armies” that arrive are just fodder for the battle field.

Are there moments of awesomeness? Hell yes there are. How about a Saruman, Elrond and Galadriel battle against the nine Ring Wraiths? Amazing. How about a Legolas all-out acrobatic sword fight on a crumbling tower against an orc boss? Crazy badass! What about Thorin’s all-out fight against his arch enemy and murderer of his father? Tear-dropping drama in all its slow motion beauty.

Full of everything I want but alas everything I’ve already seen, this final installment of The Hobbit Trilogy is nothing near the pageantry that was The Return of the King. Where the first film trilogy expanded the audience’s sense of wonder and the abilities of film storytelling, this film is is just another collection of large expansive landscapes, slow motion close-ups and of course … walking.

Like I stated, I did enjoy this film. However, in terms of its relevance in the grand scheme of its product, I’m not sure if larger audiences should take the time this holiday season to go back #onemoretime.

3 out of 5 armored boars