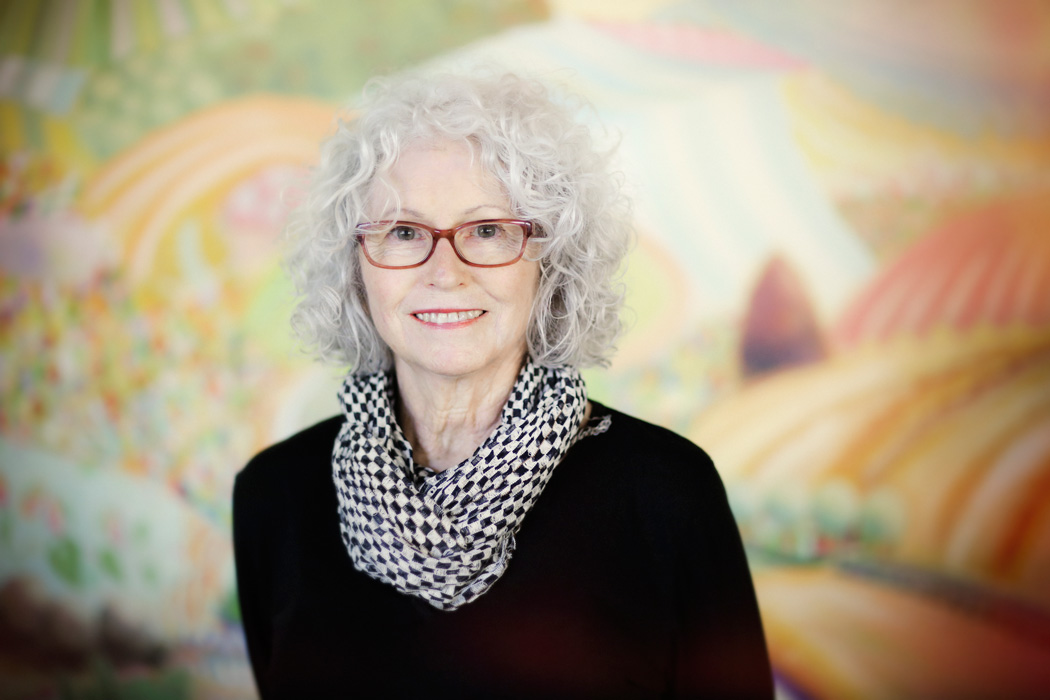 The Kansas City painter’s work is making a move into museums.

Over the past four years, Carol Zastoupil has developed an enthusiastic following for her rhythmic fantasy landscapes. And no wonder. With their bright colors and verdant vistas of undulating natural forms, they seem to hold a promise of peace and happiness.

Sales were brisk from Zastoupil’s exhibit, “New Paintings,” at The Brick in 2012. They continued steadily with her second one-person show, hailed by critic Elisabeth Kirsch as “dreamy, gentle, even seductive,” at the Steeple of Light Gallery in 2014.

Last December the Nerman Museum of Contemporary Art purchased Zastoupil’s Hidden Lake Road from her solo exhibit at Todd Weiner Gallery. The acquisition followed the museum’s earlier purchase of one of her “bonsai” paintings from a June 2015 group show at Main Street Gallery.

“Zastoupil’s landscapes are fantastic and deeply personal,” says Bruce Hartman, the Nerman’s executive director. “They embody her love of nature, and she imbues them with energy, humor, and a sense of internalized motion — as if the scene is transitory or ever-changing. Her highly stylized motifs bespeak a unique vision.”

In winter of 2014 Zastoupil’s work graced the cover and inside pages of New Letters, UMKC’s magazine of writing and art. This summer she is exhibiting at the Albrecht-Kemper Museum of Art in St. Joseph as part of “Re:Generation,” a group show of seven women artist colleagues who share a background as artist-teachers.

Now retired from 17 years of teaching art at Southeast High School, Zastoupil spends as many as 12 hours a day in her Brookside studio. “Creating colors and moving a brush are really satisfying,” she says, and her output is prodigious. Located on an upper floor of Meyer West Condos, the studio is a gallery in itself, with dozens of canvases arrayed on the walls and stacked on the floor.

Until now, Zastoupil has worked at a fairly modest scale — usually 20 by 30 inches and smaller. The works at the Albrecht-Kemper represent a move to a larger format, but without any significant alterations in her ebullient aesthetic.

Often, a sinuous roadway serves as a compositional catalyst. “It makes it easy,” she said, “to get the painting going and build other parts I like.”

A candy-colored palette reinforces the imaginary nature of these scenes. So does Zastoupil’s use of single-point perspective and a high horizon line. “These are pleasurable places,” she says.

“Her utopia is something I can subscribe to,” Weiner said in the aftermath of Zastoupil’s show. “It’s magical.”

All of the landscapes take their titles from street names that Zastoupil notices and records during her travels: Belton Valley, Wonderland Trail, Hidden Lake Road. “I grew up on Valley Ridge in Dallas, Tex.,” she said.

Zastoupil trained as a weaver, earning her Master of Fine Arts at KU in 1971. It was color that captured her imagination. “I looked in the yarn closet at school and seeing all these colorful yarns, I thought, ‘Wow, I want to do that.’”

An invitation to be part of the 1997 “Wild Woman Salon” at Morgan Gallery inspired her to pick up a brush. During a visit to Texas to be with her mother following knee surgery, “I sat down with gouache and started painting,” Zastoupil said.

On her return to Kansas City, she continued to paint and participate in group shows, garnering positive response, sales, and awards. With so much exposure under her belt, Zastoupil brings profile to the Albrecht-Kemper’s “Re:Generation” exhibit. It’s another milestone, marking her first appearance in a museum exhibition.  o

“Re:Generation” continues at the Albrecht-Kemper Museum of Art, 2818 Frederick Ave., St. Joseph, through Sept. 11. Hours are 10 a.m. to 4 p.m. Tuesday-Friday and 1 to 4 p.m. Saturday and Sunday. Admission is $5 for adults, $2 for seniors, $1 for visitors under 18 and students w/valid ID, and free to children six and younger. For more information, 816.233.7003 or www.albrecht-kemper.org. To see more work by Zastoupil, visit www.carolzastoupil.com