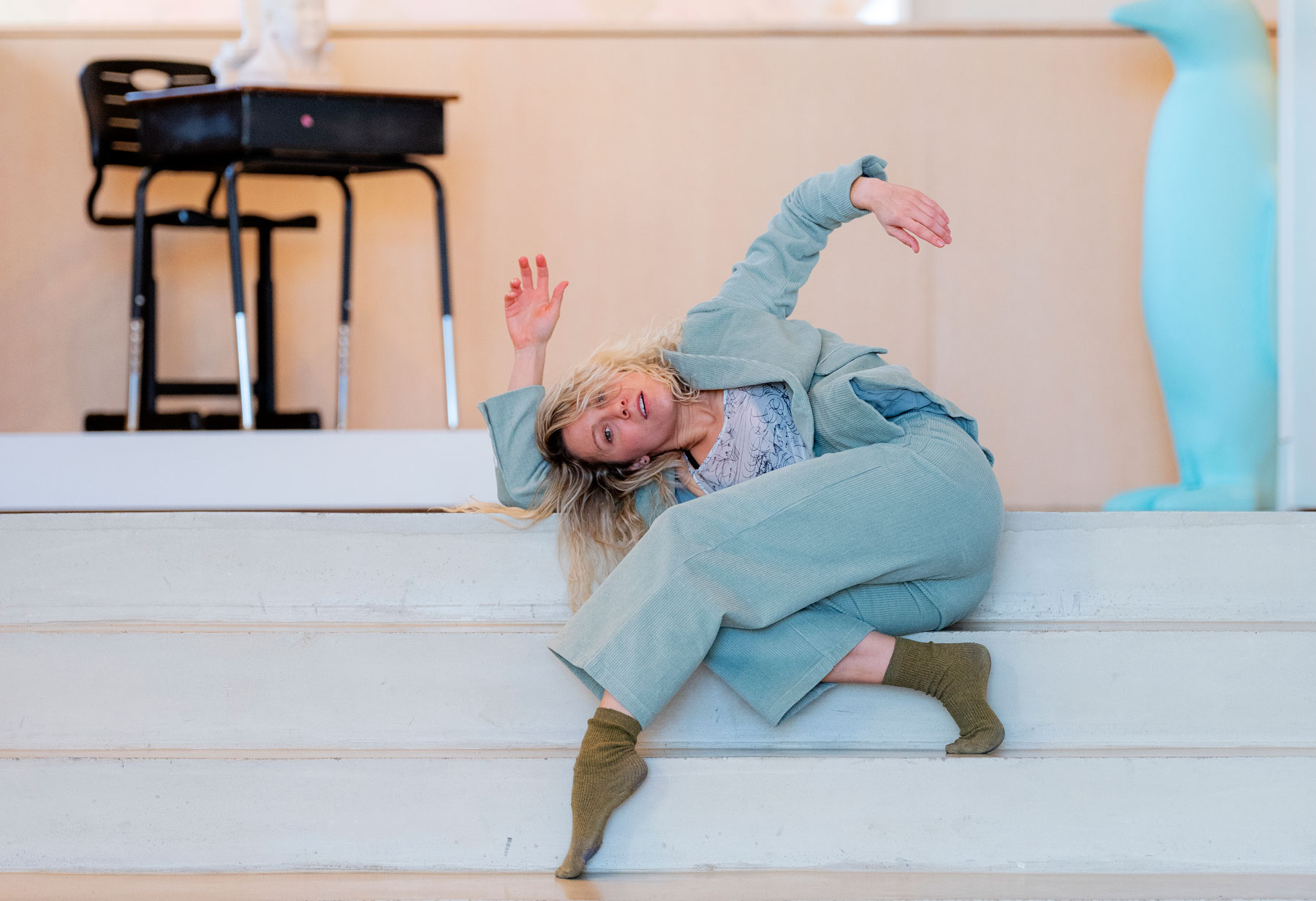 The 2019 Rocket Grant Recipient is Testing the Boundaries of Dance

The hallway is blue lit and packed. There are large blue penguin sculptures in random places. In a bottleneck between two rooms, two hands rise up in the middle of the crush. A woman with flyaway blond hair starts to jiggle from foot to foot, creating more space around her than there was before. As people move just a little bit away from her, she darts into a gap, breaking through.

As a cofounder of RubiX, an artist collective, she is searching for a way to break through some of the strictures of dance, the barriers within and without the genre.

She and her collaborators started RubiX to remove those barriers. Last year, they were awarded a Rocket Grant from the Charlotte Street Foundation and the Spencer Museum of Art in Lawrence, to support that aim. The Rocket Grant program is funded by the Andy Warhol Foundation.

“Artists spend time stuck in their own silos, in their own genre, and then you kind of oscillate, and you don’t really feel like you get anywhere,” Kostas said. “I really want to create more things that challenge tradition and bring a new light to dance in Kansas City.”

Last fall, as part of its foundational year, RubiX held a residency at the 21c Museum Hotel, creating a series of immersive, interactive, mindful, multi-disciplinary performances. They aim to bring performance into the community, to make the audience part of the performance and to show the performers and the work up close. “People can see the grit of the work and the vulnerability of it,” said Kostas.

Kostas, who identifies as Greek American, grew up in Kansas City. She attended the UMKC Conservatory for a time but started getting professional dance opportunities. Her dance career took her coast to coast until a knee injury switched her focus to choreography. She’s been choreographing professionally for the past 10 years, though it’s only in the last few years that Kansas City audiences have had the opportunity to see her work, when she relocated over six years ago.

“I was just planning to be here as a pit stop until the next thing,” she said. But the artistic community had changed: “To see how our city was thriving in a different way . . . it’s really become a hub of artists who just want to come together and make things.”

She still travels for choreography and for training. “Sometimes I’ll be gone for a while, so people forget I live here,” she laughed. “But I do.”

In the past few years, she was adjunct faculty for the UMKC Conservatory dance department, choreographed for City in Motion’s Dance in the Park, the 2018 Fringe Festival and last year’s Kansas City Ballet New Moves showcase, adding to a resume that includes work for television, feature film, and concert work for dance companies across the nation. She is also an instructor and choreographer at the Kansas City Ballet School.

When she’s not dancing, teaching or traveling, Kostas works as a potter at Convivial and spends time with her four rambunctious nephews.

Kostas expanded her knowledge beyond traditional forms of dance. “My focus isn’t just contemporary dance; it’s contemporary movement and breaking out of the lines and conditioning of my classical training. That has been challenging to do in Kansas City but also liberating.”

She’s studied at the London Contemporary Dance School, with Peter Chu (artistic director of Chuthis and guest rehearsal director of the Nederlands Dans Theater), and with the Hofesh Shechter Company. She trained in Gaga, the movement language from Ohad Naharian of Batsheva Dance Co. and with Akram Khan’s summer intensive, traveling from Los Angeles to England and from Italy to New York to hone her craft.

Studying in these different methods helps her develop her own concept of movement and train others to move between different styles.

Kostas also wants to change the way dancers learn to respond to music. “We are taught to do the physicality first, and I’m like, ‘no! you need to listen. You need to let your ears guide your body — not shape the body — and then listen.’ People see that disconnect; they feel that disconnect, even if they are not a dancer.”

“Music isn’t talked about in dance as much as it should be, given how foundational it is to the work we do. I think all dancers would benefit from a stronger background in it . . . we are not just running in parallels.”

Her movement is often interlaced with guided improvisation, and she uses ear-training exercises to prompt the dancers. “People feel like its unfolding in front of them, instead of being so rehearsed and premeditated,” she said.

Kostas also writes about dance, contributing to “DIYdancer Magazine,” “DanceSpirit Magazine” and Dance/USA’s e-journal. For her, writing is another way to explore the craft and share the process for dancers and non-dancers alike. “Writing about dance has helped me speak out about it and open up about the things that go unsaid in our art form,” she said.

Kostas uses social media to allow access to dance, as well, sharing videos of her improvisation in the studio, behind the scenes, and posting passages from what she’s reading as it informs her art making. “I want people to see the work behind the work.”

“I feel like we forget that when we let people inside the process, people get to see themselves in the work more. It’s more relatable,” she said. Find her on Instagram @_haleykostas.

“That’s what I really want to do with dance, get it off the stage and remove that gap between performer and audience member. There’s so much that gets lost between the seat and the stage.”

Her pursuit of knowledge also extends inward. This year, she’s starting a degree in psychology, learning more about how the body affects the mind and vice versa.

There’s more ahead in 2020. The year starts with a patron event at 21c Museum Hotel for RubiX to support their plans and performance opportunities. In the spring, Kostas will travel to Bentonville, Arkansas, to work with the NWA Ballet Theatre, where former Kansas City Ballet dancer Ryan Jolicoeur-Nye is the artistic director. Then, in the fall, she and her partner, Conner Giles (they collaborate frequently, and he’s also a RubiX co-founder), will debut their first self-produced show “IN ALL FORMS,” with his music and her repertoire.

“For such a limitless genre, [dance] really has some strong confines, and I’m trying to figure out a way to break us out of them. We have more than what audiences are seeing, and that’s what I want to share.”

Above: Dancer and choreographer Haley Costas poses with artworks at the 21c Museum Hotel in Kansas City. The painting at top left is “UNAFK” (2016), © Josephine Taylor, courtesy of Catharine Clark Gallery, San Francisco. The sculpture in front of it is “Absorption No. 5” (2015) by Li Hongbo. (photo by Jim Barcus)