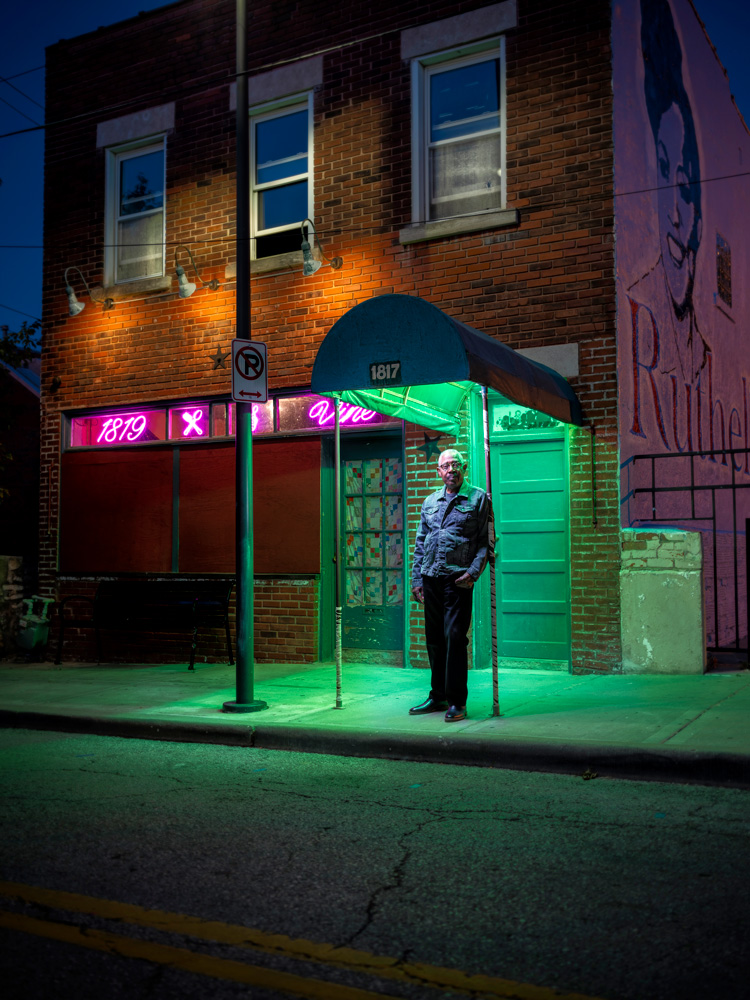 Portrait of filmmaker Rodney Thompson in the 18th & Vine Historic Jazz District,
the focus of two of his best-known films (photo by Jim Barcus)

Race, gender and culture aside, familial relationships are basically the same around the world. People produce children and grandchildren who sometimes embrace values and possess personalities that conflict with their own.

From such cinematic classics as “The Color Purple,” “Fences” and “Boyz N’ The Hood” to recent fare such as the acclaimed series “Queen Sugar” and the films “The Photograph,” “Concrete Cowboy” and “Queen and Slim,” Black filmmakers have utilized cinema to create films that explore these types of interpersonal conflicts within the context of the African American family structure.

With the help of an Artistic Innovations Grant from the Mid-America Arts Alliance, veteran Kansas City filmmaker Rodney Thompson will contribute to this important body of films with his production “The Marble Rebellion,” which, according to the release, “explores the inner workings of interpersonal relationships between adults and children, revealing how supposedly vulnerable youth are able to reverse the dynamics of power and impose their will on an unsuspecting adult.”

The film centers around a 70-year-old Black grandfather and his 7-year-old grandson, who each exhibit a sense of territorialism regarding the shared space where they reside.

In Thompson’s own words, “The film takes the viewer on an intriguing cinematic journey that drives the quirky story with visual machinations, from the characterization of marbles, to disappearing children, to the campy sounds of dialogue from 1950s cowboy TV shows playing in the background, as the unabashedly alpha males engage in a battle for primacy over their home environment.”

With “The Marble Rebellion,” we can expect to see Thompson once again use film to explore the complicated issues of Blackness in America.

Two of Thompson’s previous films focused on Kansas City’s jazz history. His moving 2016 film “18th Street Lives” chronicled the rise and fall of the 18th & Vine Historic Jazz District with sensitivity, exploring the effects of segregation, and then integration, upon the legendary area. Produced with the help of a Missouri Arts Council grant, “18th Street Lives” premiered in the 18th and Vine area before being screened at the Missouri State Museum.

“What we are trying to do is tell a more complete story, and one of the main things we are doing is trying to tell that story through the eyes of the people who experienced 18th Street in that period of time,” Thompson stated at the time.

In 2018, with fellow veteran filmmaker and retired educator Stinson McClendon, Thompson co-produced a rolling documentary about Kansas City’s 12th Street area during the city’s heralded jazz age. Screened at The Nelson-Atkins Museum of Art in 2019, “Remember 12th Street” utilized probing interviews and rare archival footage to transport audiences back to the days of a “wide open” Kansas City.

With “The Marble Rebellion,” we can expect to see Thompson once again use film to explore the complicated issues of Blackness in America. His past work has demonstrated his ability and willingness to address these issues directly while also creating contextual frameworks that prod the viewer toward exploring their own thinking on these issues.

“I am motivated to make films by my personal belief that we need to tell our own stories, and film is the medium that offers the most viable means of storytelling that mimics real life like no other medium can. ‘The Marble Rebellion’ is based on personal experiences I had as a child,” Thompson said.

Based on Thompson’s past work and commitment to his craft, we can confidently expect to experience a film that speaks forcefully, yet tenderly, to our hearts, minds and souls.

Supported by the National Endowment for the Arts and facilitated locally by the Mid-America Arts Alliance, the Artistic Innovations Grant is designed to encourage innovation by providing financial assistance for artists creating new and original works in the Mid-America area. Sixteen grants totaling $226,500 were given for FY22, including three to KC area artists and organizations. Joining Thompson in receiving grants were documentary filmmaker Sav Rogers of Olathe and the InterUrban ArtHouse in Overland Park.