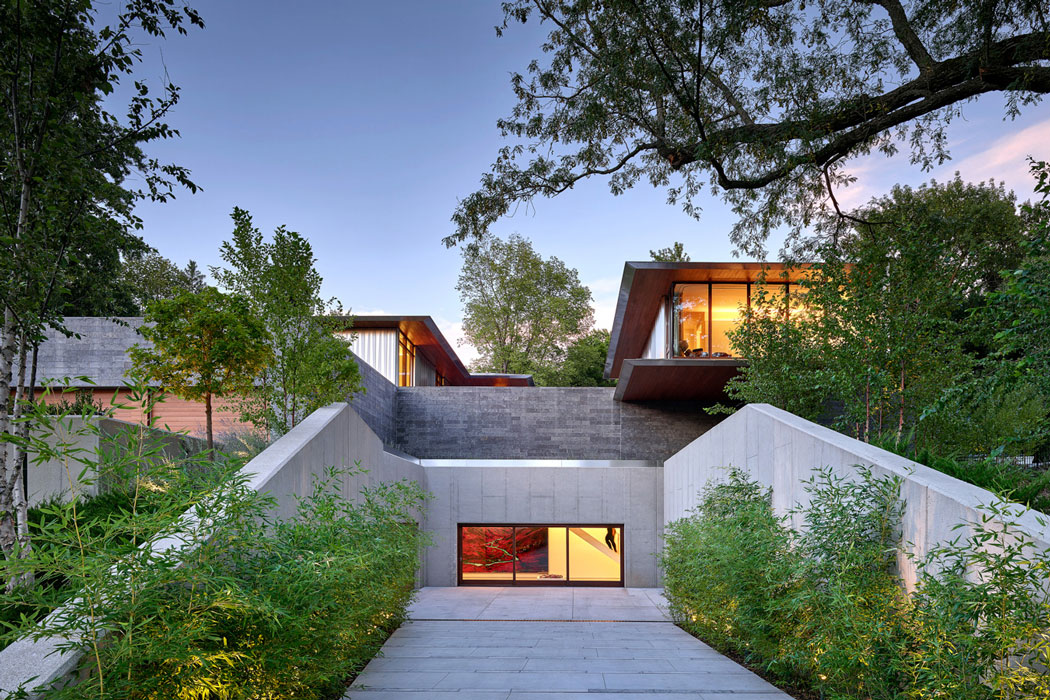 Since launching a boutique architectural practice in Kansas City some 13 years ago, Matthew and Jesse Hufft have become known for putting a decidedly luxe and modernist stamp on the residential and commercial landscape. From one-of-a-kind, sleek mansions to the uncluttered swoops of a Standard Style store, the Hufft firm’s architectural products tend to stand out.

So it might come as a surprise that their design toolbox also contains a deep strain of historic preservation.

When, for example, the 21c Hotel Group remade and reintroduced the venerable Savoy Hotel and Grill downtown as the 21c Museum Hotel, Hufft’s restoration work came into full, glorious view.

From the cleaned-up building exterior to the reborn hotel spaces to the gently cleaned and burnished Savoy bar and lounge, the statement about Hufft’s capacity has been clear. Original tile flooring and tin ceilings, some dating to 1888, some to later additions, emerged in the process. A mothballed interior atrium space has been recovered and imaginatively turned into a fitness room.

“I don’t think people think of us as doing historic renovations,” says Jeff Kloch, the firm’s point person on the 21c project. “But we’ve worked on a few and it’s nice to bring new life to a building.”

Hufft was the project’s executive architect, working in collaboration with Deborah Berke Partners of New York.

“Hufft is a firm of designers with a strong knowledge of building and making,” says Terrence Schroeder, a principal at Berke. “They understand how things come together. That was very useful to us, especially in surveying and salvaging historic elements of the building to integrate with our modern intervention. For example, their attention to detail, commitment and easy local access to the building enabled us to reuse historic porcelain sinks found throughout the property in the new guest bathrooms.”

From its beginnings with a handful of employees, Hufft, formerly known as Hufft Projects, has grown almost exponentially in recent years, branching out not long ago by establishing a second office in Bentonville, Arkansas. With a total staff of about 50, the firm’s growth has come by a combination of concerted ambition and aggressive opportunism, says Matthew Hufft.

Along with architectural design, the firm includes the rare combination of fabrication facilities and construction, taking the design-build concept to a new level.

“Sometimes,” says Jesse Hufft, the firm’s CEO and principal, “Matthew and I look at each other and wonder what happened. It happened so quickly.”

The firm’s earlier years bore the dominating vision of Matthew Hufft, a Springfield, Missouri, native who had worked for architect Stanley Tigerman’s firm in Chicago and for Bernard Tschumi in New York before putting down stakes in Kansas City. An ultra-modern house he designed for his parents in Springfield set a standard of high-end residential verve. That luxury end of the practice reached a peak in Kansas City in 2016 with the completion of the “Artery Residence,” a 10,000-square-foot, glass, stone and wood-lined show house and art gallery just off Ward Parkway.

Nowadays, the firm, while actively branching into institutional and cultural projects, operates collaboratively under the joint direction of nine principals. And its multi-faceted mission — design, build, fabrication — adds unexpected synergies and learning experiences. Five years ago, the firm repurposed a mid-century grocery warehouse at the northern tip of Roanoke Park into a complex that includes rental lofts as well as its airy, art-lined home base, with comfortable space for designers as well as woodworkers and other makers.

So to continue to grow, Bouillette says, “It can’t just be all Matthew’s vision.” But, she adds, “In the same breath, Matthew is a visionary. He’s why we’re here. We don’t sit around and do the same thing over and over. That’s largely driven by his vision.”

Hufft’s beachhead in northwest Arkansas, where six staffers are currently stationed, includes the transformation of a blighted food-processing plant into a culinary campus, part of a master plan to create the Bentonville Market District. The first phase, the 8th Street Market, includes restaurants, retail, food production and education. The firm also has recently finished a project for Bentonville’s largely private municipal airport, Thaden Field, adding public amenities such as a restaurant and aviation exhibits.

Other current and recent projects range from a recreation and wellness center at Auburn University in Alabama, to a beer garden and bowling alley in Topeka, to the Parlor, a food court in Kansas City’s East Crossroads. The Parlor, expected to be a prototype for replication elsewhere, involved turning a brick-walled warehouse into a gathering place amid a medley of chef-driven, pop-up eateries.

Hufft has also become known for its dramatic interiors, creating attractive environments for the likes of the Corvino Supper Club and Tasting Room, The Roasterie, the Baldwin and Standard Style denim shops and the Tuft & Needle mattress stores.

And its fabrication services include making casework for Saks Fifth Avenue stores on both coasts and planters for the 21c hotel in Nashville.

Every project they take on has to be meaningful in some way, Matthew Hufft says. The team spent two years brainstorming ways to build a pre-fab prototype for a custard shop’s franchising plan. That’s certainly meaningful for the future of that business. But also, he says, a fitness center built in Humboldt, Kansas, was meaningful for its community.

Next on Hufft’s plate will be one of its biggest current projects, loaded with meaning — a new academic building for the Kansas City Art Institute. Housing the liberal arts department and student services, it will be one of the few places on campus where every student will pass through and take classes. The building will rise in the coming years on the site of the former Donaldson house on Oak Street. One of the school’s and Hufft’s major challenges will be how the building’s scale — a planned two levels — and design can allay the encroachment fears of the surrounding neighborhood.

“We see it as an opportunity to build community,” says Jesse Hufft, referring to both the campus and its neighborhood outreach. In the midst of a robust period of renovation and building, the Art Institute’s master plan includes the future demolition of the Baty House, the gray-painted but structurally tired landmark near 45th and Oak streets. The new building thus will have an opportunity to make a different kind of statement.

Says Jesse Hufft, “We think this project has the ability to transform the school.”

Hufft’s growth and activity of late follows a focused period a couple of years ago of self-reflection and “re-branding” as its principals looked down the road.

“I call it a bit of growing up,” she says. “Where do we want to go? It’s just been this evolution.”

But mainly the Hufft team has learned to “honor the thing we’ve become: the two-year-old company in 13-year-old clothes.”

ALL IMAGES, COURTESY OF HUFFT