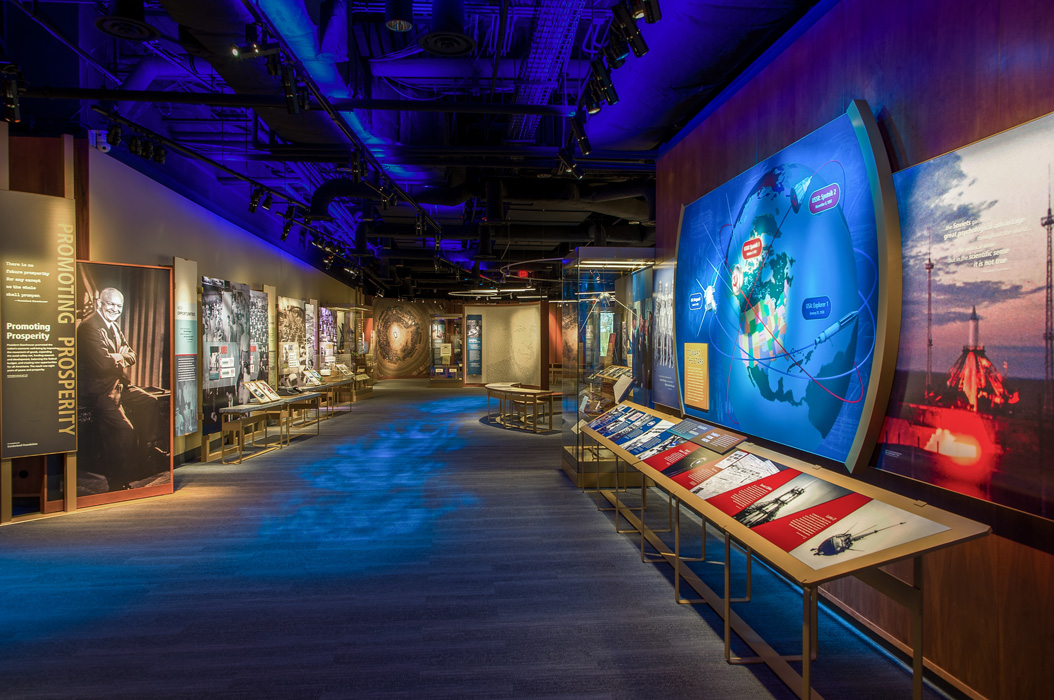 Eisenhower Presidential Library and Museum Reopens with a New Exhibit

After a year closed to the public, the Eisenhower Presidential Library and Museum in Abilene, Kansas, has reopened with a new exhibit.

The first major exhibit redesign since the 1970s offers what museum officials describe as a “new lens” through which to meet Dwight and Mamie Eisenhower, appropriately titled: “Ike and Mamie tell their story.” What the exhibit offers, Library and Museum Director Dawn Hammatt explains, is “a sense of the humanity” of a couple “we needed then, and we need to know now.”

The reopening was originally scheduled to coincide with the 75th anniversary of D-Day — June 6, 2019 — but it was delayed by the federal government shutdown in December/January 2018-2019. The museum reopened to the public July 29 and held an official rededication Saturday, Oct. 12, the weekend coinciding with Eisenhower’s birthday Oct. 14.

According to Hammatt, the challenge posed by the redesign was to create an exhibit that would be attractive to visitors, fewer of whom each year have any personal connection to, or memory of, the 34th president and first lady.

Museum curator William Snyder added that the exhibit needed to appeal to serious researchers and curious tourists and be fair and balanced — “consequential, contemporary, and relevant.”

The new exhibit — redesigned at a cost of about $9 million — consists of 25,000 square feet of exhibition space offering the latest technology, including digital interactive stations and mini-theaters showing seven new films with footage drawn from the National Archives. Design assistance was provided by The PRD Group based in Chantilly, Virginia.

Visitors entering the exhibit explore Eisenhower’s childhood in Abilene. Next comes a space devoted to his early military postings, in which visitors are introduced to Mamie, who met Dwight when he was in Texas on his first tour of duty at Fort Sam Houston.

Viewers then explore the years leading up to World War II. A separate section — and perhaps the major attraction for many visitors — features D-Day artifacts, including the planning table, maps, a harbor model and the famous “in case of failure” note.

On the day before D-Day, Eisenhower prepared a note to be released to the public in the event that the invasion failed. It read in part: “The troops, the air, and the navy did all that bravery and devotion to duty could do. If any blame or fault attaches to the attempt it is mine alone.”

D-Day was a success and helped prepare the way for Eisenhower’s election to the presidency, the topic of two galleries appropriately titled “Warrior for Peace” and “Promoting Prosperity.” Upon entering the first of these two galleries, visitors will be struck by the posting of Eisenhower’s comment: “I hate war as only a soldier who lived it can” — this from a man whose military service to the nation remains second to none.

Highlighted in the following space are challenges and opportunities on the domestic front, from the Civil Rights Movement to building the interstate highway system, from an age of prosperity for many to poverty for others.

Interspersed throughout the exhibit is an extensive array of manuscripts, photos, videos and other artifacts, 98 percent drawn from the Eisenhower Library’s collection of some 26 million pages of records and papers, 335,000 photographs, 768,000 feet of original motion picture film and 70,000 artifacts.

The museum sits on a 22-acre site that also includes Eisenhower’s boyhood home; the graves of Dwight and Mamie with their son Doud, who died at age three; and a bronze statue of Eisenhower in his familiar World War II “Eisenhower Jacket,” set against a backdrop of five pylons.

There is also a new temporary gallery space. Its inaugural exhibit: “De Gaulle/Eisenhower: Alliance and Friendship in War and Peace,” is a bilingual exploration of the parallel lives of the American and French leaders, produced by the First Alliance Foundation in Paris.

The Eisenhower Presidential Library and Museum draws about 200,000 visitors each year. Exhibits and programs are made possible in part by the Eisenhower Foundation.