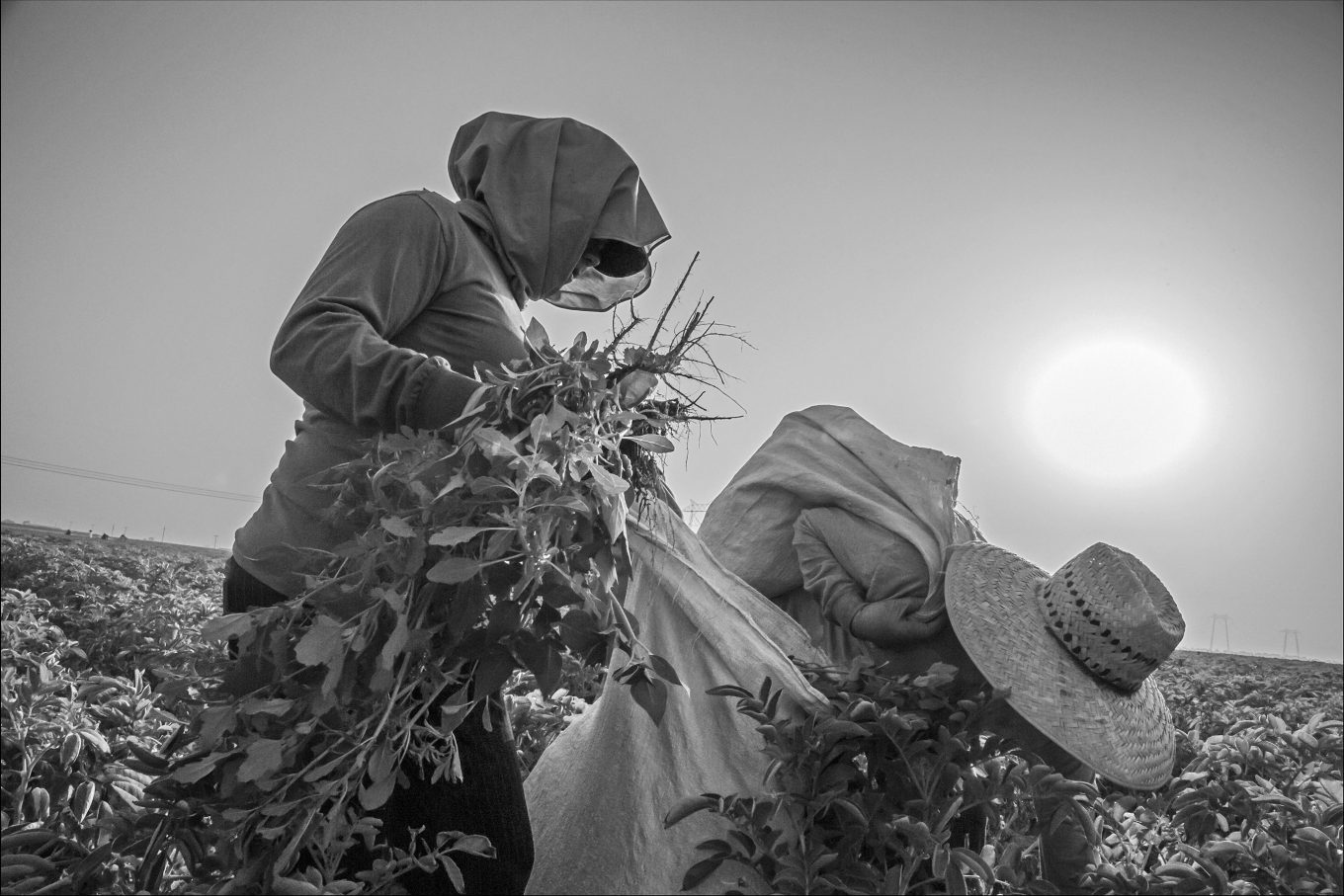 It’s not often that a public library hosts an exhibition of photography by a nationally recognized photographer whose work is so meaningful that Stanford University has an archive dedicated to his work, but that is precisely what has taken place at the Kansas City, Kansas Public Library with David Bacon’s “In the Fields of the North / En los Campos del Norte.”

Combining oral narrative with photography, the exhibit explores the lives of migrant farm workers through Bacon’s photojournalist eyes. Gritty yet sensitive, existentialist yet empathetic, and raw yet tender, Bacon’s work (which can also be found in his 2017 book of the same name), is especially moving given the backlash against migrants and immigrants that has been swelling over the last decade or so.

Seasoned through three decades of documentary photography, Bacon travelled with migrant workers through their labor cycle from Mexico to Washington state, exploring their daily lived experience with gentle intention.

“Bacon captures the humanity of workers who work each day in demanding physical labor, in the hot sun, and for poverty wages. This is one of the few publications that captures the authentic stories of California farmworkers, through their own voices and with the images of their living and working conditions,” Kent Wong, Director of the UCLA Labor Center, wrote in the “In the Fields of the North” book.

Ever focused, Bacon himself has stated, “We’re not just victims of bad circumstances. We are also capable of changing them, and in fact, I think that’s the process that’s really the most interesting — the combination where you see the world that people are living in, and how people respond to it, and then what they do.  And that’s kind of my approach to writing and photography both; that’s what I’m doing.”

While each photograph is informative, inspiring, and a call for action, several stand out from the rest. “Mom and Child” presents a young mother and her child in a migrant camp. Even though the tents are somewhat shoddy, and the ground strewn with objects, the mother is serene as she looks at something off camera. There is something poignant in this photograph, almost as if there is a quiet resignation to the fact that this will be their daily lives for the foreseeable future.

“Maria Antonietta Gonzalez” engages us with a couple harvesting what appear to be vegetables from an endless field. With a bandana on her head, the female concentrates on her task, knowing that her daily pay depends on it. Right behind her, a male dutifully places the crop she picks into buckets. Together they are working, denied the comforts afforded those who directly benefit from their labor but still focused and productive.

The photographs are probing. One shows the tobacco fluids on a worker’s hand, and another perfectly demonstrates the subject’s weariness through lines etched on a worker’s face.

The labork of migrant workers is hard and sometimes dangerous. For those of us who drive to and from a set workplace daily, a lifestyle of constant migration is unimaginable. However, Bacon has provided a very personal and intimate look into this difficult way of life.

For me, the exhibit brought to mind a quote by John Donne, often cited by Dr. Martin Luther King Jr.: “Each man’s death diminishes me, for I am involved in mankind. Therefore, send not to know for whom the bell tolls. It tolls for thee.”

We are only as good as we treat the least enfranchised among us. As we move deeper in the holiday season with its emphasis on parties, balls, and spending millions of dollars on items purely for entertainment, David Bacon’s exhibit at the Kansas City Kansas Public Library would make a very meaningful first stop for us to contemplate our obligation to our fellow human beings, regardless of citizenship and ethnicity.