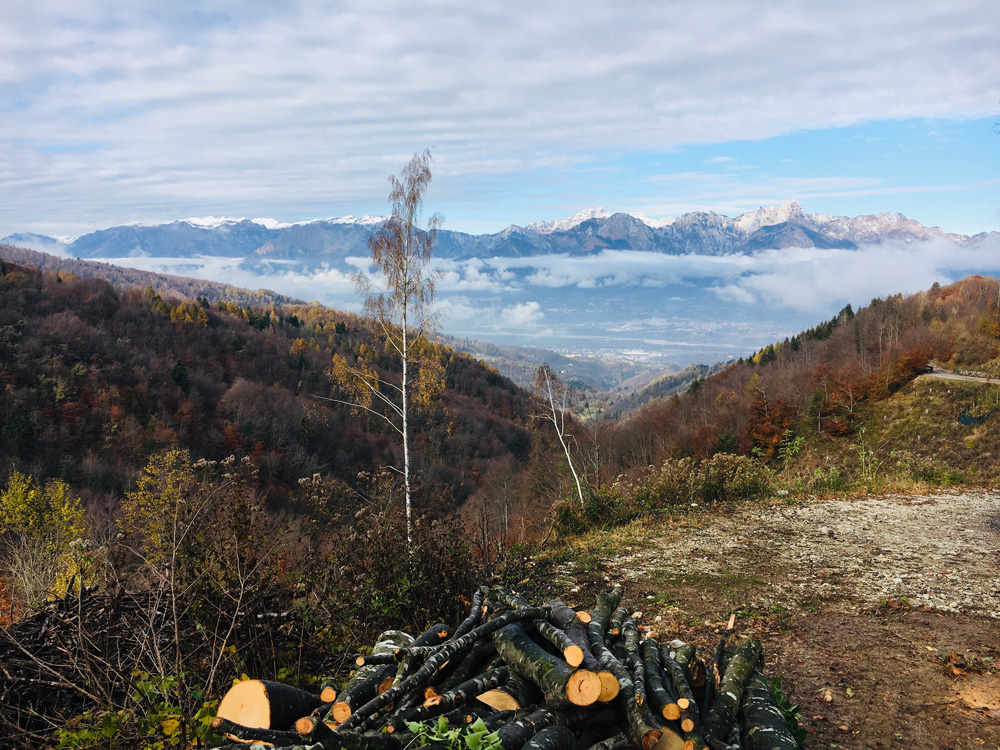 View of the Dolomite Mountains

In the brief time after COVID-19 vaccinations and before the surge of the Delta and Omicron variants, my husband, Jerry Eisterhold, and I trepidaciously accepted an invitation to the Veneto region of Italy to celebrate the Italian premiere of the prizewinning documentary, “Vitis Prohibita (Forbidden Grapes)” by our friend Stéfan Balay (available on Amazon).

Jerry’s experiment making wines with native American grape varieties at Vox Vineyards, outside of Kansas City, is featured in the documentary. Of course, we had to go.

Airfare to Venice was reasonable and hotels cheap, so first we spent several days revisiting the city. Imagine Venice with few tourists and no cruise ships?

Many of the cultural institutions were closed, but that meant we could spend our time walking around. The pandemic had little effect on the quality of Venetian food. We made reservations, masked up and then presented our IDs and US vaccination cards everywhere.

Our friend, Jonathan Taggart, is working with Maine and Venetian fishermen to market a green crab that has invaded Maine waters, but in is, in fact, a Venetian delicacy known “moleche.”

The crab is taking off in New York restaurants and elsewhere. We set out to eat all the fried, soft-shelled green crabs we could find. Delicious and righteous.

Jonathan had recommended another Venetian delicacy, “capesante,” small scallops from the Venetian lagoon.

We happened upon the Biennale Architecttura 2021 (https://www.labiennale.org/en/architecture/2021), where hundreds of architects were invited to answer the question, “How will we live together?” We’d heard that several Kansas City architectural firms participated, but we did not find them.

With only two days to view acres of displays, Jerry had to decide between at least glimpsing half of the posters or reading a just few of them. So, unfortunately, he did not leave with the answer to, “How we would all live together.”

Jerry, now a senior citizen celebrating on his birthday trip, eagerly took advantage of the senior-only seating on the ferry/vaporetto. He was chased off by a wizened little man, who clearly thought the big German American tourist looked too young to deserve senior seating.

While visiting Padua, we had the most spectacular crudo dish ever. The regional fish distributor for the Venetian lagoon has a restaurant in Padua, near their warehouse and far from the tourist trade.

St. Anthony was a famed orator and an early companion of St. Francis of Assisi.  Pray to St. Anthony for assistance in finding lost things. No photographs were allowed in the shrine. So the image I have is from a handout.  There is a bit of the True Cross, the Crown of Thorns, St Laurence’s finger and other precious items.

There were more relics than we’ve ever seen in one place.

Dante wrote the Divine Comedy here. In it, he placed a usurer, one Scrovegni, in the First Circle of Hell.  In order to extract Scrovegni’s soul from eternal damnation, the usurer’s son built the Scrovegni Chapel, with frescos by Giotto, where the artist breaks away from Medieval art into the early Renaissance.

The University of Padua, founded in 1222 (the second-oldest university in the western world), was where Galileo taught, Copernicus studied canon law, William Harvey studied medicine, at least three popes attended and where Elena Lucrezia Cornaro Piscopia, in 1678, became the first woman to receive a doctorate.

The Palazzo Bo, 1493, seat of the University, was an unexpected discovery. The visitor travels from the Middle Ages to Renaissance and into the 20th century. The expansion in 1932-43 by architect Ettore Fagiuoli is in the Modernist style, favored by Mussolini’s fascist party.

The column in the center of the relief was originally carved with the four “births” of modern Italy. However, after World War II war, the carvings of the “births” were erased.

Architect Gio Ponti was responsible for some amazing interiors in the building. The walls are chock-a-block with allegorical and historic murals, and most of Ponti’s furniture and fittings remain. The last segment in the Great Hall was meant to celebrate the Fascist regime. However, it wasn’t finished when work stopped in 1941.  They seem pretty chill about it, “Well, it just didn’t turn out that way.”

The oldest botanical garden in the world, from 1545, is at the University of Padua, and delightful even in the late fall. The garden had a section devoted to American wine grapes, now forbidden by the European Union.

The Northern Veneto and the Forbidden Grapes

Back the American grape story… The highlight of the trip was the visit to Castelbrando, a fortress built by the Romans and added on to every century or so. Located in the foothills of the Dolomite Mountains, above Prosecco vineyards, the castle is now a hotel complete with spa and a torture museum in the dungeons. The “Vitis Prohibita” documentary was shown there.

Franco Zambon, who organized the screening event at Castelbrando, has thousands of viticultural books. The book below has quite a few mentions of C.V. Riley and other Missouri agricultural notables. In the background is a printout of the Vox Vineyards and some of our grapes. Visit VoxVineyards.com for more details on the Missouri story.

Franco and his friends are avid home winemakers, growing the American varietal “Clinton” imported to Europe in the 1800s, because it is tough and tasty. However, this wine is illegal in the European Union.

Beginning in the early 1930s, a prominent Austrian viticulturist, Dr. Fritz Zwiegelt, member of the Nazi Party, was alarmed by the spread of the prolific American grapes and feared the economic detriment to the traditional European vinifera varieties (Chardonnay, Pinot Noir, Cabernet, etc.). He started a movement to ban all American wine varietals. However, he overlooked that the European varieties had been saved from phylloxera by grafting onto American rootstock.

Zweigelt promoted an obscure study seeking to prove that American varietals had high quantities of methanol that would cause anger in men, hysteria in women and hallucinations and degeneration in children. Numerous studies have since disproved this.

Naturally, the European Union has chosen to support the European vinifera varieties. Growing American varietals is permissible, but the resulting fermented juice cannot be called wine or sold. Franco and other winemakers throughout Europe wish to legalize wine made from the American varietals, pointing out that these grapes are better suited to climate change.

We were invited to a festive tasting of these forbidden Clinton wines, which everyone drinks, even the police, though no money is exchanged … only favors and influence.

Since it is forbidden for the restaurant to have any of these wines in it, our event was held out of sight in the basement, even though regional commissioners and politicians were in attendance.

One commissioner of the Veneto (in the tan jacket next to Franco) is sympathetic to reform, but his superior (to Franco’s left) is not. Her superior, a primo politician of the Veneto, did not attend the dinner to avoid any suggestion of support for the Forbidden Grapes. Other invited deputies stayed away for fear of their careers … or so we were told.

Copious amounts of delicious food were served, including a mixed meat grill roasted on the spit for four hours. The political tension, which we only half understood, and the multiple courses did make for a Fellini-esque meal.

Many toasts were made with Clinton wine and Vox Vineyards prizewinners relieved the tension. One commissioner polished off half a bottle of Vox Wetumka Report with the tiramisu, a good sign. Fortunately, no one got sick or went insane.

We were warmly invited to another meal as a “thank you” for our efforts with the commissioners and gifted with many bottles of homemade wine to bring back to the US, which made for an interesting Thanksgiving.

This restaurant specialized in pizzas. The owners had bought out the previous family who had run the place for generations. So, there was a degree of friendly suspicion about the incomers and their fancy pizza. Completely unjustified in my opinion because the pizzas were fantastic, though Jerry’s had purple potatoes on it, which our friends found a bit dubious. Only one person tried a potato. He was surprised that it tasted like potato.

Old traditions die hard in this region. Franco explained that none of them spoke very fluent Italian, or even Venetian Italian, and most of them learned French as their “foreign” language. Franco has three grown-up children. The eldest, who is in Franco’s business, has moved far away (which means three miles from home) to the next “campanile,” or parish bell tower. The daughters all stayed within a half a mile in the same parish within sight of their campanile.