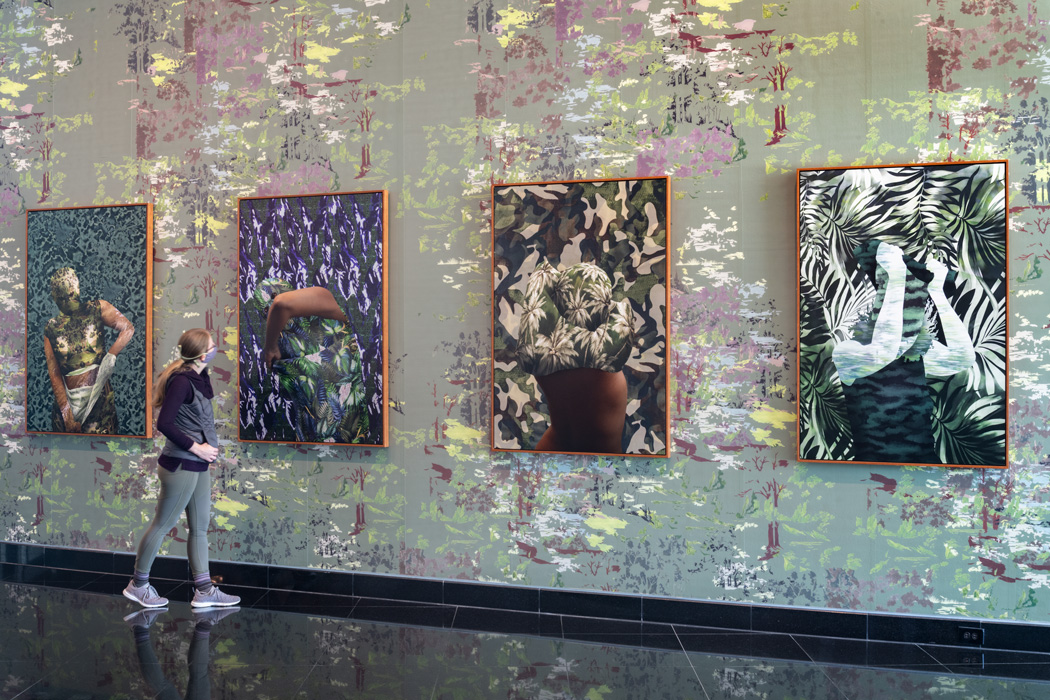 “Joiri Minaya: Divergences,” Kemper Museum’s fifth commissioned installation in the Atrium Projects series, extends far beyond the wall upon which it resides. Organized by Assistant Curator Jade Powers, it is a piece both compelling and complex, drawing attention, Powers says, “to the contested connections between nature and femininity, idealized bodies and the stereotypes and exoticization of the Caribbean female body.”

Minaya, a New York-based Black Latinx artist raised in the Dominican Republic, activates the atrium space with four framed digital collages mounted on a floor-to-ceiling digital print on vinyl. Titled “A marooned picturesque (Redecode #3),” this background print is a work in its own right, featuring an expansive field of lush green overlaid with a vibrant dappled pattern of greens, white, brown and pink that float, flitter and recede within the wall space.

At once hyperreal and illusionistic, the framed collages depict Minaya’s dynamic form removing tropically patterned, constraining bodysuits against pixilated, high-contrast patterned grounds. Bare skin and eyes beneath full-face masks are revealed as the bodysuits are removed: a bent arm in “Irreducible Convergence,” a bare back in “Away from Prying Eyes” and a torso in “Shedding.” Performative and evocative, the paradoxical images simultaneously evoke enchantment, apprehension, control and freneticism.

“My work is a reassertion of Self, an exercise of unlearning, decolonizing and exorcising imposed histories, cultures and ideas,” Minaya says in her artist statement. “I’ve learned there is a gaze thrust upon me which bothers me. I turn it upon itself, mainly by seeming to fulfill its expectations, but instead sabotaging them, thus regaining power and agency.”

Powers, who began working with Minaya in July 2019, said she was excited about the artist’s use of post-colonial theory in her work. Minaya visited Kansas City in January 2020, and in the middle of winter, she and Powers drove to the historic Quindaro Townsite in Kansas City, Kansas, an abolitionist community established in 1856 that helped connect slaves to the underground railroad and move them to freedom.

Excavated and rediscovered in the 1980s, Quindaro is a key inspiration for “Divergences,” linking Minaya’s explorations of post-colonial theory and imposed identity with themes of escape, evinced by the bodysuit collages, but also by “A marooned picturesque (Redecode #3).” The wall covering was inspired by an archived image of a mid-century forest landscape from the J.C. Eisenhart Wallpaper Company, which Minaya subverted by digitally deconstructing the bucolic natural scene and interspersing it with an abstracted overview of Quindaro to create the pattern cloaking the atrium wall.

Minaya’s “Divergences” combines her new research on Quindaro with ideas and images from her previous installations, including “Containers,” an ongoing series of performative photographs featuring the artist in tropically patterned bodysuits she made herself.

“Joiri Minaya: Divergences” continues at Kemper Museum of Contemporary Art, 4420 Warwick Blvd., through July 17. Hours are 10 a.m. to 4 p.m. Wednesday, Friday, Saturday and Sunday and 10 a.m. to 9 p.m. Thursday. During the pandemic, admission is by free timed-entry ticket only, and masks are required. Reserve tickets at www.kemperart.org or call 816.753.5784.

All images by E.G. Schempf

Heather Lustfeldt is a writer, educator and arts professional with a passion for public program development and community engagement for audiences of all ages, abilities and backgrounds. Heather lives in Kansas City with her two sons.