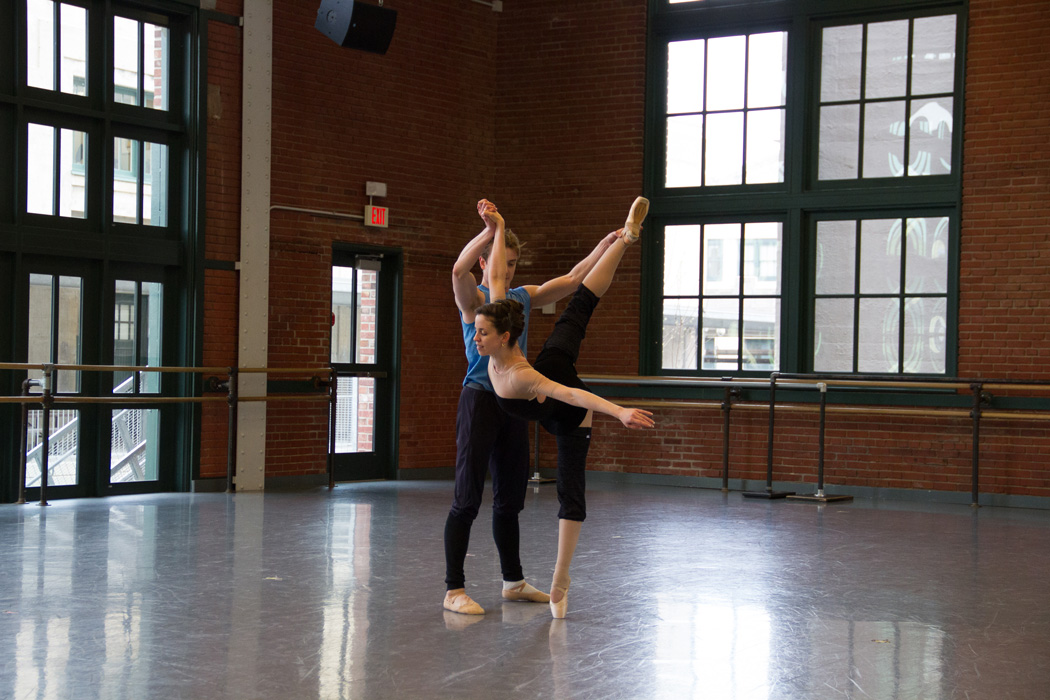 The 1940s in America were a time of unrest, with the atrocities of World War II, the terror of the atom bomb, and the rising threat of Communism. It’s also the decade that gave us “Bambi,” bobby soxers, and “It’s a Wonderful Life.”

All three are company premieres. “It’s very challenging for the company, because there are extreme differences,” explained Carney. “It’s not cookie-cutter ballet. They are all unique.”

Robbins’ “Interplay” opens the show in the Muriel Kauffman Theatre. It was originally conceived for the Broadway stage in 1945 and then reshaped as a ballet for what is now the American Ballet Theatre. It’s a breezy, summery piece pulled from the streets of New York City, set to Morton Gould’s “American Concertette,” a jazz-infused score for piano and orchestra: syncopated and energetic.

Kansas City Ballet brought in the legendary Judith Fugate, longtime principal ballerina for the New York City Ballet, to set both Robbins’ “Interplay” and Balanchine’s “Theme and Variations.” As repetiteur for the Jerome Robbins Rights Trust and the George Balanchine Trust, she serves as a direct link to these two iconic choreographers.

“Interplay” was also one of the first pieces Carney ballet-mastered with the Boston Ballet. “Interplay has got such a great sense of friendship,” said Carney. “It’s really fun, very light-hearted.”

The Lottery
“The Lottery” takes this nostalgic comfort and confounds it, based on Shirley Jackson’s story of an idyllic town harboring a barbaric practice of human sacrifice. Period costumes and simple set design create a muted palette for monstrous deeds. It’s “very Hitchcockian [and] a little bit creepy at times,” said Carney.

The original score, written by Robert Moran, gives “some sense of that time in our world, in America in the ’40s, and what sort of energies were happening at that time. It was a war-torn country at that point,” explained Carney, citing “Coplandesque references, with that sense of wide open spaces” and percussive sections that insinuate Stravinsky a la “Rite.”

But the challenge for the company — and part of the work’s intrigue and success — is the final variation. “The ending is never the same twice. It’s a lottery and it’s literally a live, onstage lottery.”

“Every single dancer has to be ready to do that solo,” Carney said. “That’s going to be our big challenge, because we have to prepare 13 dancers to execute this final dance, this angst variation, full of a sense of abandonment and betrayal of everybody in her or his known world, with the ultimate understanding that they are about to die.”

“The ending is so intense . . . [Val] takes you right up to the brink and then” — Carney snapped his fingers — “you are left to imagine what comes next, which is smart theater, you know? The imagination is stronger than reality.”

But you don’t need to know the full story to appreciate the work. In fact, Carney didn’t know it when he first saw “The Lottery” at the Joyce Theater in New York City, performed by Salt Lake City’s Ballet West, who commissioned it. “The audience response was phenomenal. I thought this was a strong piece of theater on its own two legs, no aid, no history, just as a piece of art work.” Kansas City Ballet is the second company in the world to perform it.

Balanchine’s “Theme and Variations”
The final work on the program, though, Carney knows completely, having danced the lead male role all over the world with the Boston Ballet. “There’s such a connection with my past, with a lot of dancers’ pasts, and what’s wonderful is to bring this to the Kansas City Ballet dancers and give them this opportunity for another generation to have this experience of dancing one of Balanchine’s most well-known works, and his most classical work, hands down,” complete with tutus and tiaras.

“It has a very Balanchine feel to it: very stretched and elongated and extremely musical,” he said. “I’m amazed at how light-years beyond people he was for his time.” The work is set on the final movement of Pyotr Illyich Tchaikovsky’s Orchestral Suite no. 3. “There’s a great sense of grandiose, a sense of regality, even though it pushes the boundaries of the technical facilities, especially of the ballerina.” He laughed, “It’s Herculean!”

The ballerina, on alternating performances, is either Tempe Ostergren or Taryn Mejia, paired with Liang Fu or Lamin Pereira dos Santos, respectively. There are exciting, iconic variations for the male dancer with machismo leaps and double pirouettes, but Carney thinks most fondly of the pas de deux. “There’s a genuine connection to the female. . . It has a sense of timelessness, where the ballerina is really the ballerina, and the male is there to support her and make her look phenomenal. There’s no grandstanding by the guy — it’s made for her — but it gives the male a real sense of responsibility and contribution.”

With a full corps, soloists and stunning principals, it’s a bold statement and testament to the progress — and future — of the Kansas City Ballet. “I love the sense of going out big, you know. That’s why I chose that to finish the season — because it’s an exciting fun work to finish it off with.”

Together, the three pieces form a thoughtful, well-rounded program, exemplifying the decade. It was a catalytic period in American history — a time of frightening events, true, but also a time of emboldened youth and larger-than-life glamor — making for an evening of dance that serves the present as much as it looks to the past.   o

The Kansas City Ballet’s “Director’s Choice” performance runs May 12 – 21 at the Kauffman Center for the Performing Arts. For more information and tickets, www.kcballet.org.