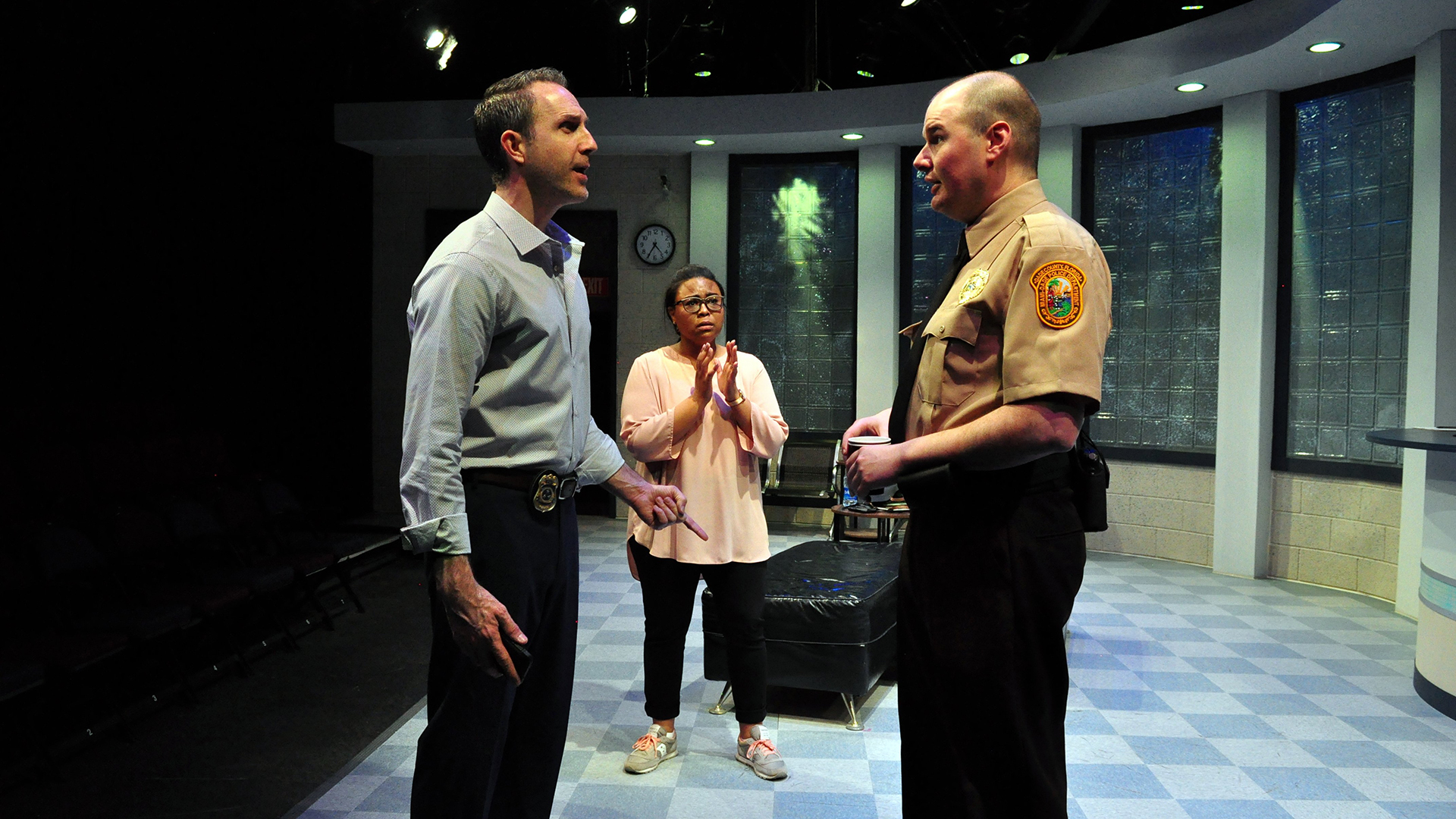 As the theater community reels from a community-wide shutdown ordered by public officials on both sides of the state line, artistic leaders are faced with two questions: How long? What next?

In response to the COVID-19 pandemic, Mayor Quinton Lucas on March 13 issued a proclamation declaring a state of emergency in Kansas City that limited crowd sizes to 1,000 or less for eight weeks. His decision prompted cancellation and postponement of some productions poised to open or already running. Two days later he revised the decree, ordering gatherings of no more than 50.

Next, leaders from Jackson County and, on the Kansas side, Johnson County and the Unified Government of Wyandotte County and Kansas City, Kan., issued a joint stay-at-home order for 30 days beginning March 24. Exceptions would be made for people conducting essential business, including buying groceries and traveling to medical appointments.

Seasons have been cancelled or radically rearranged. And ticket revenue, a vital part of any performing arts organization’s revenue, suddenly dried up. That, inevitably, led to belt-tightening.

“Depending on the duration of the crisis, we may make further staff adjustments,” artistic director Stuart Carden and executive director Angela Gieras said in a joint statement issued March 30. They added that they were studying the effects of the $2 trillion coronavirus relief package passed by both houses of congress and signed by the president, which included some support for the arts.

“We are focused on how to emerge from this unprecedented situation with a stabilized . . . staff and also be able to serve our community for generations to come,” Carden and Gieras said.

Jeff Bentley, executive director of Kansas City Ballet, said the organization “has had to take decisive action to stem the loss of resources.” Celts, a program that included Irish dance scheduled for May, has been cancelled. New Moves, a contemporary dance performance, has been moved from March to September. The company’s ballet school has closed.

“All of our traditional revenues, including ticket sales, tuition, endowment earnings and more have been curtailed,” Bentley said in a statement.

Even so, Bentley said the ballet company’s standing corps of dancers would continue to be paid. “It is of major importance that we keep our artists whole,” he said. “Valuing the work that they do onstage, in rehearsal and in our community is not just lip service. Therefore we have committed to pay the company dancers and keep their benefits intact through the contract period for the remaining nine weeks.”

But Bentley added that the ballet has “had to make personally wrenching decisions that affect every single person in our organization. Several of our colleagues have been furloughed for periods of time. Others have had significant reductions in compensation. Most regrettably of all, the work of some positions has been permanently absorbed by others. It is our hope and intention that most of these decisions will be short term.”

Like the Rep, the ballet is looking into the federal relief legislation and will solicit current supporters and donors to maintain or increase contributions to the company. Some of them, Bentley said, have already made generous contributions. The primary focus now is “how to emerge from this unprecedented situation with a stabilized (group of) artists and staff. This moment in time is just that — a moment. At some unknowable point, things will return to normal. A new normal, perhaps. But dance will happen, music will be heard. Creativity will once again assume its rightful place in our daily lives and hearts. And Kansas City Ballet will be here.”

“We were particularly saddened to cut short, midstream, the run of our Lucia on immediate notice,” Sandler said. “We treated our principal cast, chorus and crew as members of the family and compensated them.”

The cancelled production of “The Shining,” which had been scheduled for April and May, meant that “designers, directors, conductors, chorus singers and crew . . . lost pay as a result of these cancellations.”

In addition, Sandler said, the opera eliminated or furloughed three part-time administrative positions. “We have a lean full time staff and so far there have been no layoffs. We are all hard at work with the goal of coming through this as strong as possible so we may present the exciting season we have planned beginning next fall.”

One bright spot: The New Theatre in Overland Park, the metro area’s only major for-profit theater company. Although the company cancelled the last four weeks of a commercially successful run of  “The Church Basement Ladies” as well as the first two weeks of the next scheduled show, “Million Dollar Quartet,” no employees have been laid off. Owners Richard Carrothers and Dennis Hennessy have continued paying the staff during the shut down, according to Rob McGraw, the company’s vice president of sales and marketing.

“This is a whole new frontier for us,” McGraw said.

Smaller not-for-profit organizations have their own daunting challenges. The Unicorn Theatre, for example, cancelled the final two weeks of one show, “American Son,” and postponed another, “The Lifespan of a Fact.”

“That means no income for two months,” Cynthia Levin, the Unicorn’s producing artistic director, said in a March 20 email to supporters and subscribers. “But our expenses haven’t stopped. This is a potential threat to Unicorn Theatre. We are committed to paying our staff. We have paid severance to artists and technicians . . . Although we have eliminated non-essential spending our building still needs to be cared for.”

A donation of at least $100 would make a difference, Levin told supporters. Other not-for-profit theater companies have made similar requests. Some have encouraged patrons to convert tickets to cancelled shows into donations.

Levin also added her personal perspective: “I’ve been doing this for over 40 years. I’ve never seen anything like it.”

Just up Main Street from the Unicorn, the small Metropolitan Ensemble Theatre was forced to postpone its March-April production, “Mother of the Maid,” until September. Scheduling for the rest of the season was thrown into question. In a letter to season-ticket holders and supporters, artistic director Karen Paisley and board president Brad Dawby outlined the situation and what has to happen going forward.

“Dear friends, things are tough now,” they wrote. “There’s only so much Netflix a person can stand. But more seriously, you are always in our thoughts. We may be own, folks, but we ain’t out. We look forward to seeing everyone again very soon.”

Paisley said she had turned off gas to the building to save money.

“I’m working on negotiations with the utility companies to buy time,” she said. “So far, everyone I’ve talked to in the business world has been wonderful about helping. As far as those things go, we are in great shape with out community partners. Their kindness is overwhelming. We’re going to go ahead and put season tickets on sale (for the next season) and put those funds on hold. We’re working for free right now.”

Sidonie Garrett, artistic director of the Heart of America Shakespeare Festival, is guardedly optimist the summer production of “The Tempest,” scheduled to begin performances June 16 in Southmoreland Park, will go on as planned. But she’s also acutely aware that the ban on public gatherings intended to thwart the rate of infection, could be extended.

“At this time we’re planning to continue, but when you look at all the possibilities out there you have to look at all scenarios,” Garrett said. “We have to start rehearsals May 26. That’s a pretty short time frame. What happens if the economy does not recover in six months?”

Garrett said because of the traditional mid-summer schedule, the festival has access to resources that might not be available later in the year. Moving indoors, in Garrett’s view, is not an option. That would require a venue with a three-to-four week window of availability.

“We’re doing everything to plan, but there are so many unknowns, Garrett said.

One small theater company has found a temporary solution to the impossibility of live performances. Kansas City Public Theatre will present a live-streaming “devised play project” which remote “theatergoers” can access with their favored tablet, smart phone or desk computer. The play is titled “Oh, God, Really?” and consists of 30 short plays contributed by local writers.

Elizabeth Bettendorf Bowman, artistic director, said the play depicts “Fate bringing a group of childhood friends together at an abandoned roller rink in search of an illustrious and mysterious Smurfette doll. Friendships will be tested, skate-offs will be had and time streams will be crossed.”

Bowman said each actor will perform remotely but will be able to see each other using the Zoom app. And, no, they will not be able to see the audience.

People can watch live at 7:30 p.m. April 6 by going to the KC Public Theatre’s Facebook page or its website.

Actors, like other members of the so-called gig economy, are lucky if they can string together a run of back-to-back shows to maintain steady employment. But that won’t be possible for awhile.

Walter Coppage was in Portland, Oregon, in the second week of “The Curious Incident of the Dog in the Night-Time” when the cast got the message: The show had to close. The director, Marissa Wolf, was remounting a production of a show she directed when she was an associate artistic director at KC Rep. Now Coppage is back in Kansas City, wondering when his next gig might be.

“I have some stuff I’m talking to people about, but I imagine everything is up in the air at this point,” Coppage said. “There are shows in the fall and winter, I assume, but I don’t know.”

Coppage said the side gigs, like teaching, have come to a screeching halt as well.

“It’s surreal,” he said. “I’m watching this unfold from inside my house. I felt sorry for me initially, but then I realized it’s everybody Not just my friends in theater. It’s just unprecedented to have virtually every industry stop. It’s gonna be hard times for a little bit.”

Above: “American Son,” a co-production between the Unicorn Theatre and Black Repertory Theatre of Kansas City, was cancelled mid-run at the Unicorn. (Cynthia Levin)

In these uncertain times, KC Studio is here for you. Using information provided by local theaters and performing arts organizations, we’ve curated a page of resources to help our readers continue to enjoying and supporting the arts. This page will continue to be updated as we receive new content, so please return often.

Organizations: if you would like to share information on online performances or ways to donate, please send links and information to newsletter@kcstudio.org. Please continue sending us your press releases and information on cancellations. We will do our best to share your news through KC Studio‘s social media feeds.