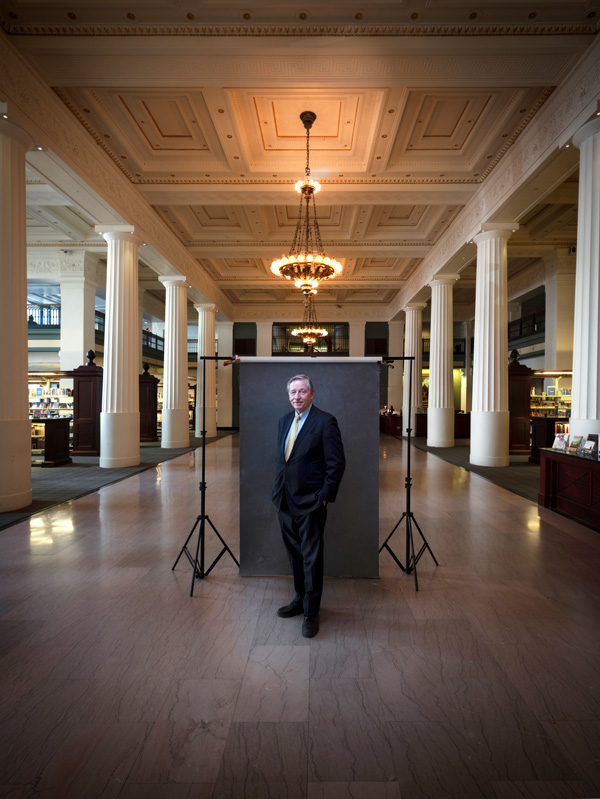 Nov. 6, 2018 was a great day for the Kansas City Public Library. Voters approved an 8-cent increase in the operating levy, which provides most of the institution’s funding. Nearly 84 percent voted “yes” — the largest margin of victory for a library-related ballot issue anywhere in the country!

Crosby Kemper III, the library’s executive director, sees “a lot of validation” in those numbers, but no cause for wild celebration. As he’s quick to point out, library funding had declined annually since 2012, due to Missouri’s Hancock Amendment and the redirection of certain tax dollars. “We’re proud and encouraged to do more. But it’s not like we’ve found a pot of gold at the end of the rainbow. We’re still looking for more private support.”

The director’s post-election shopping list also included new computers — lots of them. His goal is to have nearly 500 available for public use. In fact, the library’s commitment to online education and virtual learning programs puts them “pretty close to the cutting edge.” He thinks it aligns perfectly with what Andrew Carnegie originally wanted libraries to be — places for networking and self-improvement. Only now with 21st-century tools.

Along with upgrades to the library’s physical plant and digital realm, Kansas City voters were promised something else last fall. Something a little . . . well, sexier, i.e., more of the unique, high-quality programming that’s grown dramatically since Kemper took the helm in 2007.

Indeed, a quick scan of “signature events” from the last few years turns up a jaw-dropping number of lectures, readings, panels and presentations featuring authors, historians, civic leaders, politicos, architects, designers, actors and musicians. Even the cast of TV’s “Queer Eye” stopped by while the show was filming episodes in the metro!

Most events are staged before sizable crowds (sometimes standing room only) at the Central Library downtown or the Plaza branch, and they’re always free.

Steve Paul, himself an author and occasional presenter at library events, fondly remembers hearing both fiction writer Jill Lepore, and Susan Orlean, known for her nonfiction work, speak there within a few weeks of each other. “At a time when local media generally ignore book culture,” he says, “the library’s many programs . . . are a lifeline for those among us who still find nourishment in reading and writing.”

James Greene echoes that sentiment. “I think Mr. Kemper does a phenomenal job in making the library a place for exchanging ideas.” Greene and his wife, Ann, attend library events often. They’ve enjoyed talks by everyone from Sandra Day O’Connor and David McCullough to sportscaster Denny Matthews, whom Greene recalls telling a great off-the-field story about Willie Mays and Stan Musial.

They’ve also digested the complex thoughts of expert witnesses on education reform, financial literacy and even matters of military significance explained by officers from the Command General Staff College at Fort Leavenworth. Greene describes it as “similar to campfire discussions at a National Park where you know you’re going to learn something.”

And more often than not, the man in the middle of that learning is the executive director himself. Kemper didn’t originally plan to play such an active role in so many events but admits that he warmed to it quickly. “I have always enjoyed talking with really smart people who are passionate about what they do. I like the back and forth.” He also realized early on that audiences “liked having a narrative, a sort of arc to follow.” Thus, the mission to moderate is one he’s taken to heart, despite and perhaps because of the copious amounts of preparation the job entails.

By all indications, he’s doing it well.

The Yale history major who found Shakespeare in his teens may be the only library director in America with two regional Emmy Awards! He won them for hosting episodes of “Meet the Past,” a PBS TV series colloquially known as “Crosby talks to dead people.”

At first, Kemper did have doubts. In fact, he thought that Henry Fortunato’s idea for him to chat on camera with the likes of Jesse James, Charlie Parker and Annie Chambers was “crazy.” But audiences ate it up. And with the help of talented actors seated regularly in the guest chair, a franchise was born. “People mention it to me all the time,” he muses, “even though we haven’t done any new ones for a while.”

KCPT has also aired several installments of another show hosted by Kemper, “Centropolis.” He envisions it as a home for intimate, substantive talks with local and national authors and journalists (the living kind) — interviews that he hopes will eventually be conducted and recorded at a library location rather than a TV studio.

In fact, building a robust body of original video content and curating it for online viewership is very much on the director’s mind these days. And if enough funding can be found, he hopes to make it a reality in the not-so-distant future.

The library, he argues is 1) a great place for convening meaningful dialogue and 2) an incredible repository of facts, which users can access to dig deeper into what they’ve seen and heard. “We need to clarify what is real information and what isn’t. With the decline of newspapers and a vociferous tendency in our community to split into many communities of various kinds,” Kemper continues, “there’s an opportunity, maybe even a necessity, for someone like the library to step in, to recreate some of the informational aspects and communal aspects of that.”

How might such an enterprise look? It depends on the partners they enlist (UMKC, the city, MARC, etc.) and, as he puts it, “finding the sweet spot” for the best collaborations between them. But it likely includes such familiar formats as political debates, town halls and forums on public policy matters, with an occasional documentary too.

They have already begun incubating some other intriguing possibilities. Like the Big Read events that bring folks together to dissect great novels. Or Wiki-thons, in which interested parties gather to rewrite a particular Wikipedia entry. The library recently hosted one that focused on Kansas City jazz. Another addressed local philanthropy.

Given Kemper’s penchant for things historical, it’s only fitting to finish with a bit of backstory. In 1871, the first Kansas City Library opened its doors, sending signals that the frontier town had finally found culture. Ironically, a single oak bookcase (which the library still has) could hold their entire collection! But in 1887, when the library moved to a grand new building at 9th and Locust, more than 20,000 people passed through in the first two days of operation to marvel at its splendor. And the Western Gallery of Art that took root there literally formed the foundation for today’s Nelson-Atkins Museum of Art!

As the library’s epic journey enters another stretch of uncharted waters, Kemper sees continuity as one of its strengths. “We try to teach people about their inheritance,” he says quietly. “Some of that may come from Greece or Rome or China or wherever, but it also comes out of our own community . . . and the different parts of it that came together to build something special. I think we’re doing a pretty good job of telling that story.”

Randy Mason is best known for his work in public television, but he’s also covered Kansas City arts and artists in print and on the radio for more than three decades.