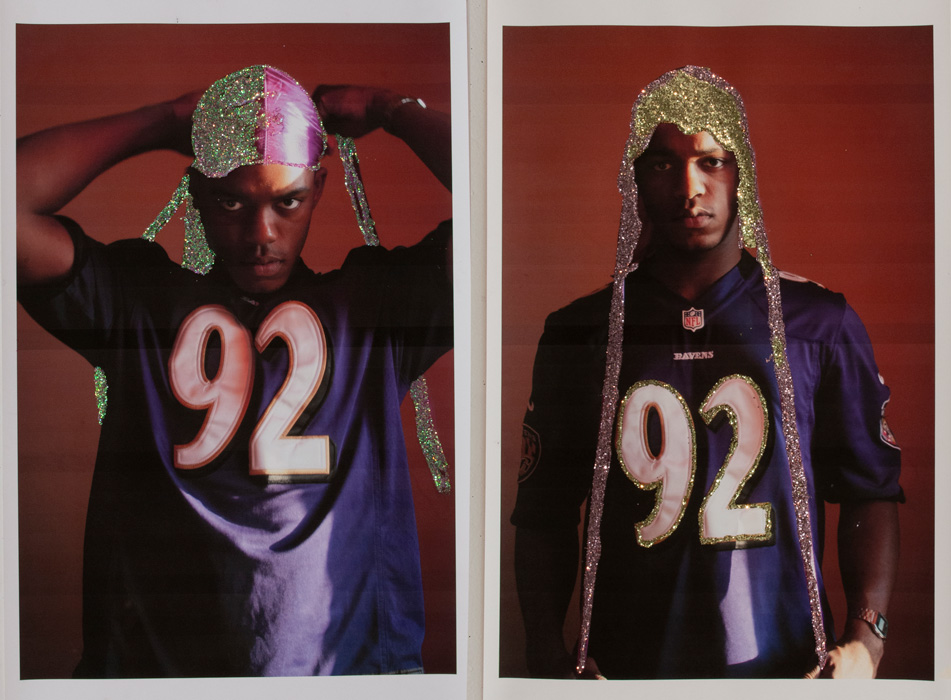 The riveting installation “London Williams & Izsys Archer: In Truth, Black Angels” at Haw Contemporary in the West Bottoms is angelic by virtue of its emotional accessibility and vulnerability. At the same time, it stirs “good trouble” by inviting the viewer to engage in its dialogue on the overlapping issues of race, gender, sexuality and the culture-shifting power and influence of the Black domestic interior.

The accompanying work list states that this interior “curates a visual dialogue to the viewer, unfolding stories and disrupting conversations. Interrogating the interior space (using the home as a physical foundation) by proclaiming our fictions of the self. An invitation for the public to witness dialogue between two emerging Black artists brought together by purpose.”

The installation is multifaceted and multidisciplinary. The sterile white gallery walls have been transformed into a rhythmic composition with collages, magazine and album covers, paintings, drawings, personal letters, shelves adorned with hairbrushes and Black hair products, and photographs. Some artworks are taped to the walls and occasionally fall. According to gallery owner Bill Haw, if one falls to the ground, it remains there until the artist reattaches it, bringing to mind the words of Jackson Pollock, “There is no accident, just as there is no beginning and no end.”

The installation on the walls extends into an assemblage on the floor, which includes photographs, album covers, jewelry, a funeral program, a shawl depicting an angel (as seen in many Black homes) and sculpture.

The artwork themselves are powerful, seen together as a collection and as individual pieces.

“underneath the sheets,” a silver print by Archer, presents the artist gazing straight at the camera while lying on a bare mattress. Archer, a Kansas City Art Institute junior, is nude and curled into a fetal position. The result exudes the confident vulnerability and fearless authenticity, no doubt birthed and nurtured in the Black domestic interior, that characterize those who demand to be present and heard while being Black and maybe queer in today’s America. The intentional graininess and aged look of the print stir thoughts of the weariness they may feel and experience in a society that can reach to the moon and beyond but still struggles to accept their full humanity.

“Don’t Touch My Durag,” a mid-size collage on canvas by Williams, incorporates a large image of a young, nude, Black man with his legs arched back. Eyes closed, his face is etched with a look of anticipation. From the upper right corner of the image, an arm holds his leg back at the knee. His private parts (and possibly those of someone else) are covered by a Durag advertisement superimposed on a piece of fabric using blue tape. It alluringly speaks to the fragile, sometimes caustic, interaction of race, gender and sexuality in Black masculinity.

“Untitled,” also by Williams, is a large charcoal and oil work on paper. Detailed in some places and sparse in others, “Untitled” presents a peaceful living room scene with three young Black men. One of the men is reclining with his head in another’s lap. A photograph of two boys, possibly brothers, in a sleeping embrace adorns the upper left corner, cementing the gentleness and acceptance evoked in this work.

“somethin like the moon,” a large gelatin print by Archer, is another striking work that speaks volumes by itself.  It consists of nine silver gelatin prints composed together and with colors inverted in Photoshop. “I deliberately chose to composite smaller prints together so I’d be able to have an intimate interaction with each segment,” states the artist.

The inverted colors make “somethin like the moon” stark and confrontational. At the same time, Archer’s gaze feels like it is peering into the viewer’s very soul. It is one of the strongest works in the installation.

In an adjacent room, an engrossing video collage is part of the installation. Utilizing and simultaneously showing multiple videos of Archer and Williams in the process of creating art, the video collage is simultaneously raw and refined, including timestamps and icons for other open applications used when recording and producing it. It feels like a voyeuristic deep dive into the artistic process.

Archer states “The work is emphasized through the tangible, fragile experiences of Black womanhood and her divine power. The perpetual use of self-portraiture becomes a performance of identity. I interrogate notions of domesticity, memory and Black iconography.”

Williams adds “I navigate multifaceted Blackness through masculinity and sexuality within paintings, drawings, photographs and mixed media. The work approaches documentation of the domestic interior as a reproach of a history that has yet to be lived.”

I’m not sure if London Williams and Izsys Archer exemplify the “angelic troublemakers” that Bayard Rustin had in mind. However, when I consider how they bravely address the overlapping issues of race/gender/sexuality with their innovative work, I think they very well may be.

If you want to start 2021 with some “good trouble,” then drive to the West Bottoms, go to Haw Contemporary and see this exhibit. (Please wear a mask.)