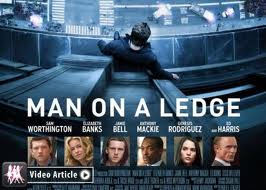 The latest tower heist movie, “Man on a Ledge,” is director Asger Leth’s feature film debut. We begin the day with our possible jumper, Nick Cassidy (played by Sam Worthington) checking into a New York City hotel room, eating breakfast then stepping out on the ledge of his room on the 21st floor. This is only the beginning of his game plan for the day to steal back a $40 million diamond from a real estate developer, David Englander (played by Ed Harris).

Why though? What’s the point of attempting suicide by jumping off a building? Nick is creating a diversion so that his brother, Joey (played Jamie Bell) and girlfriend, Angie (played by Genesis Rodriguez) can steal a diamond from the vault that is in the building across the street. It just so happens that Englander owns both buildings.

It’s still not good enough reason to be on a ledge. Why risk a life for a diamond? Nick supposedly stole the diamond before, at least according to Englander. Nick was a cop a couple years ago. He was hired by Englander to transport the $40 million Monarch Diamond. The diamond came up missing and Nick ended up going to jail for a 25-year sentence. Now you have a guy with nothing to lose. It’s getting better.

Nick learns that his sentence in jail won’t be reduced any time soon. So, he makes a daring high speed escape from his father’s funeral of all places a month before he steps out on the ledge. Once on the ledge, the police arrive and he requests a specific detective, Lydia Mercer (played by Elizabeth Banks).  He wants her because she had previously worked on trying to keep a cop from jumping off a bridge a month earlier, to no avail.  He knows that with the news crews more people will be watching to see if she will lose another jumper.

While on the ledge, Nick is speaking into a hidden mic, giving Joey and Angie instructions on how to circumnavigate the complicated security system. As with most young 20 something couples, they are bickering back and forth during the heist. Adding more tension to an already tense situation. And, with the multi-million dollar security system in place, the last step is covered by a $50 Home Depot security sensor that could be easily disabled by a pocketknife and some luck. It’s simple I know, but don’t think about it too much and you’ll do just fine. 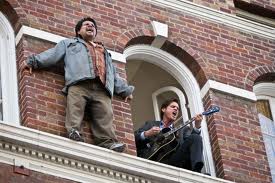 More and more is being revealed as we are on the ledge with Nick. We learn what really happened to the diamond and why Nick is taking a huge gamble to prove his innocence. We also learn Ed Harris can play a convincing super villain type with no soul.

As with any story with two attractive, single professionals there is a relationship developing between Nick and Lydia as she tries to talk him off the ledge. It’s an odd way to start a relationship but that’s Hollywood for you.

Should you see this movie? It’s a draw. On one hand you have a jumper movie that will keep your attention until the end. On the other hand, you have a run-of-the-mill heist movie that has a predictable ending. Throughout most of the film, we are required to leave logic at the ticket booth. We arrive at the end and start putting it all together and realize that a lot of laws were broken and no one is going to jail for breaking into a private safe or for disturbing the peace.  But, if you are looking for a simple action film with some tense moments and twist at the end then this is the movie for you.