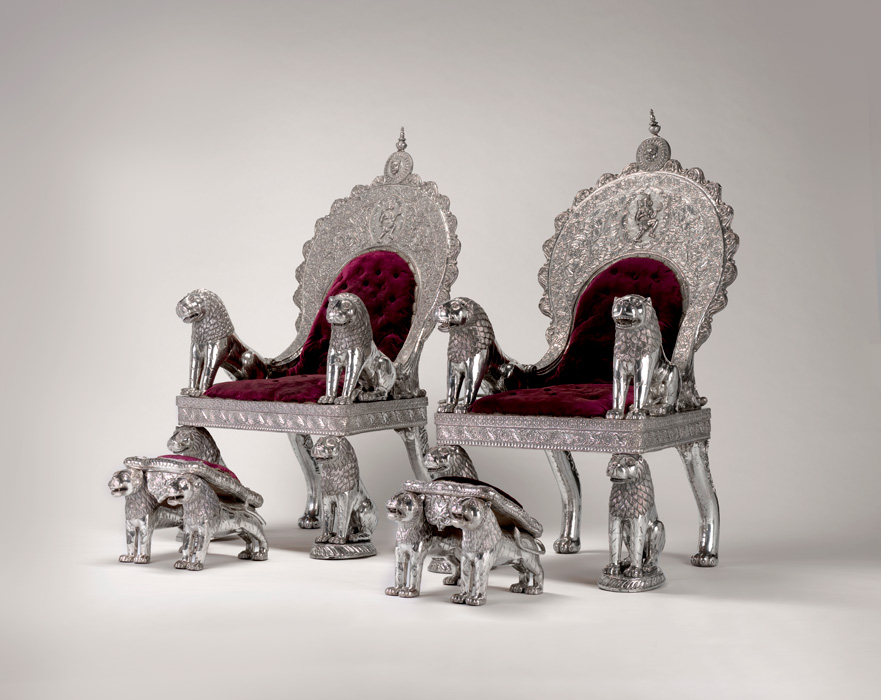 These Indian “Royal Thrones and Foot Rests,” acquired by the Nelson-Atkins in 2013, have been returned to their original splendor thanks to a major conservation project. (Nelson-Atkins Museum of Art)

“Silver Splendor” Will Feature 2013 Acquisition of Royal Thrones and Other Recently Conserved Items Formerly in the Collection of the Maharawal of Dungarpur, India

Among the many exhibitions upended by the pandemic, a stellar show of recently conserved objects in the collection of The Nelson-Atkins Museum of Art was put on hold when the museum closed in March 2020. “Silver Splendor: Conserving the Royal Thrones of Dungarpur, India,” featuring a 2013 acquisition formerly in the collection of the Maharawal of Dungarpur, a kingdom in southwestern Rajasthan, is expected to go on view this year.

In addition to two thrones, the acquisition includes two footstools, an umbrella (chhatri) and a fly-whisk (chauri). Ten works on paper, also of Indian origin and acquired from a variety of sources, will be presented as well, but the primary focus is on the royal items and how they were conserved after their purchase eight years ago.

The chairs are dated 1911 and were likely commissioned by the Maharawal or King of Dungarpur for the Delhi Durbar, a gathering marking the succession of an Emperor or Empress of India the same year. The coronation of George V took place in June 1911, and it was decreed that he would also be crowned Emperor of India in December that year. Royals from all over India attended the Durbar, many arriving with furniture and artwork created for this major celebration.

The thrones and their accompanying footstools were constructed with wood frameworks wrapped with silver. Their decoration consists of Hindu gods, peacocks, gazelles, petals and leaves as well as the repeated use of lions as armrests and legs and as supports for the footstools. The thrones’ seats and backrests are upholstered in velvet. The horse or oxtail hair of the fly-whisk is attached to a gilt silver handle, while the umbrella’s silk fabric is embellished with intricate silver embroidery. Like the thrones, the latter items symbolize authority and are historically associated with Indian royalty.

When the group of objects arrived at the Nelson-Atkins, their condition was carefully assessed. The fly-whisk was probably in the best state of preservation, having either been more carefully stored or perhaps used less than the other items. The cushions of the thrones needed to be reupholstered, and the silver of the chairs and footstools was quite tarnished.

Stephanie Spence, the museum’s objects conservation fellow and part of the restoration team for the thrones acquisition, explained that polishing the silver involved using a special slurry of finely ground chalk and distilled water applied with cotton swabs. The slightly gritty concoction was then rubbed gently on the silver and wiped off. The process followed many discussions about the desired results between Spence and Kimberly Masteller, the museum’s curator of Southeast Asian Art. The objective was to remove the tarnish but maintain a degree of patina to avoid a “looks-like-new” makeover. The cushions were reupholstered over the old fabric, adhering to the important philosophy of only doing any work that could be reversed.

The objective was to remove the tarnish but maintain a degree of patina to avoid a “looks-like-new” makeover.

But it was the umbrella which presented the biggest challenge to the conservation department. The silk fabric was brittle and so shattered in areas that it was beyond repair. The silver embroidery was incredibly complex, with great diversity in both types of stitches and kinds of threads utilized. Spence and her colleagues spent a year contacting other conservators and textile experts to discuss what might be done. Ultimately, it was decided to work with Lesage, a Parisian firm celebrated for their embroidery. The work would be executed in their workshop in Chennai, India.

“It was exciting to work in France and India and to discover ways to address all the challenges,” Spence said. Since it was not possible for the umbrella to travel overseas due to climate control and security concerns, Spence had to figure out a way to convey the complicated instructions of how to replicate the stitchery to seamstresses who did not speak English and were located halfway around the world.

After studying the embroidery under a microscope, Spence spent weeks creating an enlarged but to-scale map with a program in Photoshop. Contrasting colors indicated different types of stitches or thread. A myriad of silver thread had been used — some thinner than a single strand of hair, others were flattened, even hexagonal or spiral-shaped — and each had its own symbol in the legend she provided. Again, the issue of tarnish needed to be addressed. Since it was inevitable that the silver threads would discolor, it was decided to pre-tarnish all the thread to attain a more consistent overall hue and avert a too shiny outcome.

Spence describes a conservator’s job as an amalgamation of science, art history and studio art. The thrones project “has required the work of many conservators and outside firms over the course of a span of five years, and it has been very rewarding to be a part of a conservation treatment of this size and scope,” she said.

The upcoming exhibit follows a 2018 display of the polished and conserved thrones and footstools. The new iteration will include the umbrella, the most complicated and time-consuming element of the conservation project.