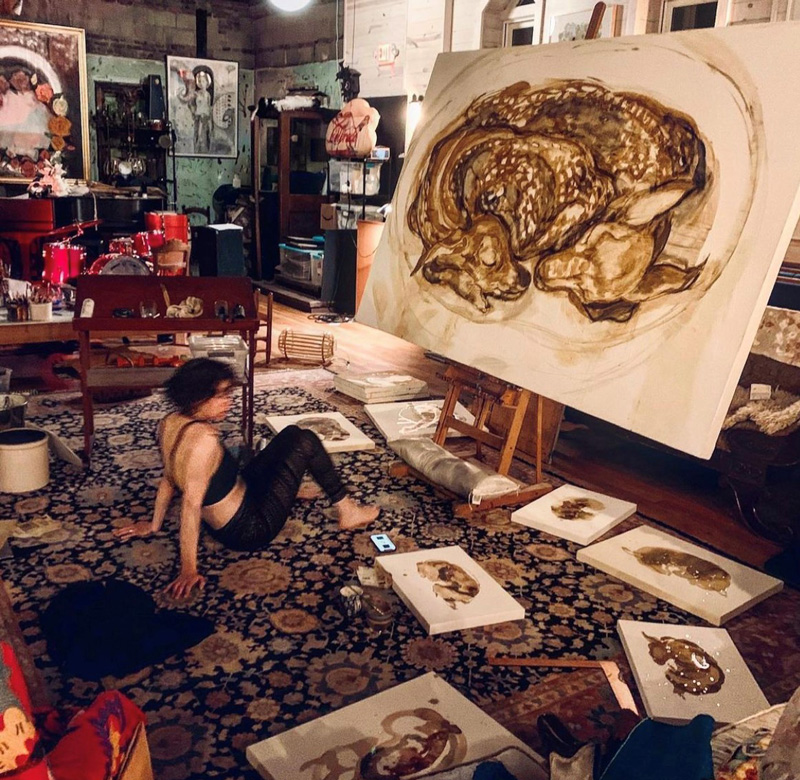 “It can be about anything. Birth, death, war . . .” When I met with Peregrine Honig at her studio to look at her body of work and the milestone pieces in her career, I noticed an unusual sight: a pair of taxidermied, fetal twin fawns, curled tightly around one another. The fawns are displayed in a custom-made glass cloche and hand-carved wooden pedestal.

Are they real? Honig recounts the story. After purchasing the taxidermied fawns from a toy and science store, the sculpture was first exhibited in 2008. Recurrence of the ovoid form of the twin fawns’ case and pale blue green of the pedestal are found in many of her prints, drawings and paintings that surrounded us. A large painting gives these fawns a monumental presence and weight, while smaller painted studies and a recent lithograph published by Black Rock Editions capture the more delicate side of the subject. Over and over, we discovered variations on these visual motifs.

Honig presents the delicate fawns whose seemingly peaceful slumber belies their reality of dying in their mother’s womb; the latter had been hit by a car and killed. These contrasts of seeming innocence and vulnerability undercut with darker truths or the seedy underbelly of the stories and myths which surround us repeat throughout the artist’s career and throughout the new exhibition of her work opening in June at the Albrecht-Kemper Museum of Art.

The theme of innocence lost continues through Honig’s other works. The Father Gander print series portrays tragic figures of reimagined fairy tales, such as a drug-addled Snow White, enclosed in a pale, delicate oval of forest. Ovubet: 26 Girls with Sweet Centers, a series of hand-colored etchings on white paper lace doilies, first gained Honig national attention in 1999. These works confront the viewer with sometimes uncomfortable truths about the experiences that surround female sexuality, depicting delicately drawn girls in various states of nudity.

Peregrine Honig at the Albrecht-Kemper Museum is the artist’s first solo museum exhibition after 17 group exhibitions and having her work in the permanent collection of institutions such as the Yale University Art Museum, The Milwaukee Art Museum, and the National Museum of Women in the Arts. At age 22, she became the youngest living artist to have artwork acquired by the Whitney Museum of American Art. This exhibition will feature many of the prints Honig has produced in collaboration with Landfall Press over more than 20 years, including Ovubet and Pyre, a poignant reminder of the working conditions and the lives lost in the Triangle Shirtwaist Factory Fire of 1911. Other works explore the connections between modern selfie culture and historical models of portraiture and the male gaze.

Peregrine Honig will be on view at the Albrecht-Kemper Museum of Art in St. Joseph, Missouri from June 20 through September 12, 2021.