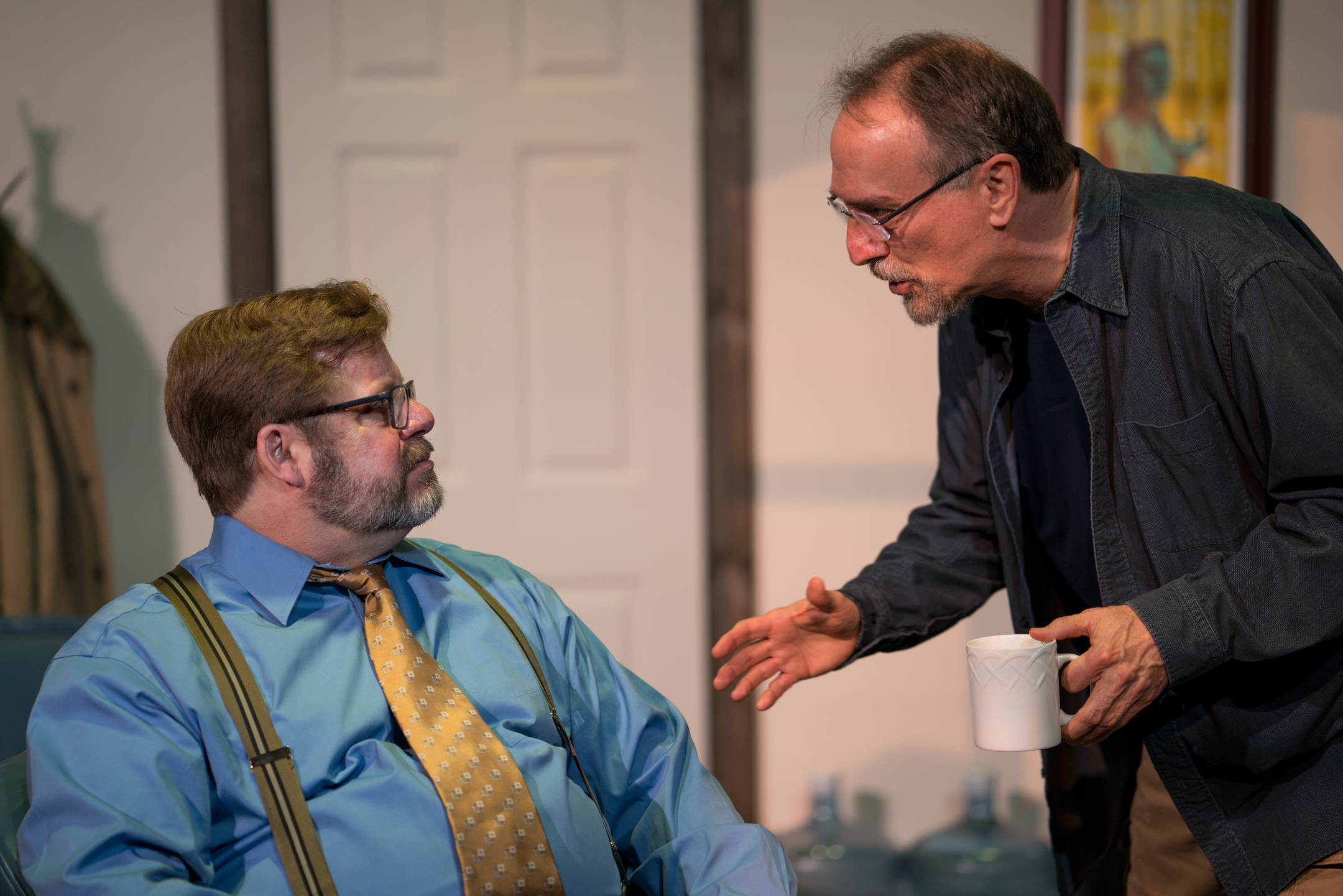 Two of Kansas City’s best actors turn a new play by Ron Simonian into a memorable satire that engages viewers with bite, humor and gray matter.

The world premiere of Simonian’s “Trigger Happy” showcases smart, nuanced performances by Scott Cordes and Mark Robbins. It also reflects The Living Room’s commitment to developing new work and getting it on stage.

Simonian, whose plays have been seen at the Unicorn and in independent productions for a couple of decades, has always exhibited two main strengths — rhythmic dialogue and the use of misdirection to lead viewers with a strong dramatic narrative only to surprise them with a plot reversal. Those virtues are on display in “Trigger Happy,” his two-character piece about academic politics, political correctness and “micro-aggression.”

Director Rusty Sneary is smart enough to let Robbins and Cordes follow their instincts, but he stages the play, which unfolds in a university office, with creative touches and varied blocking that continually hold our interest.

Cordes plays Frank, a department head, and Robbins plays Jerry, a professor who is in hot water for insulting one of his students. A young Islamic woman who was offended by a stuffed Santa in Jerry’s office has taken her complaint to the chancellor. Although Santa is an innocuous symbol used ubiquitously to sell everything from soft drinks to vacuum cleaners, the young woman sees it as a “religious” icon offensive to her non-Christian beliefs. To make matters worse, other students have come forward to complain about Jerry’s classroom demeanor, his assignments and his failure to include “trigger warnings” in his syllabus.

The tricky part: Frank and Jerry are best friends. They share fond memories of ballgames in childhood and spirited, alcohol-fueled debates in college. Frank is a liberal and Jerry a libertarian, but their divergent political views never affected their friendship. Until now.

Jerry refuses to take the student complaints seriously while Frank tries to make him see that we’re in a new era with a new set of rules. Casual sexism is no longer acceptable. Neither are homophobic jokes. Xenophobia is inadmissible. But Jerry, adamant that the teacher should be in charge of the classroom, can’t or won’t recognize that the students have taken over. In Jerry’s view that’s tantamount to inmates running the asylum.

Simonian uses the premise to make valid points on both sides of the argument. On one level, the play is a dialectic and at times Simonian bends the plot line in order to make room for the philosophical debate. Even so, the pacing and the performances smooth over any moments when the writing seems manipulative.

Cordes and Robbins play it straight, which makes Simonian’s humor all the more piercing. Cordes captures Frank’s anguish as he tries to help a best friend who won’t be helped. And Robbins is effective as a guy who can’t bend. Despite the humor and satirical touches (such as Frank assigning students to read the lurid “Flowers in the Attic”), the show contains a surprising degree of poignancy.

The simple but effective design elements serve the material well. Sneary chose to insert an intermission in a play that would run less than 90 minutes if performed without interruption. By so doing, he slows the momentum.

Simonian used to perceived as the guy who wrote about assassins, hookers and drug dealers. That view, although understandable, failed to reflect the diversity of his plays or his ability to write odd, memorable characters. “Trigger Happy” shows him to be formidable social critic as well as an able dramatist, even as he takes a look at the murky ethics of academia.