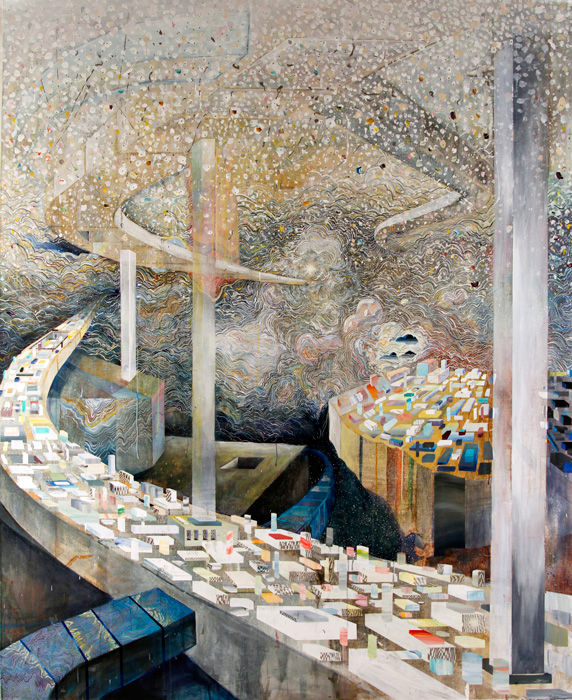 Ricky Allman is best known for explosive post-apocalyptic paintings inspired by his rejection of his Mormon upbringing.  In his new works, the Kansas City artist continues to move away from the dire visions of his past to guardedly optimistic predictions for the future.

“I don’t believe in the apocalypse of humanity; despite all our problems, we’re definitely going to figure out our way,” Allman says.

Allman remains attached to his signature motifs of architecture, the mountains of his native Utah, and airy, confetti-like exhalations, but he now places them at the service of futuristic imaginings. Created by sanding down and adding to canvases dating to his student days at the Rhode Island School of Design, his depictions of floating cities along looping skyways evoke space stations or what Allman calls “science fiction solutions to global warming.”

“None of us knows what the future is like. Here’s a potential scenario. Like a dream it never materializes. Things are coming together or falling apart, you can’t tell which way it’s going to tip.”

The human figure—fragmented, robotic, entwined with technology—also plays a role in these works.  The pair portrayed in Surprise from Behind suggests a boss and his secretary at one with their galactic setting and the technology that surrounds them.

“I don’t see this great battle between humanity versus technology,” Allman says. “I see the two becoming a kind of fusion. I’m looking at the ingenuity of humans, our ability to adapt and get ourselves out of situations we got ourselves in to.”

Allman, an associate professor of painting/drawing at UMKC and a 2011 Charlotte Street Foundation visual award fellow, has exhibited internationally over the past decade, including an appearance this past fall in the 1st Biennial of Asunción in Paraguay, where he created an installation.