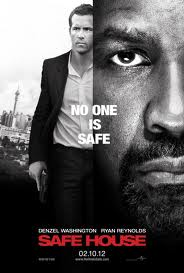 It is estimated that more than 55 percent of Americans feel that they are stuck in a dead-end job.  They go in every day, punch the virtual clock, sit in their cubes, perform mundane tasks, go home, and repeat.  And that is certainly true in Matt Weston’s (played by Ryan Reynolds) case. Except he has a super hot girlfriend.  A girlfriend who he has to lie to because he is a CIA agent in Cape Town, South Africa.

Matt’s job is at a CIA safe house where he monitors a few rooms in a apartment building while waiting for his big promotion. A safe house is a place where CIA agents can go if they are in tight situation and need a safe place.  Matt has been stuck at his safe house for 12 months without any sign of a promotion or houseguests.

Matt is in constant contact with his Director at the CIA, David Barlow (played by Brendan Gleeson) telling him how he is ready to move up in the Agency and is ready to take on more responsibility.  Be careful what you wish for, Matt.

Meanwhile, rogue CIA agent, Tobin Frost (played by Denzel Washington), is making a deal with his contact at MI6. He is acquiring a microchip that contains enough information on bad CIA agents to put them away for a long time. Think of it as Wikileaks times 1,000. The deal goes bad and Tobin is racing through the streets of Cape Town looking for shelter. He has no choice but to give himself up to the American Consulate.

From here we are seeing a pretty standard rogue agent film. Little Guy vs. Big Guy. Tobin is transported to Matt’s Safe House where agents take it upon themselves to water board Tobin, not necessarily for information but for revenge. Tobin has made several enemies over the years.  In fact, he used to be one of the good guys.  He has been so deep under cover he has seen the dark side of the CIA and the information on his microchip is his revenge on the system.

While Tobin is being tortured a small army attacks the safe house killing everyone but Tobin and Matt who make it out via a standard high-speed chase through the streets of Cape Town.

Once they are somewhat safe the tension between the veteran and the rookie rises. Tobin, with his years of interrogation and field experience, starts Matt on a road of self-doubt, questioning his real motives.

All along the CIA is trying to coach Matt from D.C. via his cell phone. They order him to pick up of package at a busy soccer stadium on a Friday night.  You would think that the CIA would have a better location to make a pick-up. While at the stadium, Tobin breaks away from Matt while several shots are exchanged between Matt and the stadium police.  Now Matt is looking like the bad guy and he lost his houseguest.  Tobin whispers, “I only kill professionals” when he has a gun pointed to Matt’s head. Ouch.

Matt has no other option but to hunt Tobin down to bring him to justice and prove his own innocence. He soon catches up with his houseguest.  It’s not entirely clear how Matt tracks down his guest but that’s OK, because there is enough gunfire and killings to make the audience forget why one is chasing another in the first place.

The pair eventually buddies up and makes it to one other safe house where the entire “web of CIA lies” unravels for a kill-em-all ending.

Should you see this movie?  You might have seen it already (i.e. “Enemy of the State,” “Green Zone,” any of the “Bourne” films) where there is a plausible story line with a) one high-speed chase, b) lots of gun fire, c) at least one explosion, d) a mini love story. Washington and Reynolds do have an on screen connection while there is enough tension between them to keep you interested in what is going to happen next.