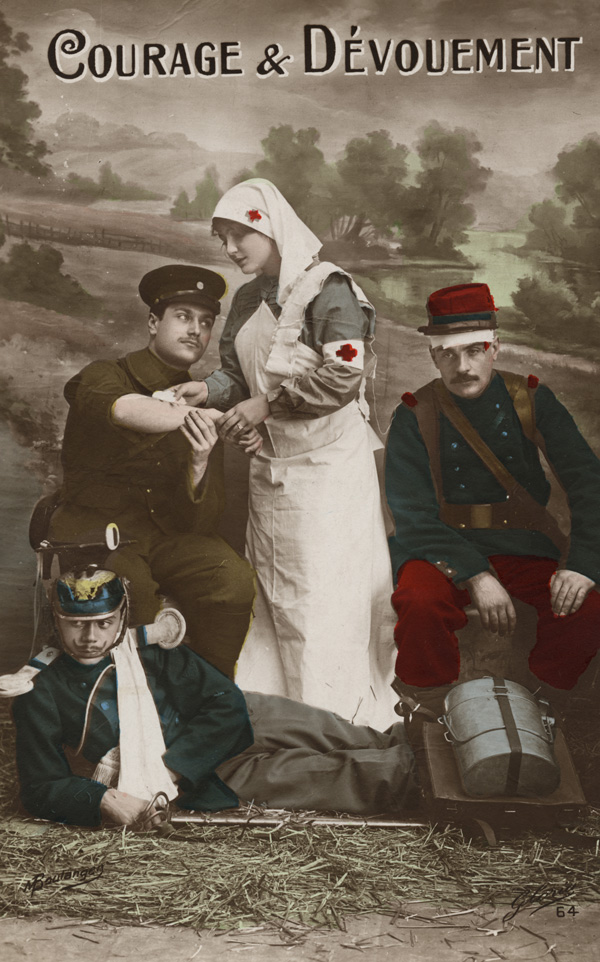 Chanel’s claim about fashion’s broad reach comes to life in a fascinating exhibit at The National WWI Museum and Memorial. Offering a look at daily life through the changing styles of wartime, “Silk and Steel: French Fashion, Women and WWI” explores what French women contributed to the war effort and how it affected their lives and fashion.

Near the entrance to the exhibition, a Madeleine Vionnet design of black silk satin and tulle, encrusted with rhinestones and beads, attests to the persistence of French elegance. Yet, as more women began to work outside the home and take over jobs previously filled by men, a newfound sense of utilitarianism asserted itself in their choice of clothes. Coveralls or overalls, inspired by American workers, entered the French fashion vocabulary.

Some French women used a bit of lace or jewelry to add a feminine touch to their otherwise drab work clothes. Frankie Shouse, a Kansas City nurse who served overseas, purchased a variety of lace items while in France; one collar, on loan from the collection of the Kansas City Museum, is reminiscent of the way Ruth Bader Ginsburg enlivened her Supreme Court Justice robes.

France was determined to keep its major industry of providing fashion to the world viable during the war. German occupation in the north had made the wool manufactured there impossible to obtain, so other fabrics, such as jersey or new silk blends, were used instead. Wool shortages also called for accommodations in how much fabric could be used in designs, and even before war was declared in 1914, women’s fashion had started to become less cumbersome.

Moreover, many dyes of German origin ceased to be available, and as a result, the color palette for clothing changed. Before 1917, brighter colors were marketed to Americans, who were in a less somber state of mind than those already at war.

Much of the clothing displayed in the exhibition was purchased by Americans or made to order. American servicemen would often buy items for their loved ones back home. Department stores such as Galleries Lafayette remained open during the war, providing uniforms and other military necessities to their clientele. The 70,000 French women who volunteered as nurses were required to procure their own uniforms, using a stipend of 100 francs.

Countering the narrative of uniforms and hardship are displays of elegant dresses created just before or after the war. Viewers will recognize names such as Chanel or Lanvin, but designers less well known to Americans — Callot Sœurs, Madeleine Vionnet, House of Worth, Maison Complier & Rondeau — are also included. Several of these fashions were loaned by the Preservation Society of Newport County, Newport, Rhode Island.

Organized by Doran Cart, senior curator at the National WWI Museum and Memorial, “Silk and Steel” takes its framework and research from the 2019 exhibition, “French Fashion, Women, and the First World War,” at the Bard Graduate Center Gallery in New York. (Both that show and an earlier version, “Mode & Femmes 14-18” at the Bibliothèque Forney in Paris, France, were organized by Maude Bass-Krueger and Sophie Kurkdjian.)

For “Silk and Steel,” Cart utilized the wall texts and some images from the Bard Graduate Center Gallery, but basically created a new version of the exhibit, drawing three-quarters of the items from the museum’s permanent collection. Many of the loans came from Midwestern collections: the University of Missouri Historic Costume and Textile Collection; the Kansas State Historical Society, Topeka; the Western Reserve Historical Society, Cleveland; and the Kansas City Museum.

Since opening last September, “Silk and Steel” has also stood as a triumph of will over the pandemic, which, Cart said, caused a few ripples in his organization of the show. The possibility of borrowing items from France evaporated once the lockdowns began. Local loans were picked up personally when shipping companies were temporarily shuttered. Luckily, the Plexiglas needed for the custom-made cases had been ordered before a huge demand for the material to fabricate barriers caused shortages.