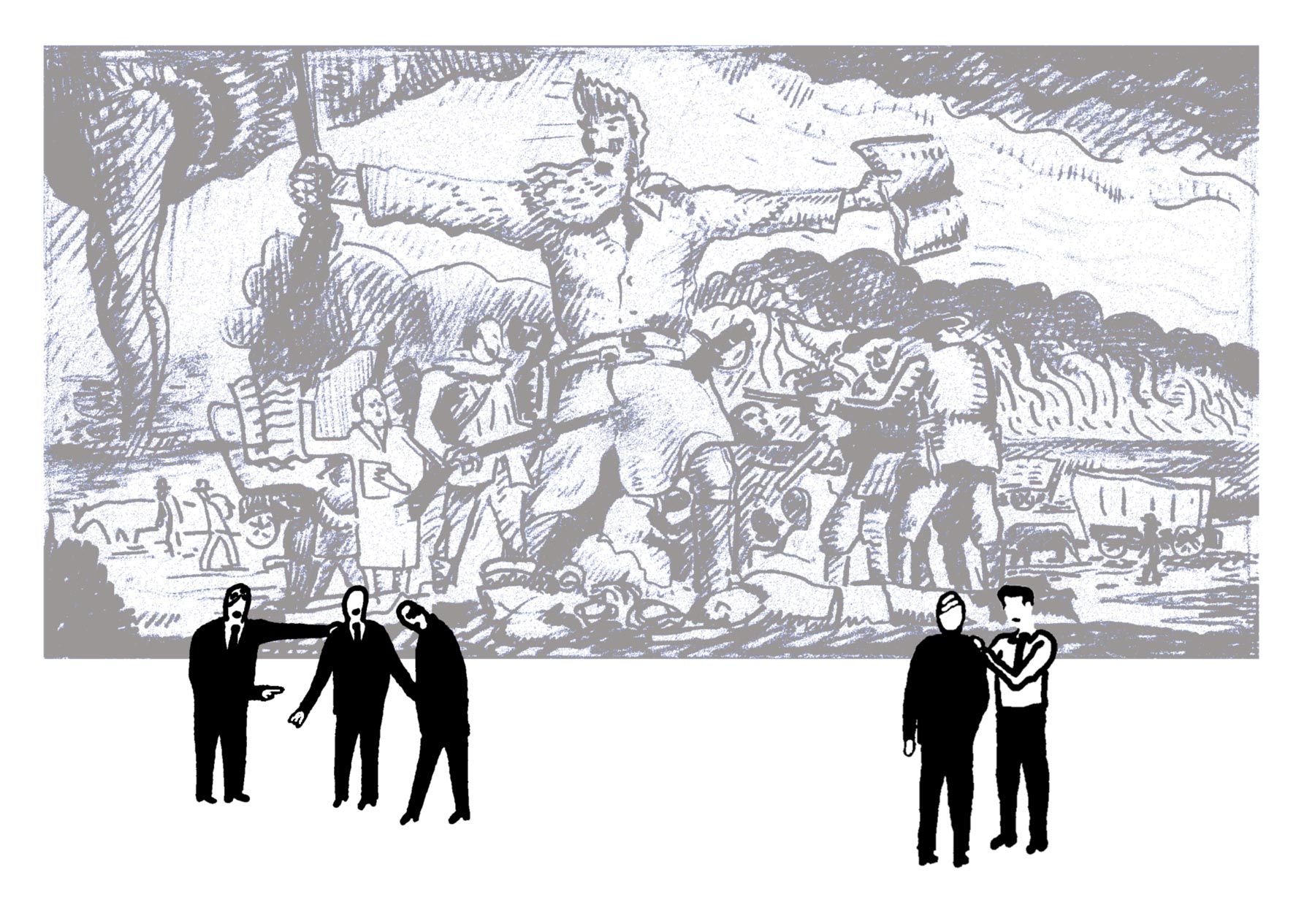 Legislators converse in front of Tragic Prelude, a mural panel by John Steuart Curry in the Kansas state legislature rotunda, in this illustration by Jason Needham.

The mid-1930s represents an odd historical peak in public support for arts in Missouri and Kansas; each of these legislatures commissioned elaborate murals for their respective capitol buildings. The renowned home state artists, Thomas Hart Benton in Missouri and John Steuart Curry in Kansas, were paid substantial fees from state funds for the murals, which are jewels in the crowns of our two statehouses. School children today, on the traditional capitol field trip, are just as awestruck and slightly frightened by these depictions as I remember being as a child.

Benton and Curry were the most respected Regionalist artists of the American Great Depression, each having studied in Paris and at the Art Institute of Chicago, and each at the peak of his career. While the timing of their commissions coincided with the Works Progress Administration (WPA) program, which employed struggling artists to adorn federal buildings, no New Deal money was involved here.

What was it about the era (1933-1937) that made these two state legislatures spend precious public money on what, by the standards of their current day peers, would be considered frivolous and impractical? President Franklin D. Roosevelt had convinced the people of our country that the only thing they had to fear was fear itself. The New Deal was beginning to work and unemployment was under 10 percent. Things were looking up. Never mind those rumblings from Europe; FDR had just signed the third of four Neutrality Treaties.

Consistent with politics, the culture of that time reflected almost a collective state of denial. Radios offered up post-depression Freudianisms such as Pennies from Heaven, Whistle While You Work and It’s Nice Work If You Can Get It. Gone with the Wind and The Grapes of Wrath were new stories of bygone days, while Broadway’s The Wizard of Oz revealed that the yellow brick road led right back to Kansas! The St. Louis Blues era was over and Kansas City jazz was in its heyday.

Perhaps, rather than denial, it was just state pride and having native sons with the ideal skills. But I prefer to believe that each of these legislatures saw a need for beautification of the public edifices over which they had guardianship, that they saw the power of art to portray and preserve important lessons of history, that they knew people who have endured trauma such as the Great Depression can experience healing through art, and that whatever the future brought, the quality of life of their constituents who  experienced these murals would be forever improved.

Benton was given complete reign over his charge to depict “A social history of the State of Missouri.”  His narrative tells the full story and myths of the ordinary Missourians, not omitting slavery or even Pendergast. A steam engine appears to charge right off the wall and the bulging muscles of farm workers and livestock alike demonstrate Benton’s mastery of realism. A visit to The House Lounge to see this magnificent mural is a fitting reward for making the trip to Jefferson City.

As for poor John Steuart Curry, he unfortunately met up with a devil who so many creators of public art before and since him have known. From the beginning, the Kansas state legislature let fly its criticism and balked at removing marble panels to accommodate the final eight murals in the rotunda. They felt that the panel, “Tragic Prelude,” which depicts the historical uprising led by abolitionist preacher John Brown, was not an appropriate representation of the state’s stand against slavery. A woman’s skirt was too short, the Hereford bull too red, and the tornadoes were “menacing.”  If this was realism, they were agin’ it!  As a result, Curry refused to sign or finish the job.

More than 40 years later, in 1978, another artist was commissioned to complete the murals using Curry’s original sketches. Ironically, another 40 years will have passed when Governor Brownback steps down in 2018.  Perhaps then the arts will be returned to the state’s budget.

Curry considered the statehouse murals his greatest work, and they more than warrant a visit to the beautifully renovated capitol in Topeka.

As Kansans and Missourians we can be proud of our respective state capitol murals. They’re worthy of a family field trip!  While you’re there, drop by the offices of your state representative and senator. Congratulate them on being able to work in the presence of such splendid art, and request that they fully fund their state arts council so that others can be as fortunate in the years to come. Oh yes, don’t forget to thank them for considering your opinion.

Susan Schmelzer is a community activist who has served in leadership roles on several boards, currently including the Executive Committee of Missourians Citizens for the Arts, which advocates for state arts funding. Her devotion to the arts began as a vocal music major, while her professional background spans careers in higher education and nonprofit consulting.