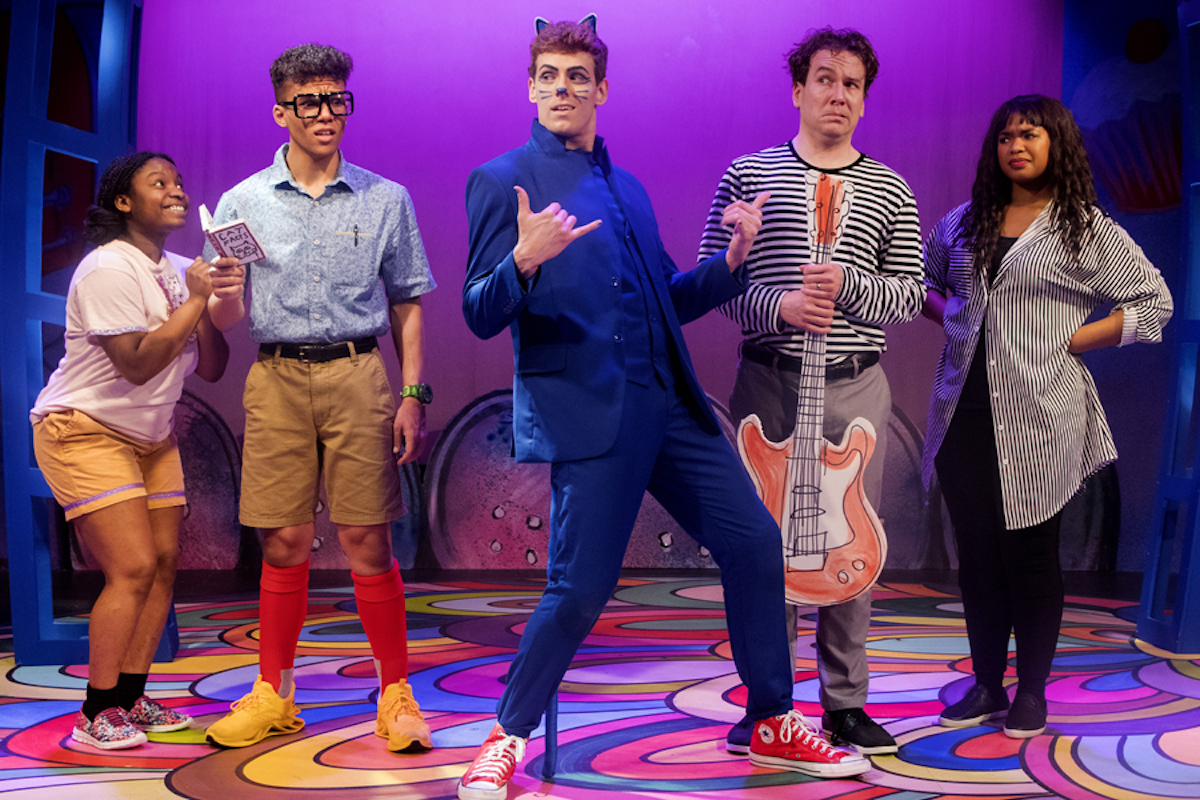 The Coterie Theatre has carved out an impressive niche, consistently producing work that can genuinely be described as “fun for all ages”—equally appealing to children, tweens, even teens, while also being engaging enough to keep parents entertained. Their latest musical, “Pete the Cat,” definitely skews significantly younger than other recent shows but is still fully of the same quality audiences have come to expect. This show is recommended for families with children ages three and up, but young viewers will likely fall out of the target audience well before they reach double digits. Still, thanks largely to Coterie’s pool of top-notch talent and impressive production value, accompanying adults should also have a thoroughly enjoyable time.

“Pete the Cat” is based on Kimberly and James Dean’s series of picture books by the same name. The musical sees the titular character—a guitar-playing, sneaker-wearing cat played by Noah Lindquist—picked up off the streets and sent to live with the Biddle family in an attempt to teach the cool cat some manners. Pete shows up reluctantly to serve out his sentence but (surprise, surprise) ends up developing an affinity for the humans.

The rest of the small cast rotates between a number of roles. T. Eric Morris and Bri Woods primarily play the Biddle parents, with Amari Lewis (recently seen shining in Coterie’s “The SpongeBob Musical” along with Lindquist) as Olive Biddle, their young daughter whose intense love for Pete is matched, tragically, only by the strength of her cat allergies. Lucas Lowry rounds out the immensely talented cast as her brother, Jimmy Biddle, whose excessively Type-A obsession with perfection makes him the perfect foil to the laid-back cat.

Director Heidi Van chooses to keep things simple, smartly allowing her exceptional cast to be the focus throughout. Along with a few charming set pieces from Carlos Aceves, most of the scenes are set via Jarrett Bertoncin’s transformative lighting, which transports the audience from the ocean to outer space and everywhere in between.

For 55 minutes, the cast maintains remarkable energy, holding the attention of their young, rapt audience and hitting every note of the show’s groovy 60s-vibes-inspired soundtrack. (“Cat people” in the audience should be aware that you might very well find yourself singing especially catchy selections from the show to your pets for weeks afterward.)

“Pete the Cat” wouldn’t have much to appeal to adults on their own, but for those with young kids, it’s a great option for an evening (or afternoon, or morning, with matinees throughout the week) out. This character has a devoted following of young readers and based on the cheers, clapping, and excited waving from the audience, the show lives up to their expectations while giving adults plenty to enjoy.