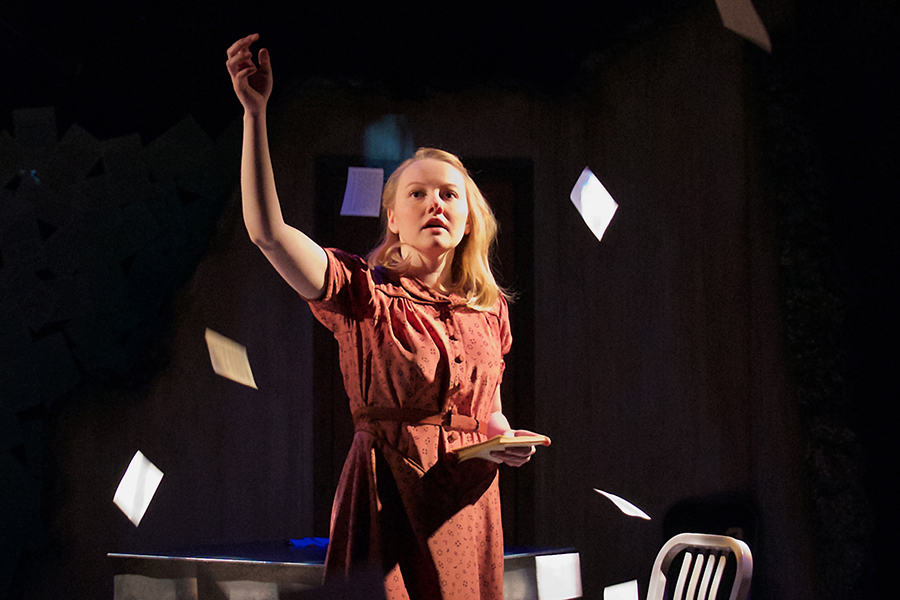 The Coterie’s production of “The White Rose: We Defied Hitler” by David Meyers hums with relevance.

The one-act drama depicting the interrogation of Sophie Scholl, a young resister in Nazi Germany who was tried for treason and executed for distributing anti-Hitler leaflets, will almost certainly bring to mind young people in the here and now. Climate activist Greta Thunberg and the gun-control advocates who emerged from Stoneman Douglas High School in Parkland, Fla., after a mass shooter killed 17 of their classmates are, like Scholl, taking matters into their own hands as adults in power deny reality.

Scholl was a student at the University of Munich when she joined the White Rose, a non-violent group opposed to the Nazis and Hitler’s militarism co-founded by Sophie’s brother Hans. When asked by her interrogator late in the play why she and her friends took it upon themselves to oppose the Nazi machine, she replies simply: “Because someone had to. It was left to us — the children.”

This play, apparently adapted for young audiences from an earlier drama Meyer wrote about Scholl called “We Will Not Be Silent,” is set entirely in the prison cell where Sophie is subjected to a relentless interrogation by an officer named Kurt Grunwald. Grunwald initially takes pains to impress on Sophie that he’s not really a bad guy — “I’m not a monster,” he says more than once — and that he’s not a member of the Nazi party. But as the interrogation continues, he reveals both a subservience to the fascist power structure and the layers of denial required of a “regular” German to function within a one-party system that holds power by crushing dissent.

Robert Gibby Brand plays Grunwald with seamless skill, maintaining a balance between bullying, sadistic tactics and empathetic warmth as he tries to cajole Sophie into signing a confession. Before all is said and done, he manipulates the bureaucracy as well as Sophie in a desperate effort to to save her life. Clearly, Grunwald embodies a tragic dimension, having seen his own son sacrificed to the Nazi war machine. On the other hand, we are left to deal with his actions. Somebody can deny being a “monster” all day, but if he he serves the will of a monstrous regime, how can his claim be credible?

Morgan Lynn Sterrett delivers an effective performance as Sophie, despite a few stumbling blocks in the play itself. We watch Sophie initially deny all culpability in the White Rose’s leaflet-distributing dissent and gradually transition to taking responsibility for her actions and accepting her fate. Sterrett’s performance acquires authority and ultimately becomes a poignant expression of idealism. In the final moments, after Sophie’s fate has been decided, she throws handfuls of leaflets into the audience — a last gesture that says: “I matter.”

Hans, who Grunwald tells Sophie is being held in another cell, appears to Sophie more than once in a feverish dream. Jordan Luty delivers an unfussy, crystal clear performance as Sophie’s idealistic brother. The scenes between Hans and Sophie are genuinely touching.

All in all, co-directors Jeff Church and Markus Potter capture the tragic essence of this material, and they had help from a skilled design team. The show is a co-production with UMKC Theatre and and takes full advantage of the school’s resources and talent. Leo Barker’s set depicts a cut-away version of the prison cell backed by a long wall festooned with White Rose leaflets. Zan de Spelder’s lighting, Tom Mardike’s sound design and Selena Gonzales-Lopez’s projections add to the ominous, claustrophobic atmosphere. Lauren Long’s costumes are simple but effective, as are the props and set dressing by Samuel Klass.

In a post-performance Q&A session following the Saturday matinee attended by a couple of Girl Scout troops, more than one adult viewer commented on what they saw as parallels between the historical play and the current political atmosphere in this country.

On the way out, I picked up one of the flyers Sophie tossed into the audience. It reads in part: “The name of Germany is dishonored for all time if German youth does not finally rise up, take revenge, and atone, smashing its tormentors, and setting up a new Europe of the spirit.”

Those simple, bold thoughts could apply to every generation in any country in any era. And that, of course, is the point.