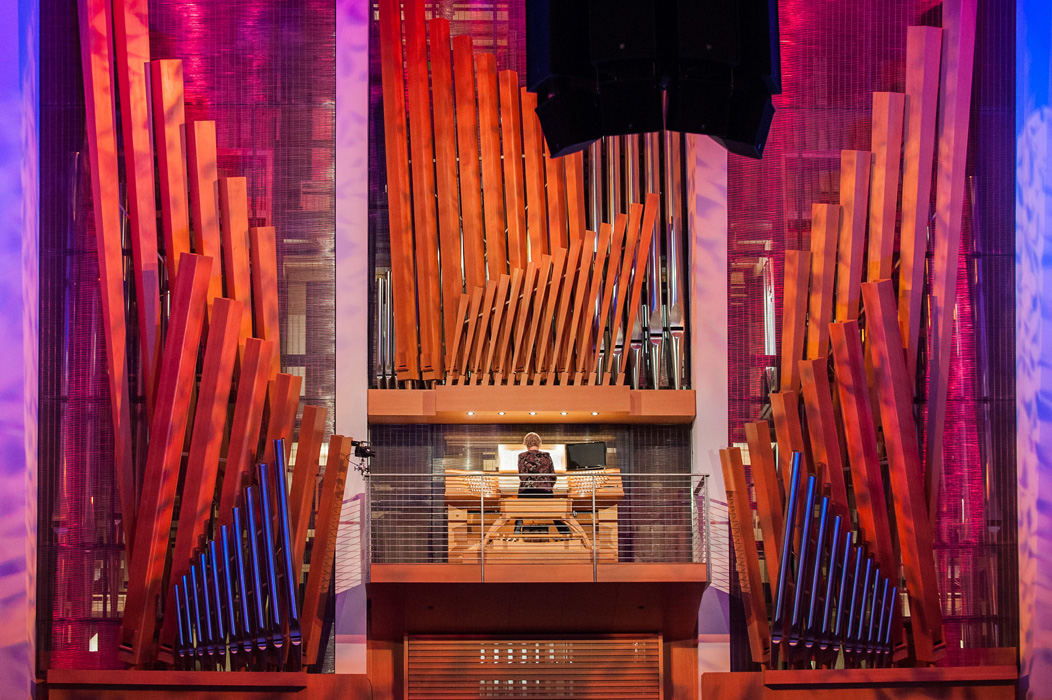 Grammy-nominated organist Jan Kraybill performs on the Julia Irene Kauffman Casavant Organ, Opus 3875. Some of Kraybill’s recent performances on the pipe organ are featured in a 2020 Spotify playlist and in an educational YouTube video series. (photo by Nicki Griffith)

How do you connect with audiences during an unwelcome intermission in performances? The Kauffman Center has been finding unique ways to do just that. Recent offerings include curated playlists on Spotify, puppet-hosted videos filled with theater lore and unique, take-home menus from The Dining Experience. It is easy to connect to the Center’s new offerings by following @kauffmancenter on Facebook, Twitter and Instagram or by exploring kauffmancenter.org.

In the fall of 2020, 300 people shared their photos of the Kauffman Center on social media using the hashtag #KCFavePhoto. In October, Kauffman Center Trivia Night brought more than 40 trivia fans online for a goodhearted competition, with questions about the performing arts and Kansas City. Early November saw a collaboration with local painter Vania Soto and the creation of a video about Día de los Muertos, or Day of the Dead. Soto set up her easel in the Center’s Brandmeyer Great Hall and spoke about the meaning of the Latin American holiday while painting a portrait of a woman in traditional Day of the Dead makeup. The video was released to social media and YouTube Nov. 2, during the traditional Day of the Dead. Throughout autumn and the holiday season, uniquely designed menus from the Kauffman Center’s The Dining Experience: At Home reached beyond the restaurant’s traditional setting, meeting the demand for gourmet take-out cuisine.

In September 2020, the Kauffman Center launched seven “Best of” Spotify playlists comprised of artists and musical works that have been featured on the Center’s stages. These marvelous additions to stay-at-home evenings or walks in the park are presented in partnership with Premier Partner Saint Luke’s Health System, PNC Bank, Mercedes-Benz of Kansas City and Aristocrat Motors. One playlist celebrates notable performances from the Kauffman Center Presents series, with recordings by artists like Aretha Franklin and Willie Nelson. Another features classic chamber music and symphonic recordings, ranging from a Kansas City Symphony performance of Holst’s The Planets to Yo-Yo Ma’s rendering of Brahms’ “Lullaby.” There are playlists for lovers of jazz, ballet, opera and musical theater, as well as an exciting “Best of: Pipe Organ” list with performances by the Kauffman Center’s organ conservator, Jan Kraybill, on the Julia Irene Kauffman Casavant Organ, Opus 3875. You can find all seven playlists on the Kauffman Center’s Spotify page.

In addition to her new place on Spotify, Kraybill now has a six-part performance video series on the Kauffman Center’s YouTube Channel. Her music and commentary offer a great way to fall in love with the pipe organ and to get to know Kansas City’s world-class instrument. The Julia Irene Kauffman Casavant Organ, Opus 3875 has left its impression on scores of audiences in Helzberg Hall. The pipe organ video series invites you to see the instrument’s intricate craftsmanship and architectural presence while enjoying
its incomparable sound.

Since school groups could not attend student matinees in fall and winter 2020, the Kauffman Center delivered arts education virtually. Thousands of local teachers received the links to Jan Kraybill’s pipe organ videos and, thanks to the Marlese and Robert Gourley Children’s Fund, the Center enriched this unique learning resource with educational materials on the history of the instrument. Additional support for this project was provided by the Courtney S. Turner Trust Charitable Trust, John H. Mize & Bank of America, N.A., co-trustees, and the National Endowment for the Arts.

The Kauffman Center’s Spotlight on Youth program has transitioned one of its signature educational initiatives, Backstage Intensive, to a virtual space. The program, which introduces high school students to careers in theatre and arts administration, is now available through an online portal on the Center’s website. In addition to demonstrations about production elements like lighting and sound, educators also find worksheets and other learning materials to deepen understanding of performing arts professions. To coordinate access to the virtual Backstage Intensive, email opendoors@kauffmancenter.org. This initiative is presented by Cerner Charitable Foundation.

Smiling faces are at a premium these days and humor is in demand, so the Kauffman Center has partnered with local artists and organizations to create videos that make people smile. “While the Artists are Away, the Animals will Play” features some of the most naturally funny performers to grace the Center’s stages, including a cockatoo, a marine frog and a porcupine, all visiting from the Kansas City Zoo. Another video hoot is a series made in collaboration with Mesner Puppet Theater, called “Spooky Superstitions with Scary Mary Bumbershoot!” Launched for Halloween 2020, the vignettes feature a wild-eyed storyteller who explores the origins of theater lore. From the Muriel Kauffman Theatre and Helzberg Hall stages, Scary Mary, created and performed by Mike Horner, recounts the history of “Break a leg!” and much more. Premier Partner Saint Luke’s Health System supported this family-friendly adventure.

While audiences and artists have been missing from the halls, the creative pulse has continued to beat throughout recent months at the Kauffman Center. Stay up to date with the Center’s virtual and take-home offerings by following @kauffmancenter on Facebook, Instagram and Twitter, and by visiting kauffmancenter.org.