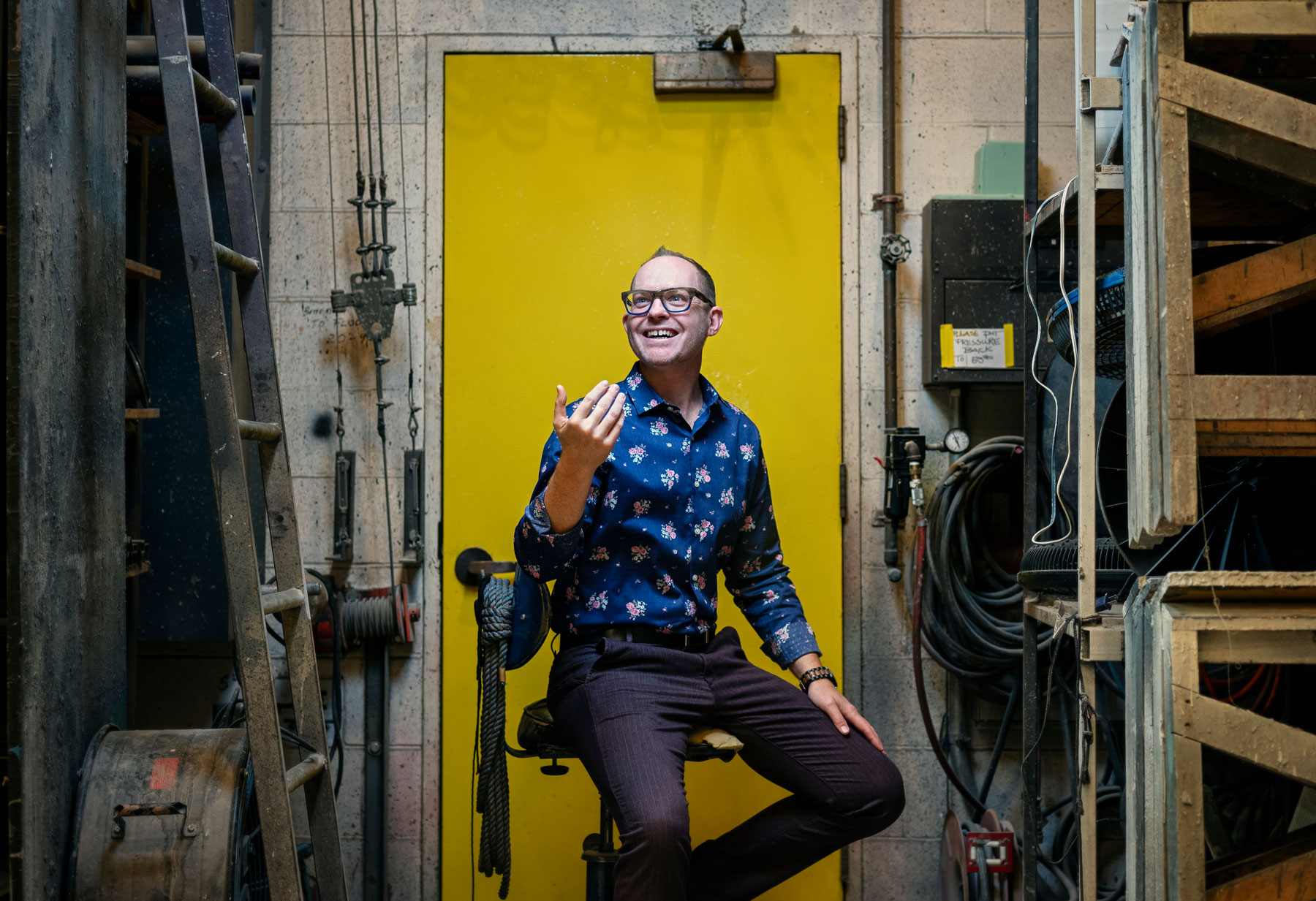 He was so new to the city and the job that he had barely had time to catch his breath. He talked a mile a minute and made no discernible effort to subdue his unbridled enthusiasm for his new job and the opportunities offered by the Rep and the city.

“This is my third trip to Kansas City, and now, on the third trip, I live here,” Carden said. “There’s a different dislocation of body and spirit. I landed on Monday and jumped into the office on Tuesday, and you’re catching me on my fourth day in Kansas City and my fourth day on the job . . . This is a record for the American theater, with the announcement of a new artistic director and the artistic director in the office two days later.”

Like his predecessor, Eric Rosen, Carden is a veteran of the Chicago theater scene who has worked as freelance director at theater companies around the country. Carden means to build on much of the work Rosen did here. Carden has seen shows directed by Rosen, and they’ve worked with some of the same artists, including director David Cromer, who Rosen invited to the Rep to stage “The Glass Menagerie” and later, “Our Town.”

At the time of this conversation, Carden’s home was a downtown apartment. His wife, Neysa Page-Lieberman, a Chicago-based art curator, educator and writer, expects to join Carden with their 7-year-old twin boys before the end of the year.

“They’re going to stay in Chicago through the fall,” he said. The ultimate plan is to choose a school for the boys and buy a house near that school. It’s gonna be a challenge being separated from them these few months.”

Carden hit the ground running, but in one way he caught a lucky break: The Rep’s 2019-20 season was set several months ago under the guidance of interim artistic director Jason Chanos. That leaves Carden to focus on the 2020-21 season. And it allows him to investigate and understand the community — or, to be precise — the communities that make up and contribute to the city’s cultural life.

One could argue that the exploration began with a visit to Char Bar, where he ordered up vegan barbecue.

“I had the Jackknife,” he said. “It’s smoked jackfruit instead of meat. The avocado and provolone offset the tangy barbecue sauce and the jalapeño kick. I haven’t eaten meat in 20 years, so I don’t even know what it tastes like anymore. So I don’t how it compares. But it was damn good. I’m going back.”

Cuisine is all well and good, but Carden holds a broader, enveloping concept of community. The first step was to introduce himself to the Rep audience by delivering curtain speeches at every performance of the first three shows of the season, which began in September with “Cat on a Hot Tin Roof.”

“I want to get in front of Kansas City Rep’s current audiences and say hello and introduce myself and give them a chance at intermission to ask questions,” he said.

“One of the things that really drew me to this position — and this speaks to Eric’s legacy — is the OriginKC New Works Festival. My career has been spent developing new work and commissioning new works for the stage. I’ve built programs at other theaters. And the one thing that attracted me was the foundation Eric had laid with his OriginKC. This allows me to come in and amplify the OriginKC program, to build on it with my own particular aesthetic and producing point of view. There will be changes coming to that festival, but I won’t be building it from the ground up.”

And much of the new work Carden hopes to develop should reflect the multicultural city that is now his home.

“It’s very much part of me as an artist and a community builder,” he said. “I’m going to be looking very actively to having conversations with the community — their interests, their curiosity, their concerns — and really work to create programming that reflects the ethos and imagination and passions of this community. I’m going to be looking to having conversations with the multiplicity of communities that make Kansas City what it is. I want to help bridge those barriers and change some perceptions and make the walls of the theater more permeable.”

In other words, he wants to eliminate any barriers — real or imagined — that may separate the Rep from the life of the city.

“It’s about connecting KC Rep to all of the communities that make this a really compelling, exceptional and vibrant cultural community,” he said. “I want to know what this community wants from the Rep, the largest theater in the city. I’m working on that right now with those coming to the theater, and I’ve looked forward to having conversations with those people who don’t come out but who could be impacted by theater.”

Music As an Integral Element

Carden, 46, was born and raised near Louisville, Kentucky. He earned a Bachelor of Arts from Hanover College and a Master of Fine Arts in directing from Carnegie Mellon University. For two years, Carden was the associate artistic director at City Theatre in Pittsburgh. From 2009 to 2014, he was associate artistic director of the Writers Theatre in Chicago. Since 2015, he’s worked as a freelance director, working on projects at theaters across the country, from the Old Globe in San Diego in the west, to the Williamstown Theatre Festival in Massachusetts in the east.

One of his signatures is hybrid work — he once developed a show with writer Tim Sniffen called “Louder, Longer, Wagner,” a coproduction between Second City, the legendary improv company, and the Lyric Opera of Chicago, in which the improv artists had to sing, and the opera singers had to discover their capacity for improvising.

Another of his calling cards is the development of plays with music — not musicals in the traditional sense but plays that tell stories in imaginative ways with music as an integral element.

“I’m one of a half-dozen theater directors who are really interested in band-driven theatrical hybrids, concert storytelling hybrids that are really about the live musical experience,” he said.

That means one of his first missions is to check out the local music scene.

“This is a music town,” he said. “It’s got a great history and deep music roots, and it continues to be a thriving music town. There will be traditional musicals, but there will also be new music-driven work, (telling) stories that lead with the music making — hybrids between a concert experience and a theatrical experience.”

All of which reflects a fundamental theatrical philosophy.

“I’m interested in creating work that you experience more than you witness,” he said. “You don’t sit back and watch but lean forward to experience.”

Carden’s website offers a broad overview of his resume. Among the titles are “The Royale,” Marco Ramirez’s fictional retelling of the saga of Jack Johnson, the first Black heavyweight boxing champ; “Mansfield Park,” Kate Hamill’s adaptation of Jane Austen’s novel; “The Old Man and the Old Moon,” created by the PigPen Theatre Co. (made up of Carden’s former students) and told with folk instruments; and “Crime and Punishment,” adapted by Marilyn Campbell and Curt Columbus.

The diversity of material as well as the casting is impressive. Carden suggested that Rep audiences could expect to see, if not any of the specific shows on his resume, productions in that same vein. It really boils down to Carden staging the kind of shows he wants to see.

But as he did with the Lyric Opera of Chicago, he wants to explore possible partnerships with the other arts organizations in town.

“Lots of folks are already reaching out,” he said. “I want to be a bridge builder for KC Rep — bridges to other theaters, to cultural institutions, to communities who think theater might not be for them. It’s been an incredibly warm welcome. The only thing I’m a little overwhelmed by is — because people have such a love for this theater and such a desire for this theater to succeed — meeting expectations. That’s the only thing I’m feeling overwhelmed by. I want to live up to those expectations.”

To learn more about Stuart Carden’s work, visit his website at www.stuartcarden.org. For information on Kansas City Rep’s current season, go to www.kcrep.org.