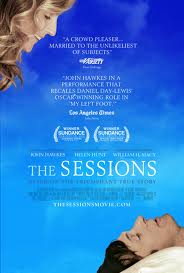 The Sessions is based upon the autobiographical writings of California-based journalist and poet Mark O’Brien confined to an iron lung who is determined – at age 38 – to lose his virginity. With the help of his therapist and the guidance of his priest, he sets out to make his dream a reality with a sex surrogate in 6 sessions.  The cast includes Helen Hunt as Cheryl the surrogate, William H. Macy as the Catholic priest, Adam Arkin as Cheryl’s husband and most notably, John Hawkes as Mark O’Brien.

How can a movie about a man stricken with polio since age 6 move the audience from laughter to tears?   Well, it does.  If committed to an institution following his childhood diagnosis, Mark O’Brien’s life expectancy would have been 18 months, but his devout Catholic parents decided to care for him at home and he lived decades beyond the average age. O’Brien attends UC Berkley on a rolling flatbed and graduates along with his peers.  O’Brien wrote this well before modern day computers by pecking, letter-by-letter using a stick in his mouth from the confines of his iron lung, his safety net between life and death, as he ponders his quest to be “de-flowered.”

O’Brien’s wicked sense of humor effused a love of this very special person while his handicap became secondary.  Women in his life found themselves falling head over heels with his je ne sais quoi charm.  O’Brien’s spirit created a very special bond with his priest that he visited often to discuss his de-flowering desires, something the Catholic Church frowns upon out of wedlock. But as O’Brien says, “My penis speaks to me and I’m getting close to my ‘use by’ expiration date.”  “Go for it, O’Brien” is the quintessential endorsement from his priest, along with his blessing!

The Sessions is an amazing film, a study of human perseverance, of humor, of love, of acceptance and sex.  Mark O’Brien reminds each of us the importance of expressing one’s self and to not be frightened by taking a leap of faith to communicate our deepest desires with love and kindness. Sounds simple doesn’t it? Why is it so difficult for many to express?  That’s what makes this film special …  A+++ for this must-see testament to strength and doing our best with the cards we are dealt.