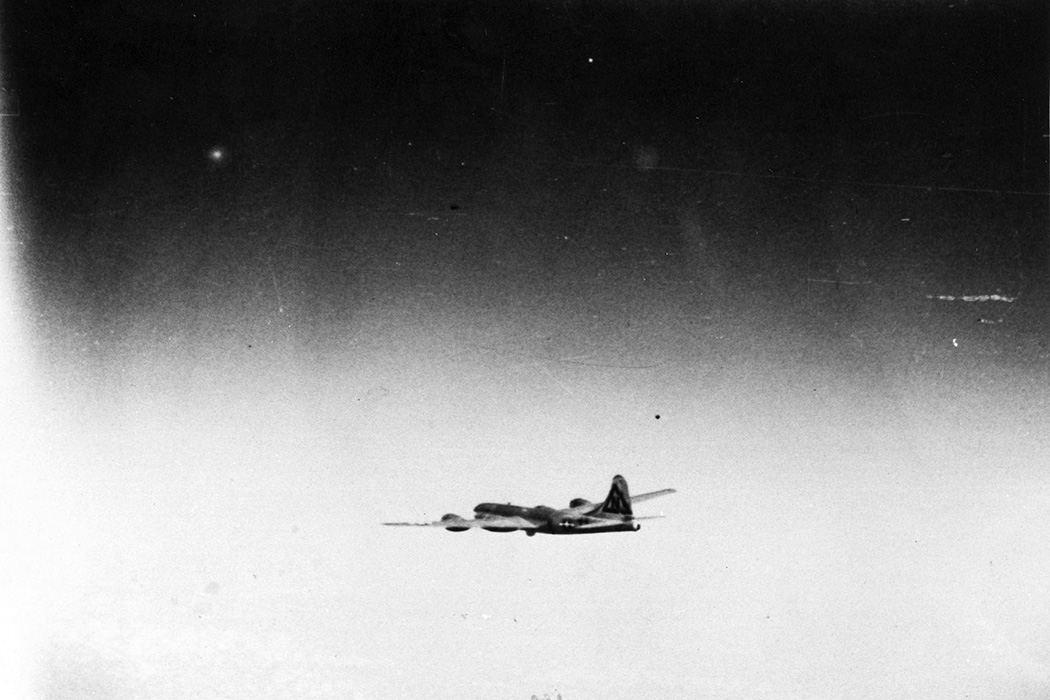 And it’s the focus of “Till We Meet Again”, an exhibit at the Harry S. Truman Library and Museum.

Artifacts, newsreels, maps and patriotic posters bring us face to face with the most eventful year of the twentieth century.

Franklin Roosevelt died on April 12, 1945 a year after winning his fourth election as president. In August, four months after taking the oath of office, Harry Truman made the decision to use newly developed atomic weapons on the cities of Japan.

That decision, which effectively ended World War II, marked the onset of a new war, and the role played by a small silver and green object, perched within a vitrine in one of the last galleries of the exhibit, cannot be overstated.

It’s the safety plug from Fat Man, the nuclear bomb that was dropped August 9 on Nagasaki, Japan.

When the plug was replaced by a fuze that armed the bomb for the Nagasaki mission, this little metal cylinder changed the future of the world, ushering in a decades-long Cold War and the dread of a nuclear Armageddon.

The Fat Man plug has been part of the museum’s collection since 1988, when Truman Library curator Clay Bauske received a call from Philip Barnes of Wilmington, Delaware, who said he had the safety plug and wanted to donate it to the museum.

“I was skeptical of his claims,” Bauske related in a recent email. “But after I got off the phone I checked the records of the Manhattan Project and discovered that Barnes had, indeed, been the electronics officer on ‘Bockscar,’ the plane that dropped the bomb on Nagasaki. So he would have been with the bomb during flight and he would have had access to both the safety plug and the arming plug that was inserted in the bomb when the safety plug was removed.”

“About six months later Mr. Barnes made his car trip west and donated the plug to the Library,” Bauske continued. “He and the flight’s primary weaponeer, Commander Frederick Ashworth, had both signed a statement of authenticity which was attached to the plug.”

Truman’s conclusion to use the bomb was based on projections of American losses fighting a battle on Japanese soil. Army planners feared a militarization of the entire Japanese population. Projections of up to 250,000 American deaths out of an initial Allied invasion force of two million were considered plausible in view of Japan’s determination to fight without surrender.

In the aftermath of WWII making nuclear bombs—lots of them—didn’t stop. Russia, our ally during the war, became increasingly belligerent towards the West. Once the atomic genie was out of the bottle, the global nuclear arms race went into hyperdrive.

In 1950 President Truman announced that the United States would develop a hydrogen bomb approximately 500 times more powerful than the bomb dropped on Nagasaki.

Two years later, the first hydrogen bomb was detonated on Elugelab, a small island in the Pacific. It was vaporized. What is left of Elugelab is a 170-foot-deep crater in the shallow waters of the coral archipelago.

As the responsibility for formulating nuclear weapons policy passed from president to president, different strategies were devised— from the “mutually assured destruction” of the Eisenhower era, to Kennedy’s plan for incremental nuclear war, to today’s SALT and START treaties. Seventy years after Fat Man was detonated over Nagasaki, the United States continues to develop a vast arsenal of nuclear weaponry that is constantly being upgraded for accuracy and lethality.

In Command and Control, his 2014 Pulitzer Prize-nominated book on the history of nuclear weapons, Eric Schlosser characterizes the thousands of missiles and bombs in our arsenal today as “a false sense of comfort.”

“They are a collective death wish, barely suppressed,” he warns. “Every one of them is an accident waiting to happen, a potential act of mass murder.”

Schlosser bases this claim in part on a 1980 accident in Damascus, Arkansas, when a technician’s wrench punctured the skin of a Titan II rocket that carried a nine megaton nuclear warhead. More than 300,000 pounds of leaking fuel—enough to propel the Titan 6,000 miles—caught fire in the underground silo and burned like a ten-story Roman candle. One person was killed and one severely injured. The force of the explosion tossed the warhead skyward, landing 200 feet from the launch site. Its safety circuits worked as they were designed to do, and it never went off.

That close-call prompted the retirement of the Titan II. The impetus to reduce nuclear weaponry speeded up in 1991 under Russian President Mikhail Gorbachev, when detente, a normalization of peaceful global relations slowly began and lasted well into the 21st century.

Recent provocations, including the Russian incursion into eastern Ukraine, the violation of Swedish, Norwegian and British airspace by Russian bombers and fighter aircraft, and the probing by Russian submarines in the Stockholm inlet, smack of the type of Cold War incidents that haven’t been seen for 25 years.

The safety plug from Fat Man at the Truman Library stopped me in my tracks. Just as the plug was a doorway that opened onto the era of the atomic bomb, it triggered my experiences as a Cold War kid, an army brat who lived in post-war Germany and played hide and seek with my sister in the rubble of bombed out buildings.

It took years to reconstruct the infrastructure in cities where we lived: Schweinfurt, Bamburg and Weiden.

My father’s last assignment overseas was with the 3rd Regiment, 14th Armored Calvary at McPheeters Barracks in Bad Hersfeld.

As a kid, the absolute best thing was when the base went on full alert and everything and everyone was mustered to head to the border. At a ringside seat outside the gates, I’d watch a parade of war machines haul out of the base, ripping the cobblestones up from the road as they headed towards their battle stations.

In the late 1950’s the 14th AC got the bomb. The Redstone was a four megaton nuclear-tipped missile with a range of up to 200 miles. Had it been detonated, the resulting radioactive cloud could have floated back, and, according to author Eric Schlosser, “destroy(ed) a fair amount of West Germany.”

It’s difficult for me now to reconcile how much I thrilled at the machines of war and their powerful beauty. If war had come, even a “limited war” in Europe, the continent would have been destroyed.

James Brinsfield Is an artist who is represented by Joseph Nease Gallery. He is a former contributor to “Downbeat” magazine and was a lecturer in the painting department at the Kansas City Art Institute for 18 years.