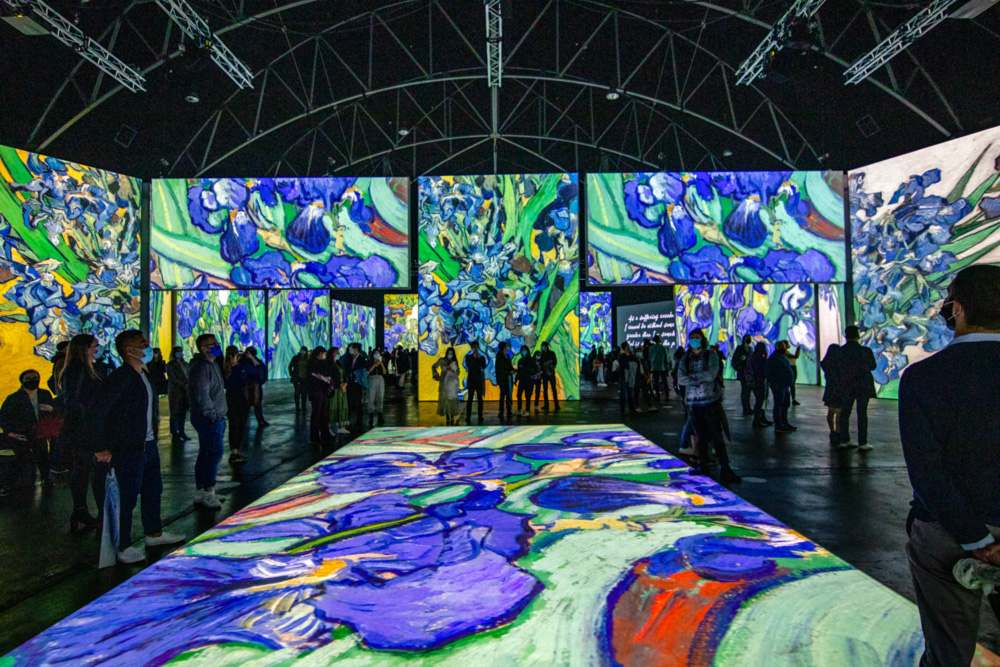 At Starlight: Big Rooms and Digital Productions, A Replica of Van Gogh’s Bedroom and a “Sunflower” Room – Both Suitable for Selfies

Vincent van Gogh is big business. And even when he’s not, people everywhere are free to appropriate his name, his image, his art, and his legacy for their own purposes. Usually, that leads to turning a buck. That’s not hard to do when an artist’s body of work exists in the public domain.

On the lower end of the exploitation scale, the small town of Goodland, Kansas — just east of the Colorado line — promotes its chief tourist attraction as the World’s Largest Easel. The structure is 80 feet tall and on it rests a 32-by-24-foot version of van Gogh’s “Three Sunflowers in a Vase.” Visitors can approach it on a little red brick sidewalk. All you have to do is follow the arrowed sign that says: “Van Gogh Viewing Area.”

Goodland is smack dab in the middle of sunflower-growing country and each August hosts a sunflower festival. According to published reports, Sunflower USA paid Canadian artist Cameron Cross $150,000 to build the easel and create the enormous painting in 1971. He apparently built similar pieces in Australia and Canada as part of a long-term international project.

Move up the scale and you find reproductions of van Gogh’s paintings peddled as decorative wall art on dozens of websites — from posters to “canvas prints.” Just go to etsy.com and search for “Van Gogh Wall Art.” Hundreds of examples will fill your screen. Not to be ignored are the coffee mugs and T-shirts, the satin robes, the masking tape, the wallpaper, COVID-era face coverings and a torrent of other stuff — scarves, bags, cushions, birthday cards, wine and cheese plates, socks, enamel pins, laptop sleeves, smartphone covers, jewelry, adhesive stickers for thermos bottles and on and on.

Now people in the Kansas City region have not one but two touring shows touted as “immersive” van Gogh experiences. “Van Gogh Alive,” created by Grande Experiences of Australia, will play Starlight through December. The other, “Immersive Van Gogh Exhibit Kansas City,” created by Lighthouse Immersive of Canada, will run Dec. 1 through Feb. 16 at a location that had not been announced at press time but would be in “the heart of Kansas City,” according to promoters.

These aren’t conventional art exhibits in any sense. And they aren’t the only ones. A third, called “Beyond Van Gogh,” will play St. Louis through October. In June, artnet.com published a “guide to every single one of the nearly 50 immersive van Gogh experiences blanketing the U.S.,” noting that “at least five different corporate entities are battling to dominate the field.”

“Van Gogh Alive,” the one at Starlight, is the show we know the most about. It was slated to open in the outdoor theater’s interior enclosed stage on Oct. 31 and continue through Dec. 31. For the first time, Starlight and The Nelson-Atkins Museum of Art, two of the city’s oldest arts nonprofits, will partner on a project. The organizations will split the presenters’ share of the revenues.

“It is not an exhibition of the original masterpieces, nor is it a biographical film about the artist, nor is it a book with images; it’s something in between that is becoming a new way to present stories and art.”

Julián Zugazagoitia, CEO and director, The Nelson-Atkins Museum of Art

Rich Baker, Starlight’s president and CEO, said the show came to his attention from the Road Company, a booking agency that normally represents touring musicals. The company pitched Baker on the possibility of Starlight hosting “Van Gogh Alive.”

“Frankly, I got the terms of the deal and immediately called over to the Nelson to see if they were interested,” Baker said. “And Julián was very interested.”

Julián Zugazagoitia, CEO and director of the Nelson-Atkins, took in a version of “Van Gogh Alive” on a visit to Mexico City (his hometown). Baker, meanwhile, traveled to Denver, where he caught another version of the show.

“To me, one of the real benefits of our show is that with the other show all the (ticket) money goes out of town,” Baker said. “But here, at least, some of the money stays here. We’re splitting it 50/50.”

Via email, Zugazagoita said he was struck by the show’s appeal to people from all backgrounds.

“I realized these presentations are becoming a new language; it is not an exhibition of the original masterpieces, nor is it a biographical film about the artist, nor is it a book with images; it’s something in between that is becoming a new way to present stories and art,” he said.

Zugazagoitia said the spectator is surrounded by enlarged images, music and quotes from letters. And visitors can stay as long as they wish.

“Of course, from my view, nothing compares with seeing the original works in person, the canvases he carried into the fields, that were stored for many years by his family before they became precious in the eyes of the world,” he said.

During the Starlight run, the museum will highlight two van Gogh originals from its collection. An installation called “Van Gogh: An Evolution in Color” will include two of the Nelson’s van Gogh originals — “Study of a Peasant Head” and “Restaurant Rispal at Asnières.”

A third van Gogh in the Nelson’s collection, “Olive Trees,” is currently on loan to a traveling exhibition in Dallas and Amsterdam and will be represented in the exhibit by a reproduction.

In addition to the big rooms and digital projections, Starlight will also feature a replica of van Gogh’s bedroom and a “Sunflower” room — both suitable for selfies — and, naturally, a souvenir shop.

What do people who have actually experienced “Van Gogh Alive” think of it? On Facebook, opinions range from unbridled enthusiasm to complaints about the price of tickets. On TripAdvisor, opinions of the show in different locations skewed more negative.

Australian critic Andrew Frost, reviewing the version of “Van Gogh Alive” that played Sydney last year, wrote that the event “has an impersonal feel, a glossy corporate sheen that undercuts the seriousness of the subject, giving the overall experience an aesthetic that’s similar to walking through a shopping centre or airport.”

By mid-September, ads for the other big show — “Immersive Van Gogh Exhibit Kansas City” — began popping up in Facebook feeds with increasing frequency. One depicted a young couple immersed in shadow and light beneath a banner: DON’T JUST SEE THE ART . . . FEEL THE ART. In response to the COVID-19 pandemic, Lighthouse Immersive revealed an audacious innovative streak last summer in Toronto when it created a version of the show that allowed spectators to literally drive their cars into the enormous viewing area.

The Kansas City version invites ticket-buyers to “lose yourself in 300,000 cubic feet of flawless projections animating Vincent van Gogh’s oeuvre.” Where will it be? All we can do is wait for the Big Reveal.

So what would the universally revered Dutch Post-Impressionist think if he could have peered into the future? The man who lived in poverty and survived on the good will of his brother, and who suffered from lifelong mental problems — one belief is that he was bipolar with comorbid disorders — and in a frenzied state cut off his left ear with a razor? In 1890 he died from a gunshot wound that he claimed was self-inflicted. Some historians question that account. According to legend, van Gogh sold only one painting in his life, although some historians dispute that as well. What would this unhappy, profoundly talented man make of his status as one of the world’s most revered artists while commercial forces exploit his name and images on an industrial scale? Would he be amazed? Horrified? Indifferent?

“One side of me imagines that he would certainly feel vindicated, and he would relish that his vision has been so profoundly embraced and recognized. He would be rewarded to know that his quest has been embraced worldwide and that he has become such a household name, respected and admired for showing us the world differently . . . He would certainly be surprised at how much he has inspired others, and how people love his work to the point of these multiple exhibitions, merchandising, and multiple films and biographies exploring his life and work.”

“Van Gogh Alive” at Starlight Theatre has been extended to Jan. 14. Tickets range from $29.99 to $60. Visit tickets.kcstarlight.com.

“Immersive Van Gogh Exhibit Kansas City” has postponed its opening until Feb. 28 at a to-be-disclosed location. Tickets are $55-$75. Visit tickets.kansascityvangogh.com.