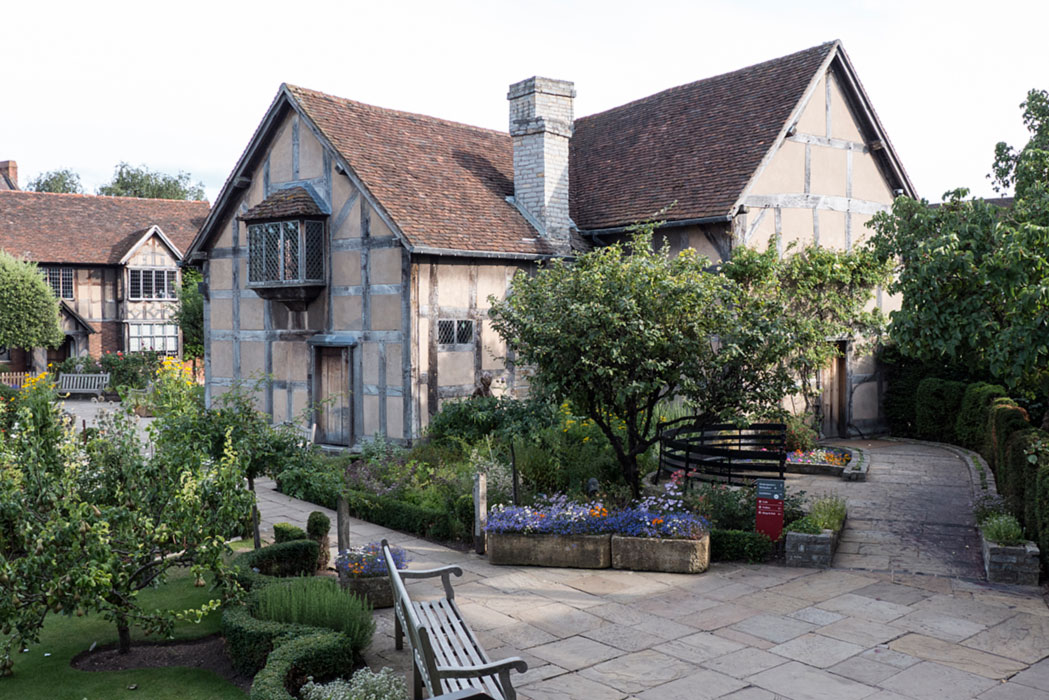 My partner Roger and I recently collaborated with Lisa Ball Travel Design to host a literary journey around England. One of the highpoints of our trip was an after hours private tour of Shakespeare’s birthplace in Stratford-upon-Avon. Though we all thought we were pretty familiar with Shakespeare, our visit to the house and gardens where the greatest of all writers (and the one who has the most universal appeal) was born held many surprises.

Actually, the precise date of Shakespeare’s birth is not known, but since records show that William Shakespeare was baptized at Holy Trinity Church on April 26, 1564 (and it was customary to baptize an infant three days after birth) his birthday is traditionally celebrated on St. George’s Day, April 23.

Following his death in 1616, once the family line had come to an end, the house was allowed to fall into a state of disrepair until a rekindling of interest in the 18th century. Isaac Watts, Charles Dickens, Sir Walter Scott, Thomas Carlyle , and the actress Ellen Terry were among the notables that visited the birthplace and their signatures still remain on the windowpanes around the house. A guest registry book includes the signatures of Lord Byron, Alfred, Lord Tennyson, John Keats and William Thackery. Still, the house was put up for sale in 1847, and the dramatic auction poster proclaimed, The Truly Heart-Stirring Relic of a Most Glorious Period and of England’s Immortal Bard, The Most Honoured Monument of the Greatest Genius That Ever Lived. That evidently got the American showman P.T. Barnum’s attention, and he proposed to buy the home and ship it “brick-by-brick” to the United States.

Gravely offended by this offer, The Shakespeare Birthday Committee formed, including such leading figures as Dickens, and organized a series of amateur performances around the country featuring other noted contemporary literary figures and finally raised the 3,000 pounds necessary to buy the house for the nation.

The restored house is relatively simple, with interesting displays of family life and period domestic furnishings, including William’s father John’s glove making workshop laid out for the day’s work, and for the late 16th century it would have been considered quite a substantial dwelling.

The walled garden at the back of the house layout dates from the mid-19th century and has been specially planted with flowers, herbs and trees that would have been known in Shakespeare’s time and are mentioned in his plays.

Our guide shared with us that the length of the bed in the “birth” room did not mean that the people of that time were short, but that they believed that the Devil would try to come for their souls as they slept, so they slept propped up as if sitting to deceive him that they were still awake.

We also learned that nine months after an exceptional harvest in late August of 1582 in the farming community of Slottery, Anne Hathaway gave birth to a daughter Susanna, following a rushed marriage to Shakespeare in November. Shakespeare was one of only three men who married before they were 20 and the only one whose bride was pregnant. Since he was 18, and Anne was 26, their match was unusual.

The guide’s explanation of the copy of the First Folio of the Bard’s works (published in 1623) on display was intriguing. He explained that the collection was complied by Shakespeare’s fellow actors John Hemminge and Henry Condell, and that without their efforts, half of Shakespeare’s dramatic work would have joined the scores of lost plays by other writers from the Elizabethan and Jacobean period. “Without it, Shakespeare would not be Shakespeare,” he said.

Asked why Shakespeare remains a household name to this day, Clive shared these thoughts: His plays portray recognizable people in situations that most of us experience at one time or another—including love, death, mourning, guilt, difficult choices, separation, reunion and reconciliation. They are written in a way that allows each new performance to take on a life of its own, so that they remain fresh and infinitely adaptable. They help us to understand what it is to be human, and to cope with the problems of being so.