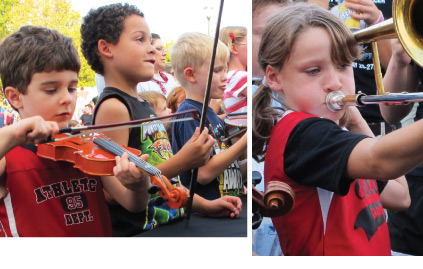 When I was 10, I started playing the violin. I squeaked and squawked as I dragged that tiny bow across the four strings. After Christmas, we were allowed to either stay with the violin or move to the viola or cello. I watched friends settle with the violin they played or jump happily to the cello. However, there was a third instrument called the viola; not many students wanted to play this middle instrument. So even as a fifth-grader, I found myself drawn to the underdog viola. I can say with some satisfaction that I played in All-District Orchestra in high school and played in New York. In college, I continued playing with the semi-professional supported community group, the Philharmonia of Greater Kansas City. My own classical history defines how I support others, especially children, as they experience classical music.

One of the strongest advocates in town is the Kansas City Symphony. Stephanie Brimhall, the symphony’s education manager, takes many instruments into public settings like public libraries. These instrument petting zoos, while the name makes me laugh, allows children can feel the weight of a trombone or draw a bow across the strings of a violin. Perhaps it’s a first introduction to an instrument. The dots are connected when they attend a symphony.

Music is proven to have a tremendous impact on young people’s growth and development. The Kansas City Symphony is proud to provide a variety of ways that people of all ages can learn, create, and become inspired by symphonic music. Here’s acool example. Clardy Elementary fourth-grader AnnaBella Peterson, in the North Kansas City School District, wrote a short story based on Hoe-Down from Aaron Copeland’s Rodeo.

All the fourth-graders in the school district listened to the piece with no prior knowledge and every fourth-grader submitted a piece. AnnaBella’s piece was chosen along with six other winners. Her work was read during the Kansas City Symphony’s fall “Adventures in Storytelling” concert series. District vocal music coordinator Regina Kellogg said the district strives to connect reading and writing with every subject. It’s that goal that impresses me. Why teach a subject in a vacuum? Isn’t it better to see children not only know the instrument families, but also see those instruments in action? Isn’t it important to know that music can inspire feelings and those feelings can be turned into poetry or short stories? There’s no right or wrong way to interpret music.

Starting in January and February, among the Kinderkonzerts, Open Rehearsals, Master Classes, Young Artist Competition and the Instrument Petting Zoos, all the ages will be covered. Brimhall says there is something for everyone. More than 9,000 elementary students will venture to Helzberg Hall to experience the orchestra in February. Several hundred middle school, high school and college students will witness the orchestra through dress rehearsals and master classes.

What should the community know about the symphony’s push for education? Events are accessible to everyone as possible. Young People’s Concerts, KinderKonzerts, and Open Dress Rehearsals are only $2 per person, making them some of the most affordable arts experiences in the city. Don’t we want to create future concert-goers, future symphony players and simply those who appreciate music? I know I do.