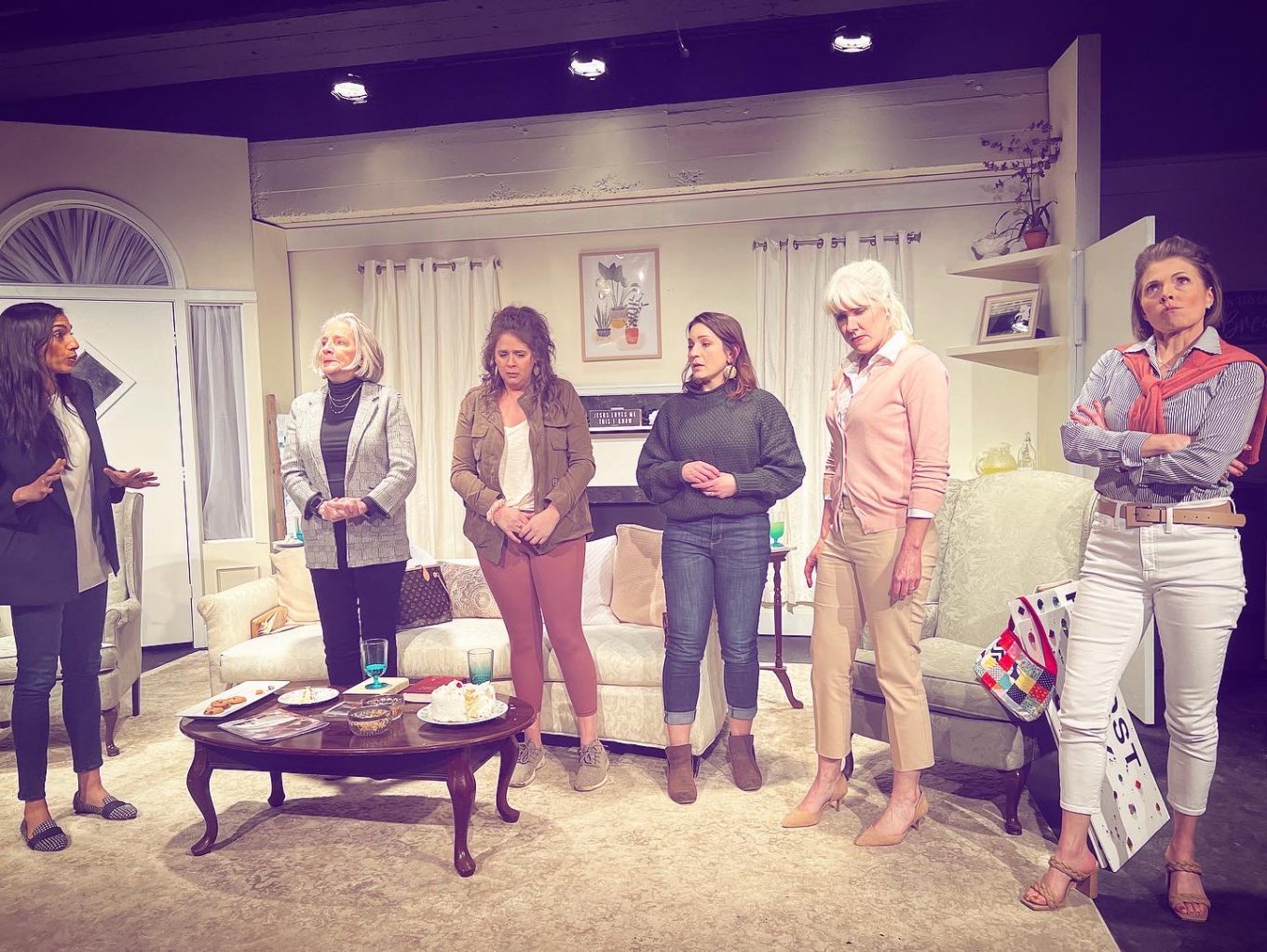 After more than two years—what artistic director Korey Childs calls “the long intermission”—the Arts Asylum is welcoming audiences back, to a new space with a new play, appropriately enough, about reaching new common ground. “Gabby for God,” written by Kansas City playwright Jennifer M. Cannady and realized by a stellar, six-member ensemble, is an openhearted, character-driven comedy that explores how differing backgrounds and belief systems can divide us—and how that divide might be overcome.

The play opens with a flash-forward prologue—and a flash of steel. At the height of a yet-unexplained argument, a character pulls a knife—from a sumptuous cake—and swings it threateningly. A cutting blade, covered in sugary frosting, is an apt-enough metaphor for what’s to come.

From there, we rewind to the setup: Kate (Jessica Franz-Martin) is dragging her friend Priya (Kavita Gorantla) to the Springfield, Mo., home of Gabby (Stasha Case)—a nominal acquaintance from their kids’ school—for what Kate thinks is “book club,” failing to realize that the book in question is the Good Book. Priya and Kate are, respectively, Hindu and Catholic—neither of which, it turns out, Gabby’s bible club considers exactly “Christian.”

Despite the misunderstanding, Gabby implores the pair to feel “completely comfortable,” even as a torrent of microaggressions flows their way, from the constant mispronunciations of Priya’s name to the indirect questioning of Kate’s presumed (Catholic) obsession with saints.

Directed by Kipp Simmons, the action swerves between satire and farce, with some situations heightened to the brink of plausibility, punctuated by moments of tension and genteel racism that are all-too-real. Besides Gabby, we meet regular club members Montgomery (Erica Baruth), a namedropping pseudo-socialite, and Bea (Samantha Crook), an excitable recent-divorcee who is seeking new purpose in scented-candle sales (top-sellers include “Luscious Lavender” and “Audacious Amber”). The last to arrive is Gwen (Kay Noonan), a once-big-city-dwelling ACLU staffer and big-sister type, who serves as something of a bridge between Gabby’s group and the larger world as it’s known to Kate and Priya (and, the play assumes, the audience).

The all-female cast is fantastic. Gorantla plays Priya as a stand-her-ground cynic, yet her occasional deadpan one-liners and meme-worthy side glances earn some of the biggest laughs. Franz-Martin brings Kate’s genuine good nature to the fore. Baruth endows the sassy Montgomery with a delightful Rue McClanahan vibe, while Crook gives lovable depth to not-so-scatterbrained Bea. Noonan’s Gwen dutifully keeps the whole enterprise grounded. And in the title role, Case likely has the toughest task in making an ostensibly closeminded character endearing, thanks largely to her great comic timing and vulnerability in the second act.

(In his curtain speech, Childs also acknowledged Sara Crow, the understudy—a custom that should be followed on all opening nights.)

“Gabby for God” emerged from the Arts Asylum’s “Script Saturdays” series in 2019, and was first slated to premier in 2020 at the company’s original downtown home on East 9th Street. Instead, it becomes the first in-house production at the new digs on the A to Z Theatrical Campus in Brookside East.

For a full-length debut, Cannady’s script is impressive. The pace isn’t always consistent, with some conversational lulls—unavoidable in real life, but cuttable on the page—and redundant exposition. But when the conflict gets going, the dialogue sparkles and the characters come alive. After the foretold climax—Chekhov’s knife?—the story lands softly in feelgood territory. (The deliciousness of Gabby’s cake is an initial point of agreement.)

Of course, a first production is still the beginning of the journey, and with some tightening and updating, there is potential here for a more pointed play that will not only charm but further challenge audiences of all backgrounds to consider their own preconceptions. As of now, though, “Gabby for God” is sweet and satisfying. Like a nice piece of cake.

Victor Wishna is a Kansas City-based playwright, writer, author, editor, and commentator, among other things.