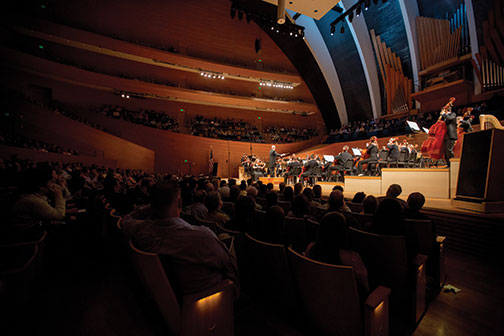 Students from more than 125 area schools comprise the four orchestras of the 56-year-old organization, dedicated to providing enhanced musical experiences and free concerts throughout the metropolitan area.

The Youth Symphony of Kansas City was incorporated on July 31, 1958 under the direction of conductor Leo Scheer. The organization initially consisted of one orchestra with 80 musicians. Five weeks later, the group presented its first concert and Mayor H. Roe Bartle proclaimed the week as “Youth Symphony Week.” In 1964, the organization added a younger orchestra, the “Junior Youth Symphony,” due to increased demand. In 1991, a third orchestra was formed. Today, there are four orchestras to accommodate talents from students in late elementary through their senior year in high school.

In mid-May of this year, more than 515 students took up the chance to audition for one of the four orchestras. Each year, no matter the previous year’s placement, all student musicians must audition. About 390 students are placed among four orchestras.

The mission of the Youth Symphony of Kansas City is to educate young musicians through enhanced orchestral experiences and to build the present and future classical music community. “In our 55 years, we have estimated that about 8,500 have participated in the program,” Murray says. “The common thread is that shared fantastic experience that they take away from their involvement. It’s more than being part of a team, but a community.” To be part of one of these orchestras is to be responsible in knowing the music, how it fits in with the section and then the larger relationship across the orchestra, he explains. “In the end, we build, at present incredible orchestras and a future where these young people continually give their best and rise to the occasion in whatever they set out to accomplish.”

“I am pleased to be with this group. I have been conducting for fifteen years. We provide those stair steps that allow musicians to move up,” Berlin says. He also served on the board during the 1980s and has an affinity for the Youth Symphony as his daughter played in the orchestras. He recommended his high school students audition for the Youth Symphony. “When students who make the youth orchestras join, they are eager to learn,” he says. “It is a dream job for those of us who are directors. We get to be educators and more as we know these students all have the same desire to be challenged to make great music.”

Murray articulates that the orchestras are meant to be accessible. “We have financial assistance for students and families. Our concerts are free. We want this program to be available. … It is inspiring to watch the musicians challenge themselves as they receive experiences they don’t get elsewhere including performing at the Kauffman Center for the Performing Arts, the Folly Theater, Yardley Hall and more.”

The auditions place students in orchestras. “We work to bring out the best in their playing,” Berlin says. “We see their strengths and weaknesses. As their teachers, we look at teaching tools and want to offer up a mixed repertoire. Each piece played gives them challenges. We may play Mozart or Haydn. There might be romantic pieces or even some pop tunes.”

During the 2014-2015 season, the orchestras will play across the metropolitan area including a side-by-side concert with the Kansas City Symphony Oct. 27 and an open house concert Dec. 14 where all four groups perform at Memorial Hall in Kansas City, Kan. “We applied to perform at the Midwest Clinic in Chicago, which is an international conference. It’s an important step forward to increase the organization’s visibility on a national level,” Murray says. An estimated 17,000 will be in attendance with representatives from all 50 states and 30 countries. “We are one of four full orchestras to perform. It’s great to represent all the good that’s happening here with the thriving arts scene in Kansas City.”

Berlin figures the exposure will also exhibit the professionalism of the conductors and the musicians. “We get to share the quality of what we produce here.” Murray expects the orchestral organization to be distinctively prepared for the future. “We are uniquely poised to be a catalyst offering positive social change through music. We can provide the underserved with hands-on music education. It is incumbent on us to understand the opportunities to serve those needs.