Early American Silver From the Cahn Collection puts a shine on silversmiths. 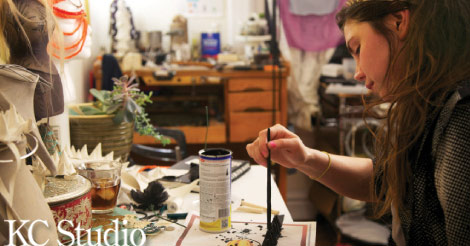 As a young child, Robyn Nichols visited The Nelson-Atkins Museum of Art with her mother every Sunday.

“My mom was a fashion illustrator who pushed all of us to be artists,” said Nichols. “I remember standing in the museum and telling her it would take a lot of work to be on the walls here.”

Nichols has apparently worked very hard, because she is one of two Kansas City artists who will show silver pieces in the exhibition Early American Silver from the Cahn Collection, which opens at the Nelson-Atkins April 20 and runs through Nov. 3.

“This is a wonderful opportunity for the museum to display a different craft, since we don’t own any American Colonial silver,” said Catherine L. Futter, The Helen Jane and R. Hugh “Pat” Uhlmann Curator of Decorative Arts. “I wanted to illustrate that the materials and techniques for silver haven’t changed in 300 years, so I invited two local silver artists to display some of their work in the exhibition.”

The Cahn Collection that will be on view consists of more than 60 pieces of Colonial American silver that was made in the late 17th century to the mid-18th century. While many of the pieces have a close affiliation with European silver, both in design and technique, American silver tends to be more restrained, with less decoration than its European predecessors. For instance, there are very few American silver candlesticks. Candlesticks were usually cast in one piece and required a great amount of silver. The candles were also very expensive, so very few were made for American consumers.

The grandson of a silversmith, Paul Cahn’s boyhood collections included stamps and marbles. As an adult, he acquired his silver collection over a period of 50 years. He aggressively built a collection that has been featured in exhibitions from Mexico City to Kansas City.

“The vast majority of the population collects something,” said Futter. “We have an intrinsic psychological need to put things together to better understand our world. This exhibition is about more than silver–it also speaks to basic human nature.”

Erica Voetsch, the other Kansas City artist whose work appears alongside the Cahn Collection, is incredibly excited to be included. Voetsch sells her current work under the name Majendie. The Shawnee Mission East graduate received a Bachelor of Fine Arts degree from the University of Kansas in Jewelry Design and Metalsmithing after growing up playing with silver pieces in her parents’ retail jewelry store.

“I’ve always been drawn to fashion and I love exploring the line between ornamentation and functionality,” said Voetsch. “I look at my work as functional sculpture.”

While Voetsch’s parents encouraged her to follow her heart wherever it led, Nichols’ artist parents actively helped her explore artistic desire.

“My earliest memories of my father were of him putting plastic down on the dining room table and covering it with mounds of dirt,” said Nichols. “My sisters and I built cities, mountains, houses, just about anything with that dirt. They always told us to play and create with the things we had. Everything turned into an art project. I loved it.”

Nichols taught herself to create jewelry while at Truman High School in Independence, and went to the Kansas City Art Institute with the goal of being a fashion illustrator like her mother. But metal was her first love and she was soon creating wearable metal art and tableware.

“The light bulb went off in about 1986 when I didn’t have a set of salad servers so I made them,” said Nichols. “I loved making something that was so beautiful but also functional.”

The Cahn collection features examples of the finest silver used in the homes of wealthy 18th-century American merchants and their families. The objects, including tankards, tea services and even shoe buckles, were considered precious when they were made. Their value, both in the expensive material and craftsmanship, continued through the centuries. Many of the works in the Cahn collection are inscribed by the family members who inherited them—illustrating how silver has always been considered an heirloom, passed from one generation to the next. There will be 38 pieces from the Cahn Collection on view in six galleries at the Nelson-Atkins.

Curator Futter has mixed the work of Nichols and Voetsch with the 18th-century American silver. Silver has not changed in the way artists work with it or the way owners value it.

Futter wanted to illustrate that Nichols and Voetsch use the same techniques that the colonial silversmiths used two centuries earlier. It is simply the style that has changed and some of the designs. Nichols fabricates intricate silver implements, many of the same types that would have been used on the colonial tea table, but in a contemporary style incorporating wildly swirling tendrils of morning glories. Voetsch fashions fascinators, or intricate silver headpieces that frame a woman’s face in a modern style.

The relationship between the 18th- and 21st-century silver indicates that this alluring material continues to fascinate both artists and owners through its intricate designs and glittering surfaces.

“I hope the people who come to this exhibition see the connection between the silver pieces,” said Nichols. “It’s very cool to work with a medium that’s so permanent. There’s a little bit of ‘wow’ here. I have such a sense of triumph and accomplishment. This is thrilling.”