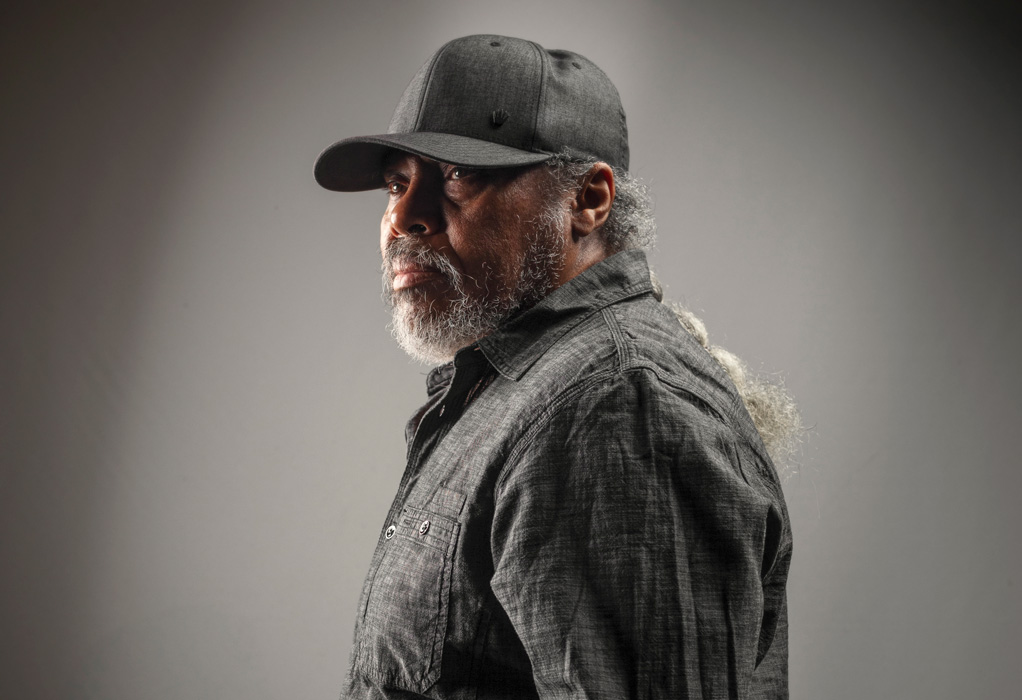 After a lifetime of making art, Joseph T. Newton has had an especially busy schedule of showing his work in recent months.

In late 2018, Newton participated in an exhibition featuring members of Kansas City’s African American Artists Collective at Tomahawk Ridge Community Center in Overland Park. Soon after that, Sonié Ruffin included two of his large, boldly hued paintings in her remarkable “What’s Going On” exhibition at the Leedy-Voulkos Art Center. In December, Newton participated in the African American Artists Collective residency at the Charlotte Street Foundation’s Capsule space. In March, the Bruce R. Watkins Cultural Heritage Center opened a solo exhibit of Newton’s abstractions and Egypt-inspired works in the balcony gallery, where it continues through May 31.

Newton’s exhibition at the Watkins Center inaugurates a new exhibition series curated by Ruffin, who approached the center’s executive director, Chiluba Musonda, with a proposal to show the work of Kansas City-based African American artists.

In Musonda’s view, Newton’s work aligns perfectly with the Watkins Center’s purpose. “As a cultural heritage center, it is part of our mission to help Kansas City-based African American artists share their cultural expressions,” he said.

Newton’s paintings impress from both near and far. Seen from a distance, many of his colorful and patterned works evoke ancient Egypt and seem instantly familiar. While a lesser artist might struggle to say anything new about such an ancient artistic tradition, Newton incorporates surprising variations that reward close viewing.

“Joseph’s artwork is the quintessence of elegance, brilliantly choreographed in today’s world of contemporary and abstract art,” Ruffin said in a recent email. “His use of color is powerful and commanding. His use of empty space details the objects that exist throughout his work, all the while creating two- and three-dimensional depth and space to share a visual story that delights the eye.”

One of Newton’s strategies is to blow up details of portions of Egyptian artifacts that others might miss.

In “The Beginning of No End,” the three knotted forms that make up the central motifs of the painting reproduce the interior of a gold-and-electrum-plated lobed cup from approximately 1000 BCE. In the background of the painting, delightfully dizzying falcon feathers derive from feather images in a piece of jewelry that dates from about 1325 BCE.

Newton’s meticulous approach to artmaking can be seen near the outside edges of the left and right knotted forms in this painting, where the knots appear translucent so that we can see his feathered handiwork below.

The artist asserts that his illusion of three dimensions modernizes Egyptian art. “Egyptian wall paintings are flat. I update them by using shading.”

Born in Kansas City, Kansas, Newton says he has always made art, and that he was introduced to painting at age 8 or 9. He started painting canvases in his 20s when he lived in California. When he returned to Kansas City, he started a family and worked for the Kansas City, Missouri School District from 2000 to 2009.

At this point in his life, artmaking was therapeutic. “I would get home from work, turn on jazz and make art to wind down,” he said.

In 2009 Newton moved to Charlotte, North Carolina, to be near his aging mother, and he showed in that city’s NoDa Arts District. In late 2017, he returned to Kansas City and continued to develop his vision and aesthetic.

Newton’s approach to color modulation can be seen in the stalks and blooms of his lotus blossoms and papyrus reeds. In his work “Between Eternity and Infinity the State of Endlessness,” his linear gradations bring to mind Modernist stripe paintings by masters such as Gene Davis, Agnes Martin or Barnett Newman.

One of Newton’s other modernizing devices is to adhere linen, burlap or extra canvas to his surfaces and orient the extra material so that it reinforces the overall composition. He paints over it, encouraging the viewer to look at the work closely and from multiple angles in order to make out the form.

One of the most successful examples of this technique is in the large triptych “Meta-Pharaonic,” in which the work’s angular design echoes the diagonals of adhered material.

Newton’s fascination with ancient Egypt goes beyond formal concerns. “Pharaohs ascended to the throne through their mother’s side of the family,” he said. “Females were very powerful in Egyptian culture. There was balance.”

The tripartite arrangement of “Meta-Pharaonic” brings to mind an equal-arm balance. Found in ancient wall paintings and illustrated texts, the image was associated in Dynastic Egypt with judgment and the afterlife.

A large throne shaped like the ancient Egyptian glyph for “gold” fills the central panel, along with symbols of royal power such as scepters, a fly whisk and a staff with a crook. Each side of the throne is balanced by a bowl-like form that supports two scepters and an ankh, the symbol for life. Other balance-like bowls appear in the painting’s side panels.

The sky god Horus was believed to be embodied in kings and was symbolized by a falcon, and a falcon wing forms the background for Newton’s three panels. In the central panel, falcon wings conjoined with a scarab beetle curve upward to encircle a sun disk. In Egyptian cosmology, the sun disk can be associated with either Horus or the sun god Ra, while the scarab beetle was believed to push the sun across the sky each day. Near the top of each panel, Newton placed disembodied eyes, identified by the artist as the Eye of Ra, a symbol of judgment.

The most important symbols in “Meta-Pharaonic” may be those that appear along the bottom. Symbols of rebirth appear in the central panel in the form of lotus blossoms that support the throne, and in a long papyrus reed that stretches across and unites all three panels.

Newton takes all this fixation on judgment and mortality in stride. “The real name of the ‘Book of the Dead’ is ‘Going Forth by Day,’” he said. “It’s about how to live in this life in order to get to the next life.”

“Meta-Pharaonic: The Art of Joseph Tyler Newton” continues at the Bruce R. Watkins Cultural Heritage Center, 3700 Blue Pkwy., through May 25. Also on view is jewelry by Clarissa Knighten. Hours are 10 a.m. to 6 p.m. Tuesday – Saturday. For more information, 816.513.0700 or www.brucewatkinscenter.com.