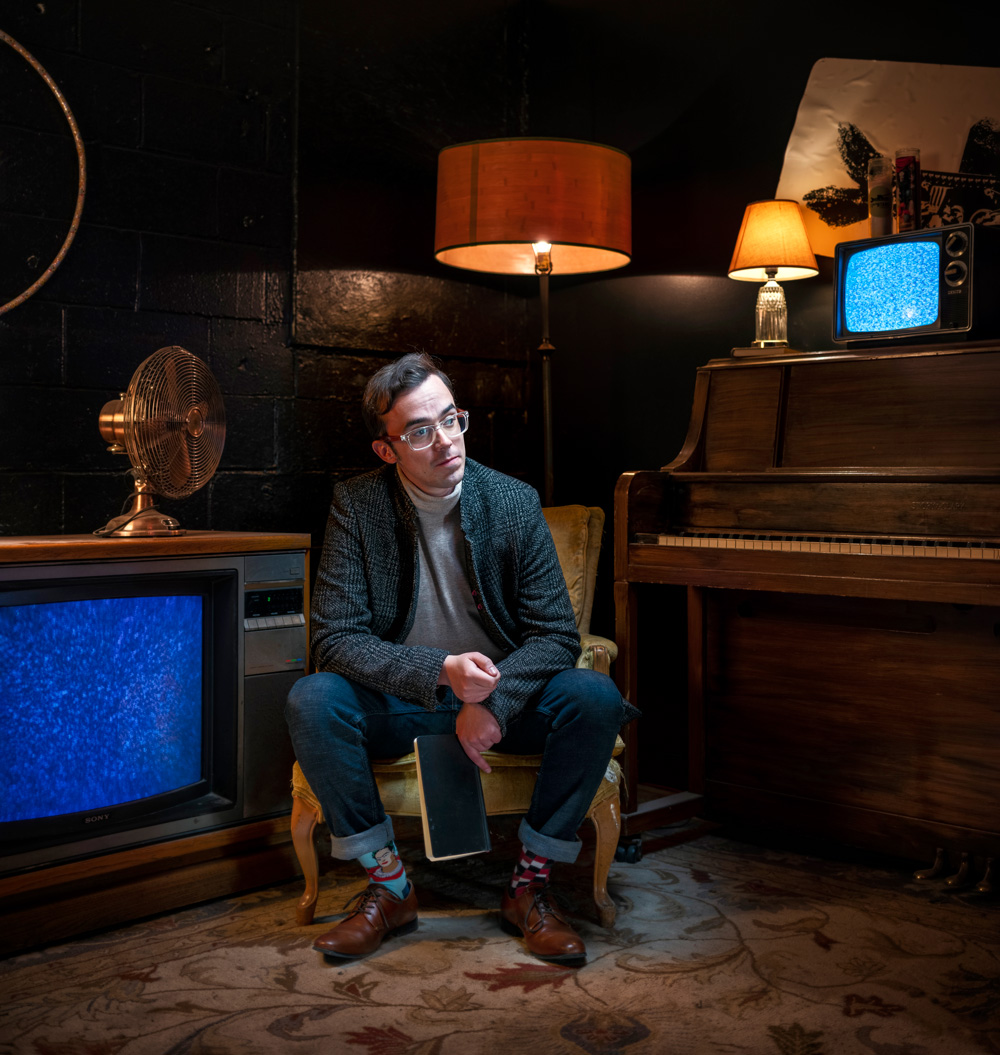 R.H. Wilhoit describes himself as “pretty shy by nature.” That may surprise theatergoers who have seen him on stage in Kansas City over the last 10 years. He shines in ensemble performances, but he also excels at one-man shows, including Spinning Tree Theatre’s 2019-2020 season production of “Every Brilliant Thing.”

Solitarily taking on a play about suicide isn’t an easy task, but Wilhoit met the challenge. “Wilhoit fits seamlessly between the immediacy of childhood moments and the weary synthesis of adult reflections,” wrote Liz Cook in “The Pitch.” “He’s also a skilled improvisor,” she noted, which was evident as he interacted off-the-cuff with audience members, making each show different and new.

Wilhoit will once again showcase his solo skills when Rusty Sneary directs him in a “one-person show with heart, humor and menace” designed for the intimate Black Box space in the West Bottoms. (More information will be released soon at www.blackboxkc.com.)

The R in R.H. Wilhoit stands for Robert, the name of both of his grandfathers. The H is for Hollis. Another important part of his biography involves his 2016 appearance in Erika Baker’s “Kingdom of One.” The piece was transformational for him, as experimental theater, and for partnering him with Alisa Lynn, an actress he describes as the “love of my life.” He also produces shows as an artist board member with Confluence Theatre.

As the pandemic gathered steam last fall, Wilhoit, with The Coterie, appeared in one of the only live shows around, a socially distanced performance of “Electric Poe” in Union Cemetery. He delivered two Edgar Allan Poe pieces with musical accompaniment, costuming and a perfect setting.

In early 2020, Wilhoit was to participate in another Coterie production, “Puffs,” a Harry Potter-themed story of a boy wizard. The show, like nearly all others, was cancelled. At the thought of his calendar and most social contact on pause, Wilhoit heeded his fellow actor, Darrington Clark, who said he would be reaching out to friends in the arts. Wilhoit made his own plan. “I was inspired by his goal to work harder on myself and my own journey in connecting.”

Within a week, he had decided to start a podcast. “I would just call friends and just chat,” he said. The podcast, eventually titled “Hollis Makes A Phone Call,” (Wilhoit goes by Hollis to friends and family), revolved around three questions to guide the conversation: How do we know each other? How are you handling the pandemic TODAY specifically? What lessons will you take from this experience and implement in your daily life once everything returns to “normal”? “The podcast shaped my experience with the pandemic in all sorts of ways,” he said. “I grew as a person, an artist and an earthling.”

He also managed several readings, both professional and casual with friends. Dating from his high school role as Hamlet, “Shakespeare was my guy,” Wilhoit said. In college he played “Richard III.” Sidonie Garrett gave him his first professional acting job in the Heart of America Shakespeare Festival’s 2015 production of “King Lear.”

The pandemic took him back to Shakespeare, albeit virtually, doing “Merchant of Venice” and “Macbeth” through California connections, followed by “Shakespeare At Home,” a series of scenes produced by the Heart of America Shakespeare Festival in KC. He was delighted to be “playing a true straight man for the first time professionally” in the role of Benedick Cratchit” in the HASF’s production of “A Christmas Carol.” “I allowed myself to fall in love with these plays all over again,” Wilhoit said.

He also gleefully took part in Katie Gilchrist’s wacky Zoom reading of “Christmas Vacation” and in his first-ever “No Sleep November” with The Living Room, a 24-hour play festival, in which he got to resemble Pee Wee Herman for a full day.

In early January, he contracted COVID-19, but rebounded within a couple of weeks.

Currently, he is “knee-deep in a new experience: teaching.” “(It’s) an occupation I never thought I’d enjoy or excel at,” he said. “I won’t go so far as to say I’ve mastered it — no one ever does — but I certainly love it. The courses I teach at the Coterie typically revolve around the Union Cemetery production of Electric Poe.”

Wilhoit found theater in his sophomore year of high school with the full support of his father, whom he calls his “greatest influence.” When it came to college, Drury University in Springfield, where the main stage was named for his paternal grandfather, a beloved theater professor, was a clear choice. While nervous about meeting expectations and being accused of nepotism, Wilhoit accepted a scholarship and ended up thriving under theater department head Robert Westenberg, who had been a successful actor on Broadway. (The Wolf in Sondheim’s “Into the Woods” was one of his major roles.)

Westenberg was the mentor to Wilhoit that he dreams of being for his pupils. While introducing them to his own favorite experiences in plays as diverse as “The Toymaker,” “Scream in Blue,” “Much Ado About Nothing,” “Bed Play” and “The Ballad of Lefty and Crabbe,” he’ll also teach them what he’s taken to heart: “The work is never done.”