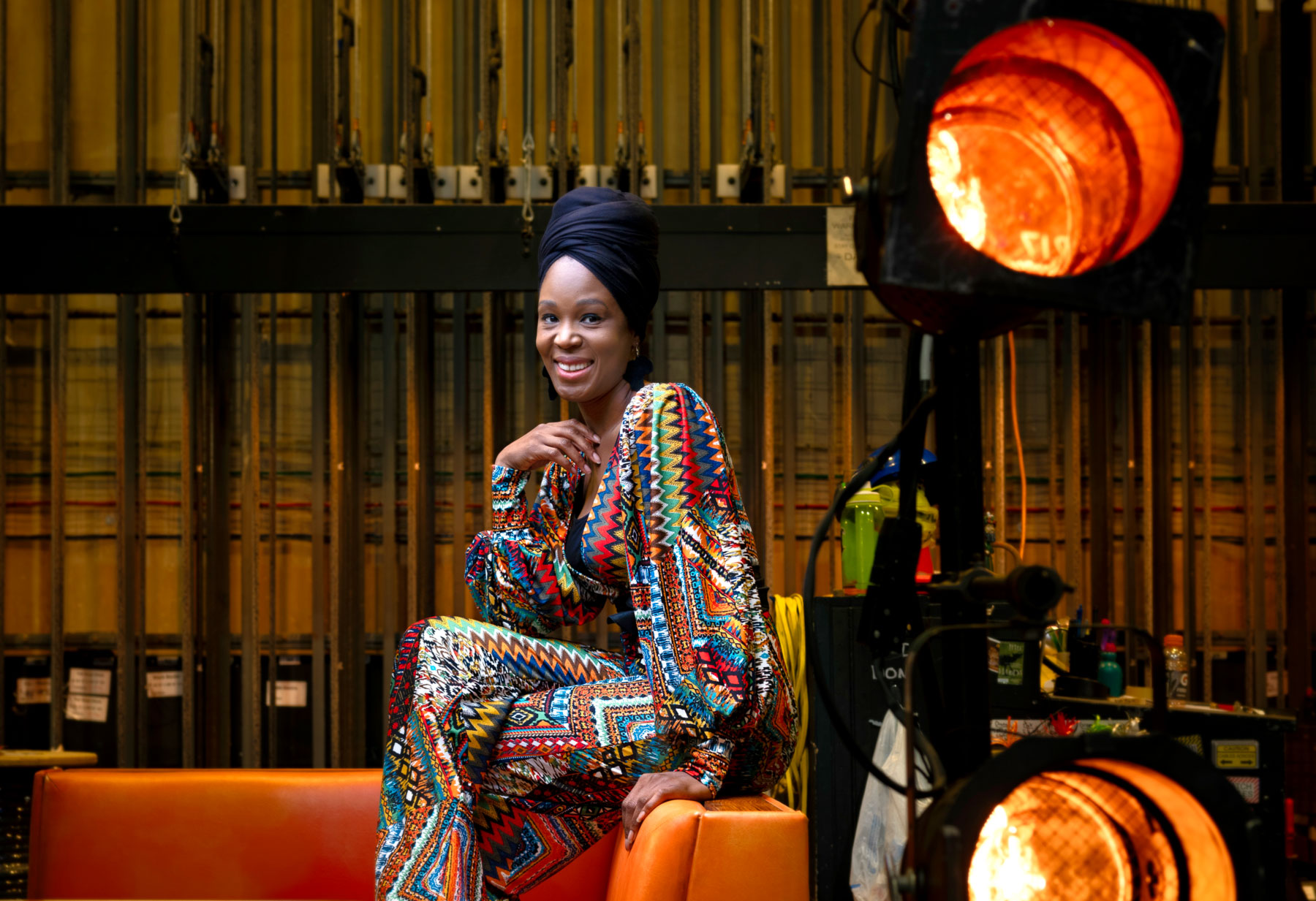 Fresh from UMKC’s Graduate Theatre Program, the Versatile Actress is Racking Up the Roles and Working to Broaden the Reach of the Art Form she Loves

When Yetunde Felix-Ukwu earned her degree from the UMKC graduate theatre program a year ago, she had plenty of professional exposure under her belt as well as appearances in student plays. In “Secret Soldiers” at The Coterie, Felix-Ukwu played four characters: Harriet Tubman, Civil War Nurse Hughes, Mary Lewis/William Kemp and a barmaid.

“This experience was fun because I explored such different characters in such a short period of time,” she said. “I was dubbed the ‘Quick Change Queen.’”

In the Unicorn’s “Men on Boats” she played John Colton Sumner, an explorer on the Powell Geographic Expedition in 1869 in the Grand Canyon. In that role, I “explored my masculinity,” she said. But her favorite role was for KC Actors Theatre as Renfield in “Dracula,” “because of the feminist twist that was put on what can be a misogynistic play. The female characters were all empowered, and though I spent much of my stage time in an actual cage, I’ve never had more liberty to explore and craft a role.”

Following a 2019 summer theater tour to Bolivia, Felix-Ukwu returned to learn she had been proposed as an assistant to KC Rep’s new executive artistic director, Stuart Carden. An interview was quickly set up, and she was contracted.

For several months, Felix-Ukwu helped familiarize Carden with the theatre’s many existing relationships, and, in general, offered him an extra set of hands in navigating and establishing his new plans and territory.

“Because she puts people first and brings such an energetic and positive energy to all of her interactions, she’s helped create a fun and productive atmosphere and an open-door mentality that keeps our office humming,” Carden said. “In addition to her experience producing, she has brought an important lens on our work at KCRep in equity, diversity and inclusion.” He added, “She’s also majorly upped our style quotient in the office.”

Felix-Ukwu’s work for Carden left her time to pursue auditions. She had already won the role of Mrs. Cratchit in 2019’s “Christmas Carol” and a part in the Unicorn’s “Babel” in Jan./Feb. 2020.

Carden was taken by Felix-Ukwu’s Mrs. Cratchit. “Her warmth and good humor are so crucial to our understanding of the joy and love in the Cratchit household in Christmas Present,” he said. “And then that good heart is all the more resonant with Yetunde’s approach to a bereft Mrs. Cratchit in Christmas Future, who chooses to push through her pain for the sake of her other children. She is so wonderfully moving and honest.”

All in all, the last half of 2019 was a dramatic ride for Felix-Ukwu, a dream come true capping a difficult journey.

The Lure of Acting

Born in Houston to Nigerian parents, Felix-Ukwu spent her youth in Washington, D.C., and it was there she underwent a life-changing event. She had been born with sickle cell anemia, and in 2009 she became only the sixth person to undergo a new bone marrow transplant procedure being tested at Johns Hopkins. She emerged from the surgery and nearly two years of recovery a new person, asymptomatic and able to make plans for the first time.

With a fresh slate before her, Felix-Ukwu took advantage of a residence-for-work program offered by the Nigerian government. During her five-year stay, she interned for the national tourism bureau, worked as speechwriter for the assistant executive governor of Cross River State and did voiceover work for one of the major TV networks.

Finding herself drawn to a voice and acting career, Felix-Ukwu returned to the U.S. and began taking acting classes at a community college in Maryland. In fall of 2015, she traveled to New York for URTA (University Resident Theatre Association) auditions. Of the 50-plus institutions in attendance, Felix-Ukwu chose UMKC, where she began in 2016.

Her first time on stage was in the university production of “Julius Caesar.” It was “terrifying,” she said, but exhilarating at the same time. She relished the work that followed, particularly the rewards of non-traditional casting, the thrill of aging from 20 to 80 in one role, the fulfillment of “devising” a production. As she explains it, “Devising work is so meaningful because it’s the ultimate representation of me as an artistic creator; it’s like making a meal cooked from scratch.”

Felix-Ukwu’s parents expected her to follow them into law or medicine. It took years to bring them around, but by the time she graduated they were attending all her shows. She vividly remembers them sitting in the front row of the Unicorn for “Men on Boats” and cheering proudly.

Spring holds more opportunities for Felix-Ukwu. In addition to facilitating projects at KCRep to move theater into communities with little theater exposure, she’s done a few short/independent films that are making the international film festival rounds. She is also workshopping a one-woman show and hopes to present it in Amsterdam this summer.