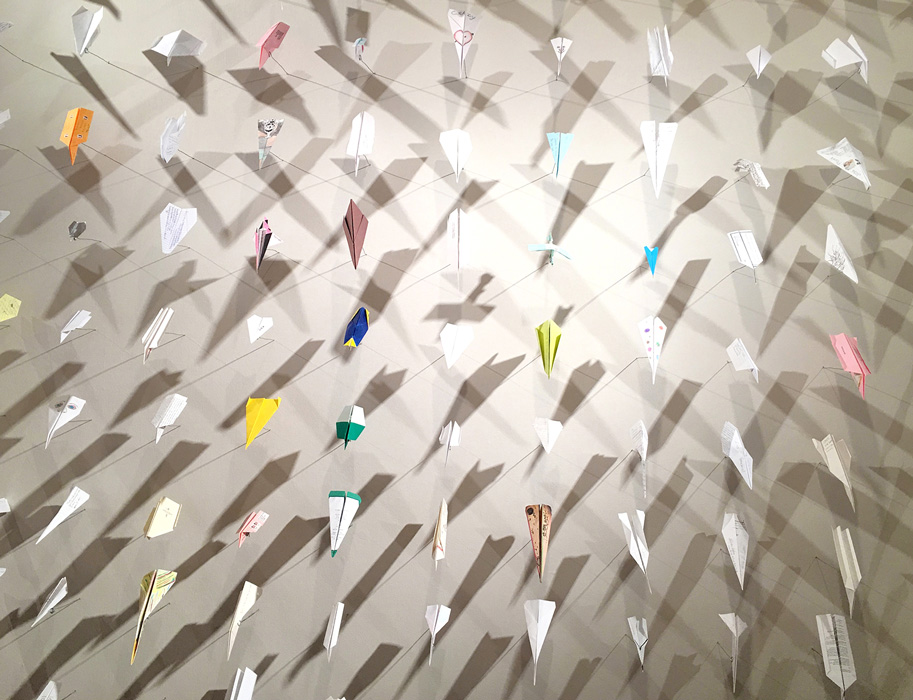 Through Paper Airplanes, the Kansas City Artist Connects with Incarcerated Men and Women Across the Country

You could almost call it art by accident.

Ben Wills and a friend were tossing a paper airplane back and forth in their Atlanta studio. The plane had been constructed by a man in prison. It was sturdy. It flew straight and true.

Wills and his friend had been playing catch with the construction for several days in a row. For a while, Wills had been wondering how he might connect his art to the plight of incarcerated men and women.

How could he restore the humanity of prisoners to people on the outside?

“I didn’t even know I had what I needed for days,” Wills said in his Kansas City studio the other day. “We had a toy. We had had such a good time flying it back and forth, then I thought, I should ask for more of these. Then, kind of immediately” — he snaps his fingers — “They’re kind of perfect for what I wanted to address.

So he did. The result: “Airplanes,” an exhibit of dozens of paper airplanes sent to him by prisoners all over the country, on display at the Kansas City Public Library Central Library through March.

“When they’re all together it kind of has a choir effect,” Wills said. “They represent the individual really well, but together the song is really loud.”

Considering his background, it makes sense that he describes the visual artwork in musical terms.

His Plan A as a young adult was to play in a band as long as possible and avoid ever going to college.

For a while, it worked. He played bass in a country/bluegrassy trio with his friend, Americana singer-songwriter Lera Lynn. They toured all over the country with k.d. lang.

Along the way, Wills broke his scaphoid, a bone in the wrist that has no direct blood supply. It required massive surgery.

“I was talking to my doctor about it and asked if it was going to impact my life, and he said, ‘No, you’ll be able to go back to whatever you like,’” Wills recalled. “Then he asked, ‘What do you do for a living?’ I said, ‘I’m a professional musician,’ and he said, ‘Oh, no, this is going to be really hard for you.’”

After about a year of rehab, Wills moved on to visual art, which felt like a natural evolution for him.

He studied at the University of Georgia, then went to grad school in Iowa. Today the 32-year-old Chicago native lives in Lawrence and splits his working hours between his studio in Kansas City, his home in Lawrence and teaching at Washburn University.

It was during college that he started writing to prisoners. At first it was a person he knew, then he moved on to writing strangers.

Through databases and sites such as WriteAPrisoner.com, he began by finding 10 prospective pen pals. He sent out letters, thinking he’d get maybe one response, if he was lucky.

It grew from there. Prisoners asked him to write other prisoners. He had events and shows where writing to the incarcerated was an activity for visitors.

Once, he wrote to every prisoner in the Anamosa State Penitentiary in Iowa. More than 850 postcards. He illustrated each one, too.

The stimulus for that project was a message he received back over and over.

This is crazy — this is the first time my name was ever called at mail call.

“One said, ‘I thought it was a mistake. I’ve never received mail and I’ve been here for 20 years.’”

Put a pin in that and imagine: We live in a world where we have instant access to everyone we know via a device in our purse or pocket. And other human beings in the same state are going 20 years — not 20 minutes, 20 years — with no contact from anyone other than the people around them. It boggles the mind.

“When you start reading the letters, they’re rich with content,” he said. “They come on all kinds of different paper. Sometimes they’ll send you a letter or a drawing on the back of a denied appeal request. The information on the other side of that becomes a living document.”

When he asked for prisoners to send him paper airplanes for this exhibit, that’s all he requested — a simple paper airplane. He didn’t ask for them to be decorated or adorned with sayings. Yet they are.

“If we go through them all, and just regular, white paper airplanes? I have maybe three,” he said. “They are just loaded with poems and short stories and drawings.”

Wills said with more than 2 million people incarcerated in the United States, nearly everyone knows of someone who is in prison. Creating positive relationships with them before they’re released is where a free society can improve, he said.

Missouri is a great example, he said. Beginning this year, Missourians can legally buy marijuana, yet there are people in prison for marijuana-related crimes.

“So the idea of incarcerating people and housing them and separating them from family for something that’s no longer even illegal or violent, is something that’s an old idea,” Wills said. “I don’t see that it’s directly correlational to how incarceration is creating a safer world, really.”

Sometimes prisoners ask him for help. Instead, he just offers encouragement and reiterates that he’s an artist. If someone talks about a raw deal, he tells them to keep working. If someone has a parole denied, he encourages them that maybe they’ll succeed next time.

“I really try to be cautious about my position,” Wills said. “Letter writing to people in prison — you’re putting yourself in a pretty powerful position.”

He has critics. Some people have mailed him to say they can’t believe he’s doing this, that he’s glorifying violence, he’s condoning murder.

“I’ve had a couple of people who come out swinging against the project,” he said. “People have hated things I’ve done my whole life — I’m very comfortable with people disliking me. But I also get letters from people’s wives who say, ‘My husband’s so excited that he got to participate, thank you so much.’”

Wills has plans this year to correspond with 10 new prisoners and document the conversation for another archival exhibit. He also is pumped about another work: sending white boxes with ink-covered objects up in the air with weather balloons and discovering what kind of patterns and designs they make as they rise and fall.

The paper airplane became a perfect physical metaphor for freedom or flight. And, Wills said, the process of writing is another means of escape.

“There’s something about receiving a birthday card, right? Or receiving any kind of mail that’s not a bill,” he said. “When you have the joy that someone has sat down and written a little something and then getting it in the mail? That process, that time that it takes to travel, it gathers and builds its own momentum. By the time the person receives it, I think that you get excited about a letter because of the entire voyage that it had to take.”

Some have asked if he writes to prisoners out of a religious conviction. He said he grew up in a religious family and has great respect for religion, but that’s not it.

“A lot of people have said that what I’m doing is like evangelism,” he said. “I think it’s a human duty. I hope that the project is more about how we treat each other as humans. I just want to help somebody.”