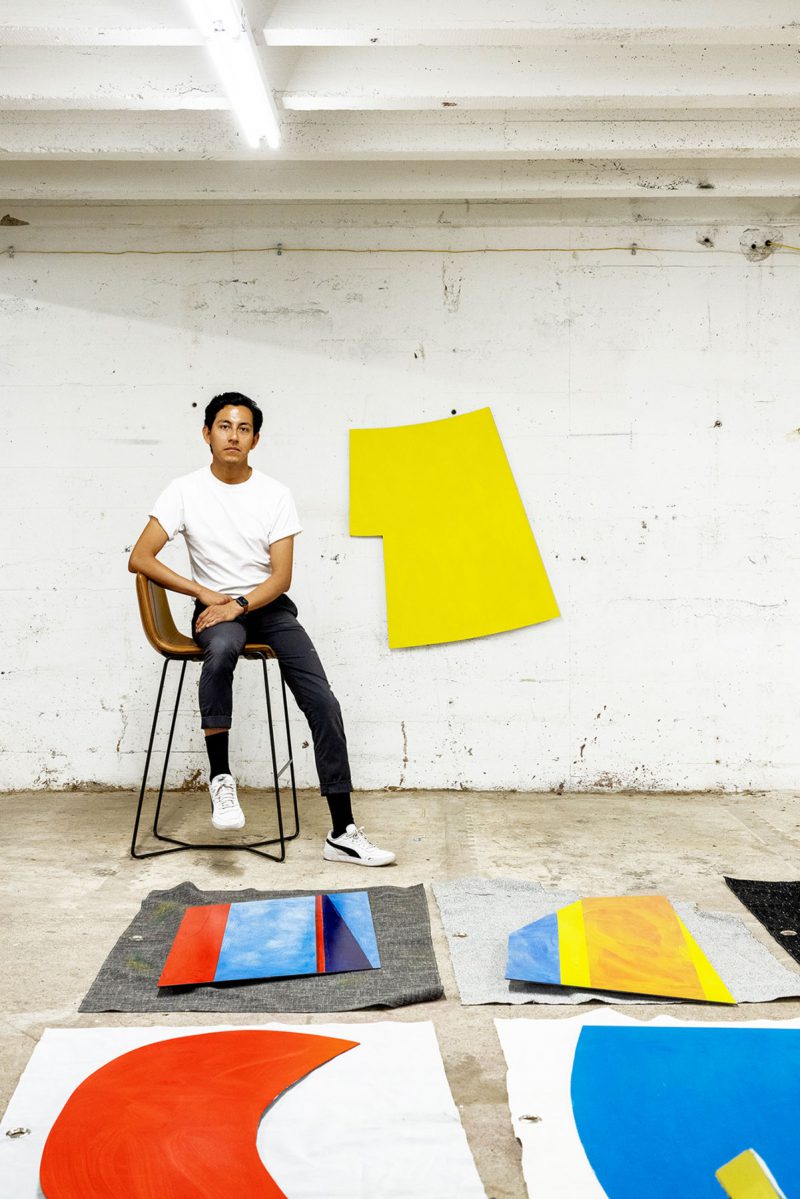 The Guatemalan-Born Artist, Whose Own Work Explores Issues of National Identity and Belonging, Is Working to Heighten the Visibility of Latinx Artists in KC

Cesar Lopez is mastering the art of the hustle. Balancing full-time employment and a flourishing art career? No sweat. Promoting cultural programming in Strawberry Hill? Yes, please! Building a network of like-minded Latinx artists and working to advance their visibility? Done and done.

A native of Guatemala, Lopez immigrated with his family to the Midwest as a child. After graduating from the Kansas City Art Institute in 2019, he remained in Kansas City to pursue his dream of a creative life. And folks are taking notice.

In his painting practice, Lopez explores issues of national identity and belonging through the lens of geographic signifiers. Though much of his work has the look of hard-edged abstraction, there is a deeper focus that lies beneath. In the formalism of his work, Lopez says he is seeking a sense of control and stability in opposition to the trauma and chaos that he explores thematically. Rooted in the symbols of flags, globes and grids, his compositions are an attempt to map out his own place in the world. By seeking to orient himself, he hopes to open a broader conversation to share the stories of other artists.

Not satisfied with growing his own visibility, Lopez has harnessed his seemingly boundless energy and enthusiasm to advance a burgeoning curatorial practice as well. “La Onda,” a group show of Latinx artists set to appear in multiple venues across the metro area, is his latest project. Referencing the Spanish phrase “the wave” or loosely, “what’s going on,” Lopez and collaborator Aquetzali “Kiki” Serna have assembled a collection of works that speak to both the individual and shared experience of artists from the Latin American diaspora. Though “La Onda” is one of only a few Latinx-centered group shows to appear outside of traditional venues like the Mattie Rhodes Center, it signals a rising trend of visibility for artists of color in Kansas City.

Rooted in the symbols of flags, globes and grids, his compositions are an attempt to map out his own place in the world.

I sat down with Lopez to discuss his art practice, curatorial goals, and what it means to clear a path for broader representation in the Kansas City gallery scene.

C.J. Charbonneau: What drew you to the practice of art?

Cesar Lopez: I think it was the ability to sort of be in control of your environment, not only of the things that you made but what the context was around them. Specifically, whether it’s curating or your work, your studio practice defines your thinking. My environment before had been defined by so many other factors, really, ultimately, none of it by me, (and) that frustration grew into wanting to find a way to control my own narrative.

CJC: You have said that exploration of the symbols of geography has helped you to inform your understanding of place, and to reconcile the duality you feel as an immigrant.

CL: It seems like a conversation on my end that only exists in art. When I have this conversation with my mom, or with other people who have this experience that are not artists, we’re talking about it but through different means, like “Oh, we aren’t welcome here,” or “We’re seen like this,” but I can’t have that conversation with someone who doesn’t share that experience. So I think that the symbols of geography, whether it’s a map or a globe, let me say, “Hey — look at this map, it’s split this way, or it overlaps this,” and I can use that as sort of a metaphor for articulating our experience. Or I should say, specifically my experience. But I’m looking for a bigger conversation.

CJC: Something that others can relate to.

CJC: How are you finding other artists to work with?

CL: Most of it is peer to peer or having some shared experience. But I do try to get outside my circle. When I meet someone new, I’ll be like “Who do you know that I need to talk to?” Who’s being slept on, so to speak. I want to get names and go look.

CJC: Can you talk about the “La Onda” show?

CL: It started from wanting another show of Latino and Latina artists. I think you can’t have too much, you can’t have enough (laughs). So I started shopping the idea around, not just with artists but other Hispanic people in general. What they thought, what the reception could be, and I think enough people got behind it like, “We haven’t had something like this in a while, so maybe let’s shoot for it.” I was starting to shop the idea to other galleries, in addition to saying, you know, “How many of your artists shown in the last year have been Latino or Latina artists; throw me a number. Ok, it’s not big enough. The world might open up this summer; would you be interested in cooperating and supporting this decision?” And some people were like, why not? I did shop the idea around at multiple spaces, and I still am now.

CJC: It’s powerful to see a majority-Latinx show in mainstream galleries, simply that act of visibility.

CL: Absolutely. I think the conversation is just getting larger and larger, and I hope that this is a reflection of that. (Before) it was almost like, “These things go here.” And I think eventually, some of us were like no, that’s not the ONLY place we go. Let me show you, right? Instead of telling you, let me show you.

CJC: What do you hope to put forward with this series?

CL: La Onda means “What’s going on,” which is a very relatable phrase, and what I wanted out of this idea is for people to tune into these narratives. Ideally, I would like for people to become aware of the wide variety of stories. Understand who you’re talking to, tune in, in a sense, to these artists and have a conversation.

In addition to “La Onda,” Lopez is curating shows at Curiouser & Curiouser, a small gallery space in the Strawberry Hill area of Kansas City, Kan. His art has been featured in a number of local group shows, and he opened his first solo exhibition, “Standard Bearer,” at plug gallery in July 2021. The following Artist Pages feature examples of his recent work.

C.J. Charbonneau (she/her) is a writer, curator, artist, and advocate based in Kansas City. She holds a master’s degree in art history from the University of Missouri-Kansas City and is the co-director/co-curator of plug, an independent artist-run space.