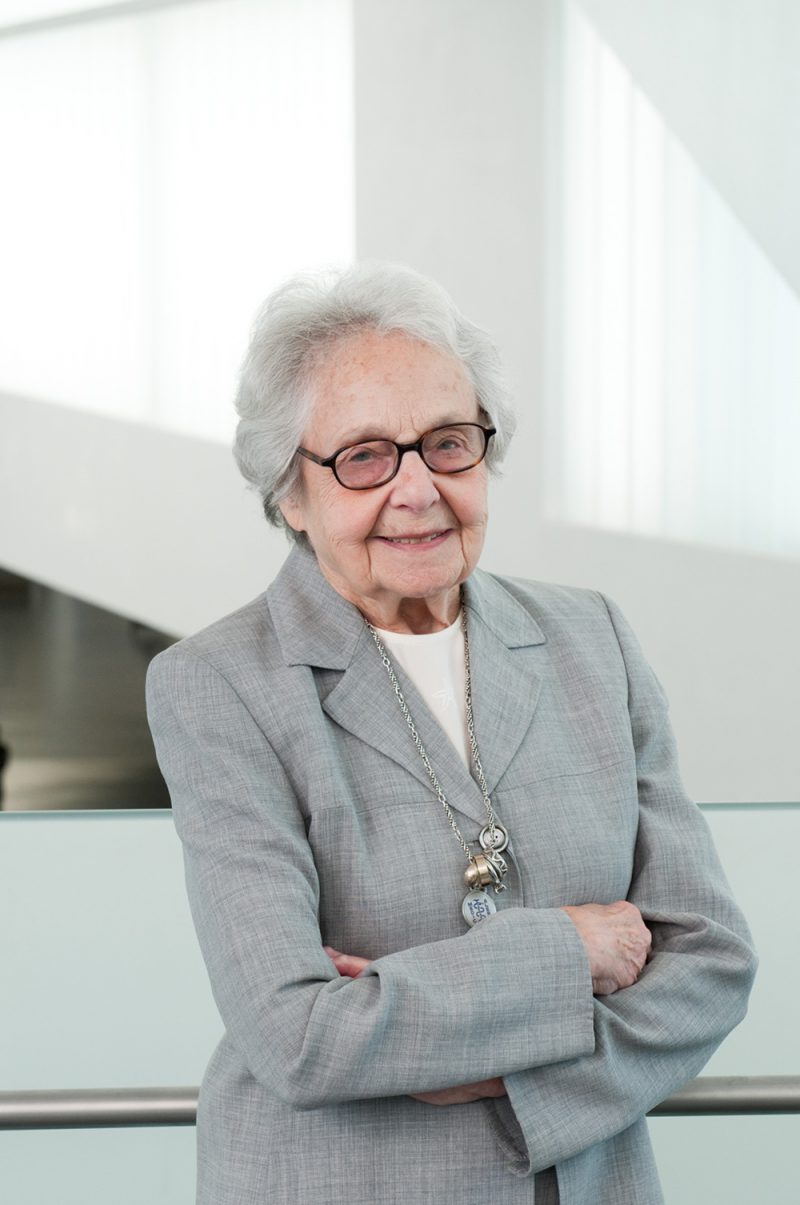 (The Nelson-Atkins Museum of Art)

Estelle Sosland, my dear friend for many years, and benefactor of The Nelson-Atkins Museum of Art for many more, passed away in April; she had a long, wonderfully rich and generous life. On April 19, family and friends gathered at Mt. Carmel Cemetery, and on Zoom, for a graveside service.

Born in Kansas City in 1925, the only child of Bertha and Meyer Glatt, Estelle lived to exactly one month shy of her 96th birthday. During her nearly 73-year marriage, she shared a love of the arts and community with her husband, Morton Sosland (1925-2019), and together they inspired decades of civic energy and pride.

Estelle and Morton Sosland brought beauty and depth to the city, notably with their 1994 gift of the Shuttlecocks by artists Claes Oldenburg and Coosje van Bruggen, now iconic features of the Nelson-Atkins sculpture garden, as well as the 32 magnificent works by Native American artists from the Northwest Coast that transformed the museum’s collection in 2008 and made the galleries we see today possible.

Estelle’s singular presence as a museum volunteer began in 1958 and spanned more than 50 years. As a young mother of three children — her beloved Amy, Elizabeth (Betsy) and Charlie — she managed the pioneering Sales and Rental Gallery on the museum’s mezzanine with friends K. D. Bunting and Diana James.

In the early days of the 20-plus year enterprise, few, if any, commercial fine arts galleries existed in Kansas City, and the trio of entrepreneurial friends took the opportunity to bring extraordinary works to the community at-large, as well as the area’s emerging collectors. They offered rental pieces from select local and regional artists and sold works of national and international prominence — everything from Chinese scrolls to Old Master paintings to Edward Hopper drawings to fine English crockery.

I still meet people today who remember the more than two decades of special exhibitions Estelle and her two colleagues mounted in the gallery in service to the museum, artists and community. Former Director Marc Wilson tells the story of a Monet presented in the gallery and now in the collection of a major art museum.

With changes in the fine arts landscape, the museum closed the S&R gallery in the early 1980s, and for 27 years following, 1981 to 2009 (with the exception of 1988), Estelle served as a trustee on the museum’s board of directors. For the first 10 years she carried the title of associate and later, university trustee. For three of these years, May 2004 to April 2007, she chaired the Committee on Collections.

In May 2007, Estelle became the chair of the Board — the first woman to assume this role in the 74-year history of the institution, and she served for two years, until 2009.

Her devotion to the institution over the long, long span set an example for the community. Estelle encouraged confidence
and loyalty; she catalyzed support with her intelligence, integrity, and goodwill.

Last year, during the pandemic, Charlie and Jeanne Sosland, their three children and spouses, and “the grands” (as Estelle lovingly referred to them) — six great-granddaughters and one great-grandson — stood below the windows of Estelle’s ninth floor apartment at The Walnuts, calling out greetings to her on the occasion of her 95th birthday.*

Rabbi Alan Londy officiated at the April 19 service for Estelle, and he captured her essence in his words following:

[Estelle] believed one’s life speaks for itself. We will respect her wishes but allow me to share some brief words of the Torah.

In Jewish tradition, names have great significance. Among Ashkenazic Jews, a person is named after a deceased relative, and, it is the hope, the person given the name will reflect the ideals of that relative. Estelle’s Hebrew name was Esther, daughter of Meir and Beracha, and each of these names reflects an important part of Estelle’s being and a profound personal quality.

Esther is the hero of the story of Purim, and through her unique feminine strength and courage, she was able to save the Jewish people. She represents a history of biblical women who used their strengths and talents to change the world. Estelle exemplified the feminine strength of Esther, and this strength is often so transformative. Meir means one who brightens or shines, and this name reflects Estelle’s ability to bring enlightenment, wisdom and insight into the world and into her work to impact the world. In all she did, Estelle brought reason, thoughtfulness and vision. The name Beracha means blessings and has two dimensions. The first is the recognition of the gifts in our lives, and the second, the use of these to bring blessings to others.

Esther represents feminine strength. Meir illustrates the power we have to bring enlightenment. Beracha expresses our appreciation of the world around us and our need to bring blessings to all who we encounter. Estelle’s name reflects her spirit in the world — who she was — and it is hopefully a source of inspiration for us now and will be for generations to come.

Gaylord Torrence is Fred and Virginia Merrill Senior Curator of American Indian Art at The Nelson-Atkins Museum of Art. He led the creation of the institution’s galleries, opened in 2010, and curated the celebrated 2014-15 exhibition “The Plains Indians: Artists of Earth and Sky.” Most recently, he guest curated the new installation of Native American art at The Metropolitan Museum of Art. He is the author of “The American Indian Parfleche: A Tradition of Abstract Painting.”